With the Summer Olympics on 2021’s agenda (after a one-year pandemic delay) there was no shortage of big sports moments this year. Perhaps none bigger than Canada’s National Women’s Soccer Team – with a handful of Durham Region players in the lineup – bringing home the gold.

But Durham athletes shined in other places, from scoring tournament-winning goals to breaking down gender barriers to standing up to racism.

Here then, are the biggest sports stories of the year in Durham Region from the virtual pages of indurham:

This was the time the women stood up to win gold for their long-serving captain, Christine Sinclair, after back-to-back Olympic bronze medals.

When the final whistle blew after Julia Grosso scored the decisive penalty in their gold medal victory over Sweden, the reaction was pure joy for the players – including four from Durham – and the fans alike. The fact the team knocked off the American in the semi-final made the gold medal victory even sweeter.

Oshawa Generals not for sale

This story gained plenty of traction, especially in hockey-mad Oshawa, after team owner Rocco Tullio insisted he wasn’t going to sell the club and threatened to move it somewhere else in Durham if the city didn’t find him some more room for his hockey operations.

A suggestion to move the Oshawa Hockey Hall of Fame out of the Tribute Communities Centre and into downtown Oshawa was rejected by the city.

The former Whitby Wolves player made history this year by becoming the first woman to work the lines at OHL and American Hockey League games.

Welsh was part of a select group of women chosen to act as referees and linespersons at junior and professional games this season, breaking down barriers that long-needed smashing down. 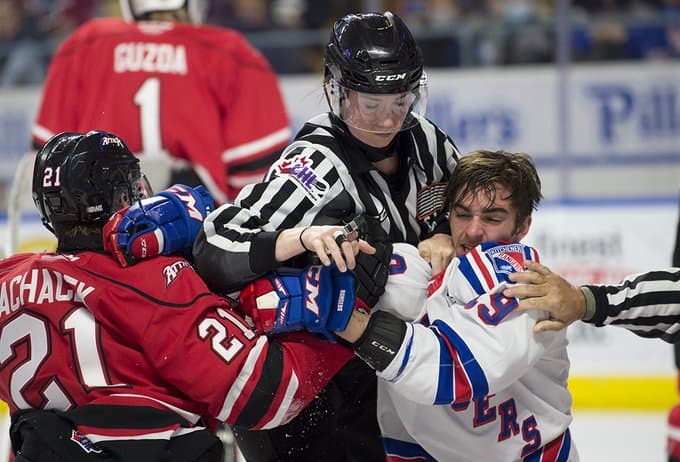 Jessica Klimkait, the reigning world champion in the 57 kg category in judo, became the first Canadian woman to step on the Olympic podium in judo when she earned the bronze medal in Tokyo.

The Oshawa Generals rookie sensation was the second-leading scorer and overtime hero for Team Black at the Capital City Challenge in Ottawa, Canada’s U-17 championships.

The tournament, which also featured Canada’s National Women’s Team, was a coming out party for Ritchie, who set up the tying goal in the final seconds before scoring the winner on a breakaway.