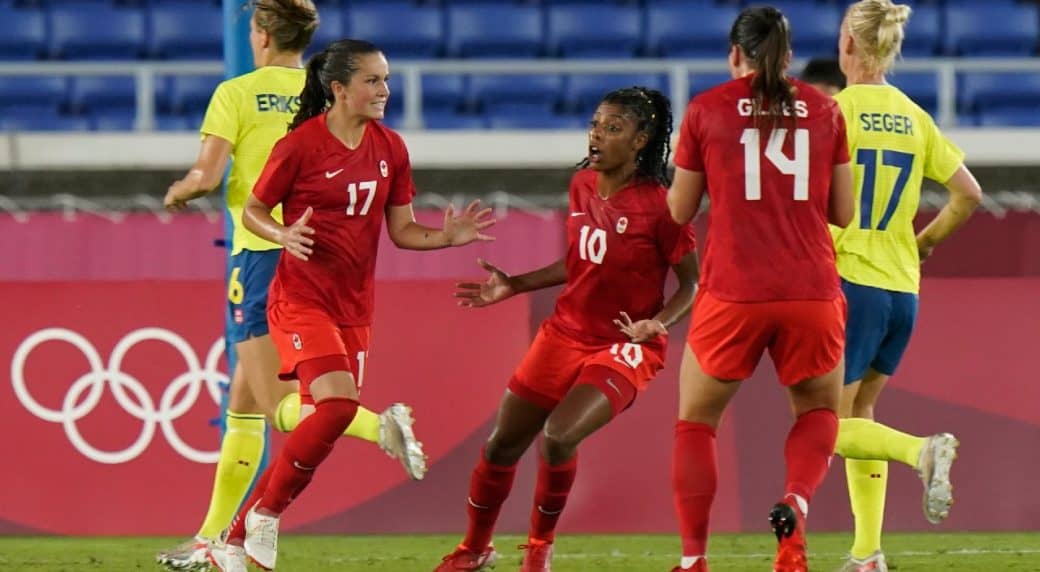 They bent but never broke and thanks to the heroics – again – of ‘keeper Stephanie Labbe and a timely, pressure-packed penalty kick by Julia Grosso, Canada’s Woman National Soccer team are going home with the Olympic goal medal.
The Canadians made history this morning by beating Sweden 3-2 on penalties after a 1-1 nail biter of a match in Yokahoma, Japan.

Sweden had the most of the chances in regulation, outshooting Canada 24-14 and winning the possession battle 54-46, but the Canadian defence, led by Kadeisha Buchanan of Brampton, Ashley Lawrence of Caledon and Allysha Chapman of Courtice, held firm and kept the Reds in the game.

Stina Blackstenius, who scored to eliminate Canada from the 2019 World Cup, opened the scoring for Sweden in the 34th minute and the Swedes, silver medal winners in Rio, were well deserved to be up at the break.

The turning point of the second half came in the 65th minute when football legend Christine Sinclair was taken down in the box. No penalty was initially awarded but after a VAR review, Referee Anastasia Pustovoitova pointed to the spot and Jessie Fleming – for the second game in a row – coolly converted to square things up.

The Canadians drew some life from the goal and went on the attack for a spell, but Sweden eventually resumed control and Labbe and the Canadian defence had to be especially strong in the two 15-minute extra periods after regulation time expired.

Sinclair, who was fouled numerous times during the match, took herself out of the game in the 86th minute for 20 year-old Jordyn Huitema.

Labbe came up huge on the first Sweden shot but Swedish ‘keeper Hedvig Lindahl was equally sharp, and the Swedes had a chance to win the match when the fifth shooter, captain Caroline Seger, stepped up to the spot. But Labbe came up huge again and she did it again on the next shooter, setting up Grosso to give Canada the gold with a decisive strike.

Grosso was eleven years old and watching on television when Sinclair led Canada to its first medal in London in 2012.

This is the third consecutive Olympic medal for Canada in Women’s Soccer, but after two successive bronze medals, the Canadians wanted to change the colour of their medals AND win it all for Sinclair, who has been playing for her country since some of her teammates were just learning to walk.

Today in Japan, the team accomplished both.