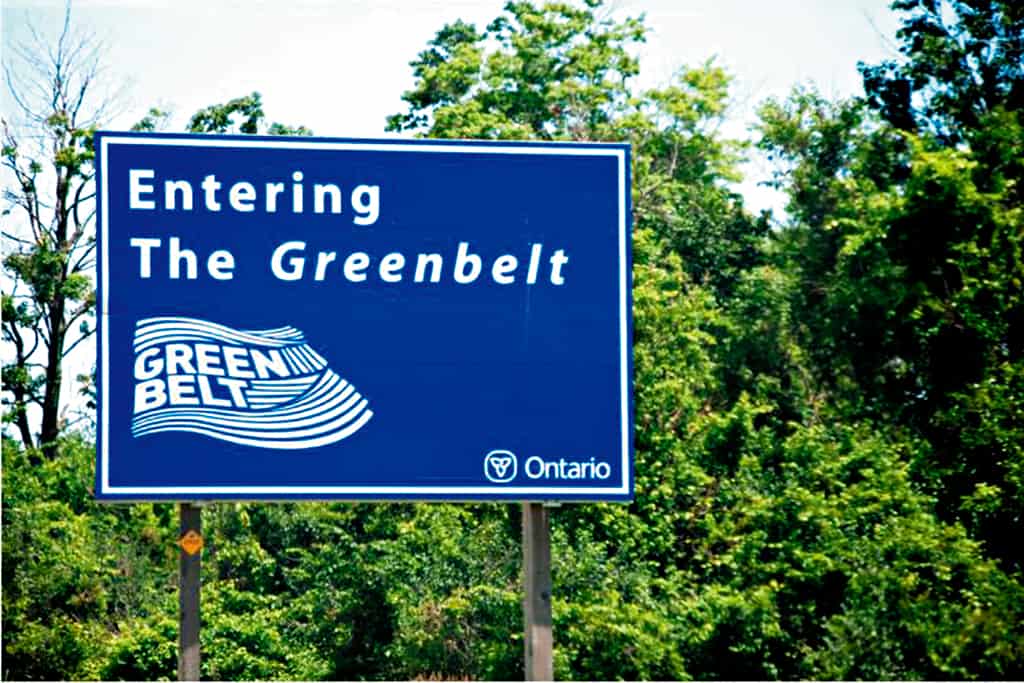 Editor’s note: This article has been updated to remove some references to Bill 23. The original article said Greenbelt development is included in the bill. We regret the error.

Environmental Defense, one of Canada’s largest environmentalist groups has called for an OPP investigation into allegations the Ontario Government tipped off developers about what parts of the Greenbelt would be opened for development when 7,400 acres were removed on Nov. 4.

The Greenbelt land swap was made public last month, shortly after another controversial bill, Bill 23, was introduced in the Legislature on Oct. 25. Bill 23, which removes development charges from some new residential units, was made law on Nov. 28 before consultation in the Legislature had wrapped up.

The Greenbelt swap–which removes 15 areas (or approximately 7,400 acres) from the edge of the Greenbelt area and adds 9,400 acres, including a portion of the Paris Galt Moraine and 13 urban river valleys in the Greater Golden Horseshoe–opened up for development thousands of acres of formally protected Greenbelt lands.

Bill 23 came under heavy fire from environmental groups, First Nations leadership due to a lack of consultation, and municipalities across the province for cutting development fees and changing the approval methods.

Towns and cities have crunched the numbers and found the slashed fees would require hundreds of dollars in higher annual property tax bills to offset the lost income and maintain municipal services and infrastructure budgets.

Shortly after the Greenbelt swap was announced, numerous media outlets conducted studies on who owned the land now available for development.

These outlets found developers had bought up much of the previously protected land opened for low costs. The most recent purchase was made in September, just weeks before the bill was introduced.

The revelations led Ontario’s opposition parties to call for an Integrity Commissioner investigation into whether the locations were leaked. Premier Doug Ford and Clark have denied any wrongdoing.

On Dec. 14, a few weeks after the bill passed, Environmental Defense and Democracy Watch called for a formal OPP investigation into “whether the provincial government’s apparent leak of secret plans to allow residential development on 15 specific areas within the Greenbelt amounted to a criminal breach of trust by a public officer.”

“It seems very likely that before any authorized public disclosure of the province’s plans to remove these specific lands from the Greenbelt, some government official, government MPP or employee leaked that information privately,” they said in a release.

The groups said the purchases of previously undevelopable land “would seem to have been irrational if all the parties were unaware that these Greenbelt lands would be proposed for removal.”

Ford’s own comments echo this assessment. In his first campaign in 2018, Ford told a room of developers his government would “open up the Greenbelt. Not all of it, but we’re gonna open a big chunk of it up and we’re gonna start building.”

“I’ve talked to some of the biggest developers in this country,” he told the room, “and again I wish I could say it was my idea, but it was their idea as well.”

However, once that video became public and while facing substantial backlash for his comments, Ford backtracked, saying “Unequivocally, we won’t touch the Greenbelt. Unlike other government that don’t listen to people I’ve heard it loud and clear.”

Ford appeared to keep his word at first, even expanding the Green Belt in Clarington, about an hour east of Toronto. He and his MPPs also said they wanted to protect additional lands in Pickering and Ajax, but those protections never materialized.

Ford and his government reversed course on the Greenbelt shortly after their re-election. While a housing accelerator was part of Ford’s re-election campaign platform, the 2022 budget the Progressive Conservatives ran on said it “would not be used in the Greenbelt, maintaining the government’s steadfast commitment to protecting this valued area.”

Additionally, Environmental Defence noted, “There was no shortage of existing ‘designated greenfield area’ or of ‘whitebelt’ farmland and natural areas outside the Greenbelt, and that would reasonably have led an investor to expect that the government would not breach its express commitments to never remove any land from the Greenbelt.”

Thirdly, the Environment Defense noted there was no public consultation about which areas of Greenbelt would open. The organization said the only discussions held during the 30-day consultation period were about adding to the Greenbelt.

“Removal of thousands of acres of legally protected farmland, forests and wetlands from the Greenbelt threatens us all. A government doing so in a manner shrouded in secrecy that appears to benefit a select group of property owners, including recent purchasers, needs to be thoroughly investigated by the OPP,” said Tim Gray, Executive Director of Environmental Defence.

“The Supreme Court of Canada has ruled that it damages our democracy if a situation even appears to raise questions about the integrity of a government policy-making process, and that law enforcement must be strict and strong to prevent this damage, so given the Greenbelt policy change smells badly, the OPP must investigate,” said Duff Conacher the Co-founder of Democracy Watch.