What’s Happening with the Lakeview Walmart in Mississauga? 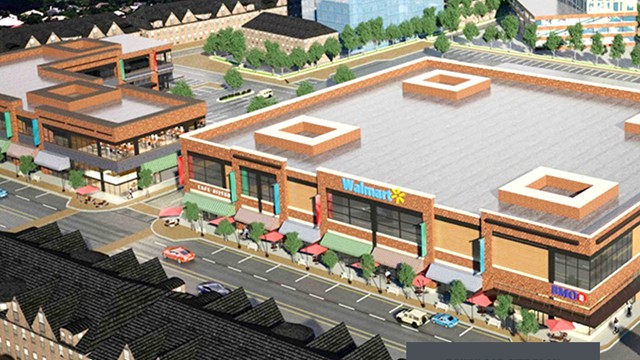 Walmart has been top of mind for many people in Mississauga lately, especially in light of the news that the Erin Mills Town Centre location is slated to open in early December.

With a new location set to open just in time for the holiday season, it’s only natural to wonder what’s going on with the controversial store that was, until somewhat recently, about to call the developing Lakeview district home.

Back in May, reports emerged that Trinity Development–the company behind the grand commercial plaza that was set to house Walmart–was noticably quiet on whether or not the hotly debated, scaled-down superstore was going to be built at all.

Insauga.com recently reached out to Trinity for an update, but did not receive a response before publication time.

That said, Trinity’s website is still showing a Walmart in its mockup.

As for whether or not the city has any intel, it doesn’t look like they’ve received any confirmation that Walmart will be a part of the development.

“The development itself has been approved for some time as site plan approval was issued in December of 2015 and building permits were issued in March of 2016,” says Carley Smith DeBenedictis, senior communications advisor with the city of Mississauga. “As for the tenancy, we have no confirmation from Trinity Development Group as to who will occupy the anchor tenant space.”

While the Walmart was always controversial, the confusion over whether or not it’s going to open is likely causing just as much (if not more) local vexation than the store’s once imminent (or so it was assumed) arrival.

Now that it has been confirmed that the nearby No Frills in neighbouring Port Credit is closing down this December, some residents who might have been on the fence about the superstore might be hoping for a local-ish option for affordable groceries (which Walmart does typically offer, even in smaller-scale locations).

We’ll keep you posted on any updates.