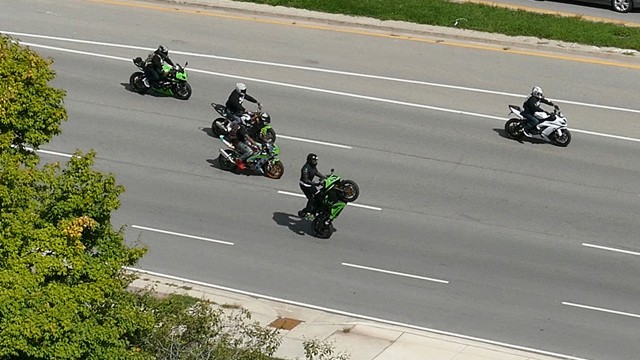 Over the past year, police have responded to multiple calls regarding large groups of motorcyclists purposely snarling traffic to engage in elaborate stunt driving on busy highways in the Greater Toronto Area.

Back in March, a Mississauga man was charged in connection with dangerous motorcycle riding incidents.

Now, the Ontario Provincial Police (OPP) have revealed that 48 charges have been laid following an investigation into other similar incidents.

“Thirty-three motorcyclists have died on OPP patrolled roads in 2017,” said OPP Sgt. Kerry Schmidt in a video. “Just this past week, the OPP laid 48 charges following a three month investigation into dangerous motorcyclists who were performing stunts and riding erratically in the GTA.”

10 people facing 48 charges as a result of #motorcycle #stuntdriving throughout #GTA. pic.twitter.com/ekV7UWDZUC

Schmidt added that five motorcycles were seized as offense-related property and that an additional six charges were laid in relation to illegal drug offenses.

“In total, these 10 people and others face a total of seven charges relating to highway traffic offenses, including driving while suspended, obscured/missing license plates and more,” he added. “Seven of the 10 accused have made their first appearances in court while three others are outstanding with warrants.”

Schmidt said that, on 20 occasions over the summer, police interrupted dangerous riding activity on busy provincial highways, including the Gardiner and the DVP.

“Dozens of riders on bikes [were] participating in numerous coordinated stunts that purposely snarled traffic and put the lives of participants and safety of other road users and pedestrians in jeopardy,” he said.

An investigation into the incidents is still ongoing.

Here’s some more footage of the stunt riding, courtesy of the OPP.