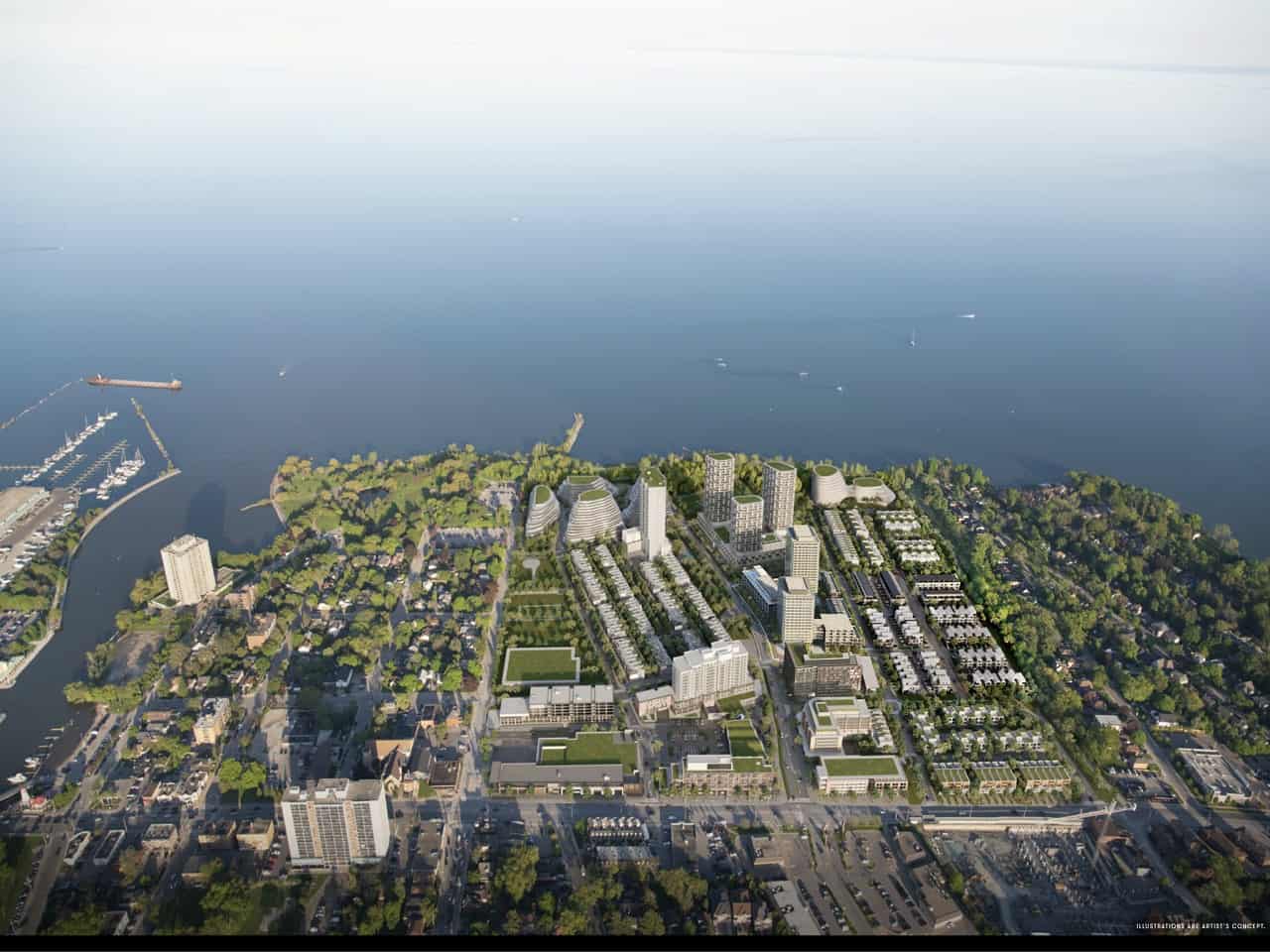 Part of Mississauga’s waterfront will be glowing–literally–for the next three weeks.

A travelling Portals Art Installation featuring five 10-ft.-tall hexagon structures that are lit up at night is being unveiled today (Aug. 8) at JC Saddington Park in Port Credit.

The temporary display, powered by solar LED lights with mirrored cores, is being brought to Mississauga’s lakefront by the developer building the huge new Brightwater community adjacent to the park.

The latest version of the installation, which has previously been displayed in Toronto and Ottawa, has been given a distinct Port Credit touch courtesy of five Mississauga artists chosen by a jury in a recent artists’ competition.

Port Credit West Village Partners (PCWVP), which is developing the award-winning 72-acre master-planned Brightwater community, says it brought the artwork to town as a way to encourage residents and visitors to explore the waterfront. 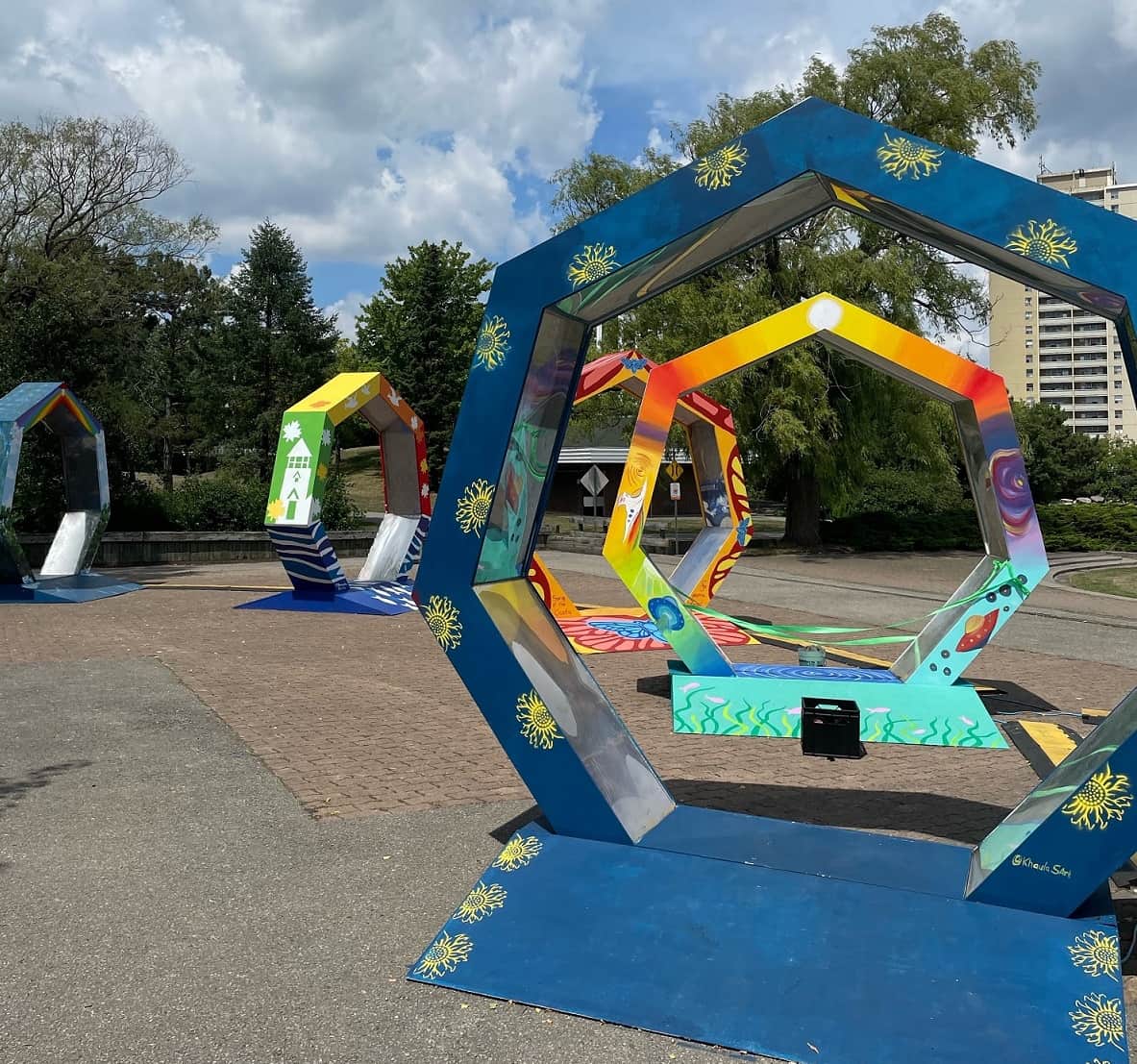 These five pieces of art will give Port Credit’s waterfront a “big glow” for the next three weeks. (Photo: City of Mississauga)

Mayor Bonnie Crombie and Ward 1 Councillor Stephen Dasko were among those on hand for the art unveiling this morning.

The Brightwater community, when completed at Mississauga and Lakeshore Rds., is expected to contribute significantly to the transformation of Mississauga’s waterfront.

Rising up on land that was previously long left dormant after its early use as an oil refinery, the development will feature 3,000 new homes, 300,000 sq. ft. of commercial, restaurant, retail and office space, and 18 acres of greenspace.

Taking advantage of the natural location, developers have included a nine-acre waterfront park, a trail system and pedestrian-friendly mews and promenades as part of the large greenspace.

The Brightwater Village Square will feature outdoor seating along with various retail and restaurant options. PCWVP also said earlier that the square will be home to a number of attractions throughout the year, including local farmers’ markets, pop-up celebrations and, during the holiday season, a Christmas tree.

Officials say the Brightwater project actually began some three decades ago when the City of Mississauga started to visualize what a revitalized waterfront could look like.

Also part of the huge development is a nine-storey boutique condominium complex with 160 units, and 16 townhomes.

This past June, the developer released details of another component of the huge project. The Bridge House series will see three highrise buildings connected by glass bridges planners hope will provide an iconic new look to the community.

Bridge House North, Bridge House South and Bridge House East will feature two main towers standing at 15 storeys and 19 storeys that will come together in a hotel-inspired amenity deck located on the sixth floor of one of the towers. This deck will feature a rooftop swim spa with barbecue, seating and a dining area that will overlook a promenade, park and Lake Ontario.

The most striking feature, planners believe, will be two glass pedestrian bridges that will allow residents to move freely between the buildings to share the amenities, which will also include a sauna, fitness centre with stretch room, and co-working space.