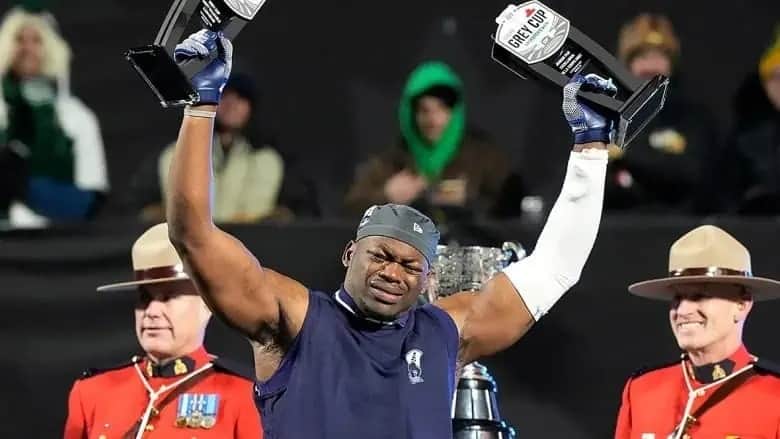 Mississauga native Henoc Muamba is bringing the Grey Cup home, and along with it a louder voice.

The former Father Goetz Secondary School student, who three weeks ago was a key part of the Toronto Argonauts’ thrilling Grey Cup victory over the Winnipeg Blue Bombers, is determined to make a difference in the lives of others now that he speaks as a double award-winner in the CFL’s most important game of the year.

The 33-year-old middle linebacker was a main cog in the Argos’ nail-biting 24-23 win as he captured both game MVP honours as well as taking home the Most Outstanding Canadian trophy.

But the biggest thrill of all, Muamba clarified, is staking claim to the Grey Cup itself.

And he’s planning to bring the iconic trophy to Mississauga.

“Absolutely we will be bringing the Grey Cup to Mississauga. I’ve been in touch already with Goetz and we’re trying to find the time, we’re talking to Mayor (Bonnie) Crombie as well,” Muamba told insauga.com publisher Khaled Iwamura in an Instagram interview earlier this week.

“One of the biggest things I want to be able to do is impact the next generation, and I want to utilize my platform and now I have the Grey Cup around…it makes your voice sound a little bit louder and I’m excited for the impact it’ll possibly be able to have.”

Muamba, who’ll be forever remembered as well for sharing the Grey Cup post-game victory stage at Mosaic Stadium in Regina with his four-year-old daughter, Thea, says the entire experience is the “top of the top” for him in his career.

“Best game I’ve ever been a part of, one of the coldest for sure, the most exciting. And walking off the field with two awards and the Grey Cup, there’s no better feeling in the world, really. So, to me when you talk football and my career, top of the top,” summarized the 6-foot, 230-pound defensive stalwart for the Double Blue, who intercepted a pass late in the Grey Cup contest to clinch MVP honours.

The CFL veteran, whose only other Grey Cup appearance came in 2011 as a member of the Blue Bombers, who lost that year, told cheering fans at an Argos’ championship rally two weeks ago that his club was brimming with confidence heading into the final against two-time defending champion Winnipeg.

“From the very beginning, from the time we landed in Regina, we believed that we were the better team,” Muamba told the  crowd, adding neither the frigid temperatures nor the heavily-favoured Blue Bombers worried the Boatmen.

Nor should the Argos be worried they’ll soon lose the Grey Cup MVP.