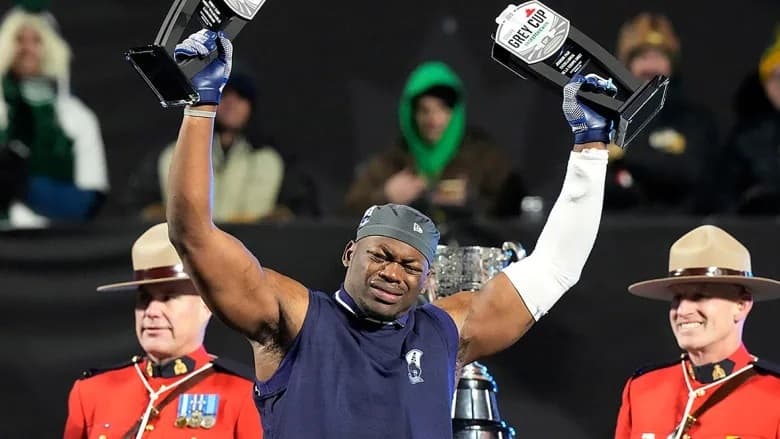 For professional athletes, things don’t get any better than they did last night for Mississauga native Henoc Muamba.

Moments after his Toronto Argonauts won the 109th Grey Cup with a thrilling come-from-behind 24-23 nail-biter over two-time defending champion Winnipeg Blue Bombers, the 33-year-old middle linebacker knelt on the makeshift stage at Mosaic Stadium in Regina, Saskatchewan on Sunday night and the tears flowed.

And why not. It was the former Father Goetz Secondary School student’s first Grey Cup win in his long career–he made one previous appearance in the CFL final back in 2011 as a member of the Blue Bombers–and he was a crucial part of his team’s success.

Muamba pulled off an impressive triple victory, sharing in the team’s success as well as being named both the game’s MVP and Most Outstanding Canadian.

To top things off, the 6-foot, 230-pound defensive stalwart for the Double Blue, who intercepted a pass late in the game and earlier nearly had another pick, was joined on the victory stage by his four-year-old daughter, Thea.

The two shared several emotional embraces, the point made clear that winning with and for family makes victory that much sweeter.

“Still trying to figure out if this is real life,” Muamba said during a post-game press conference flanked by his daughter and both individual honours trophies.

With the Argonauts leading by just one point, Muamba intercepted Bombers quarterback Zach Collaros late in the fourth quarter to halt a potential game-winning touchdown drive by Winnipeg.

Muamba’s crucial pick with 3:20 left in the contest put the Argos at Winnipeg’s 43-yard line.

The Mississauga native also had three tackles and a pass knockdown in helping the Boatmen secure the win.

Muamba, the all-time leader in tackles at St. Francis Xavier University in Antigonish, N.S., became the second CFL player to claim both individual awards (running back Andrew Harris in 2019).

Born in Kinshasa, Congo, Muamba grew up in Montreal and Mississauga. His brothers Cauchy and Kelvin also played in the CFL with Montreal and Saskatchewan, respectively.

Muamba was a Blue Bombers’ rookie in 2011 when Winnipeg lost to the B.C. Lions in the Grey Cup. He didn’t appear in another Grey Cup until Sunday.

“Eleven years of hard work. Eleven years been playing this game and all I ever wanted was to be great,” Muamba said. “To reach the pinnacle, there’s nothing like it.”

Muamba wears a bracelet that reads “measured by character” given to him by the Bombers team chaplain when he played there.