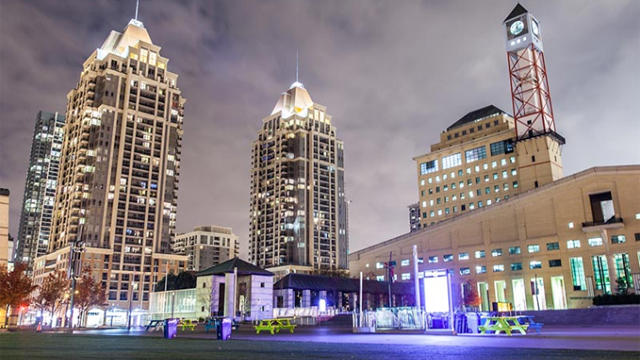 Canada’s sixth and ninth largest cities are rapidly becoming their own cities and not just suburban satellite municipalities of Toronto. With both Mississauga and Brampton incrementally inching towards the 1 million inhabitants mark within their borders, as well as growth across the GTHA, the need to have the necessary infrastructure to accommodate all those people is an important issue on top of mind for elected officials and the public.

This past week the federal Minister of Infrastructure and Communities, Amarjeet Sohi, came to the Mississauga Civic Centre to sit down and have a roundtable discussion with Mississauga Mayor Bonnie Crombie and Brampton Mayor Linda Jeffrey on general infrastructure needs for the country, as well as for both cities. This event was sponsored by the Pearson Centre for Progressive Policy. 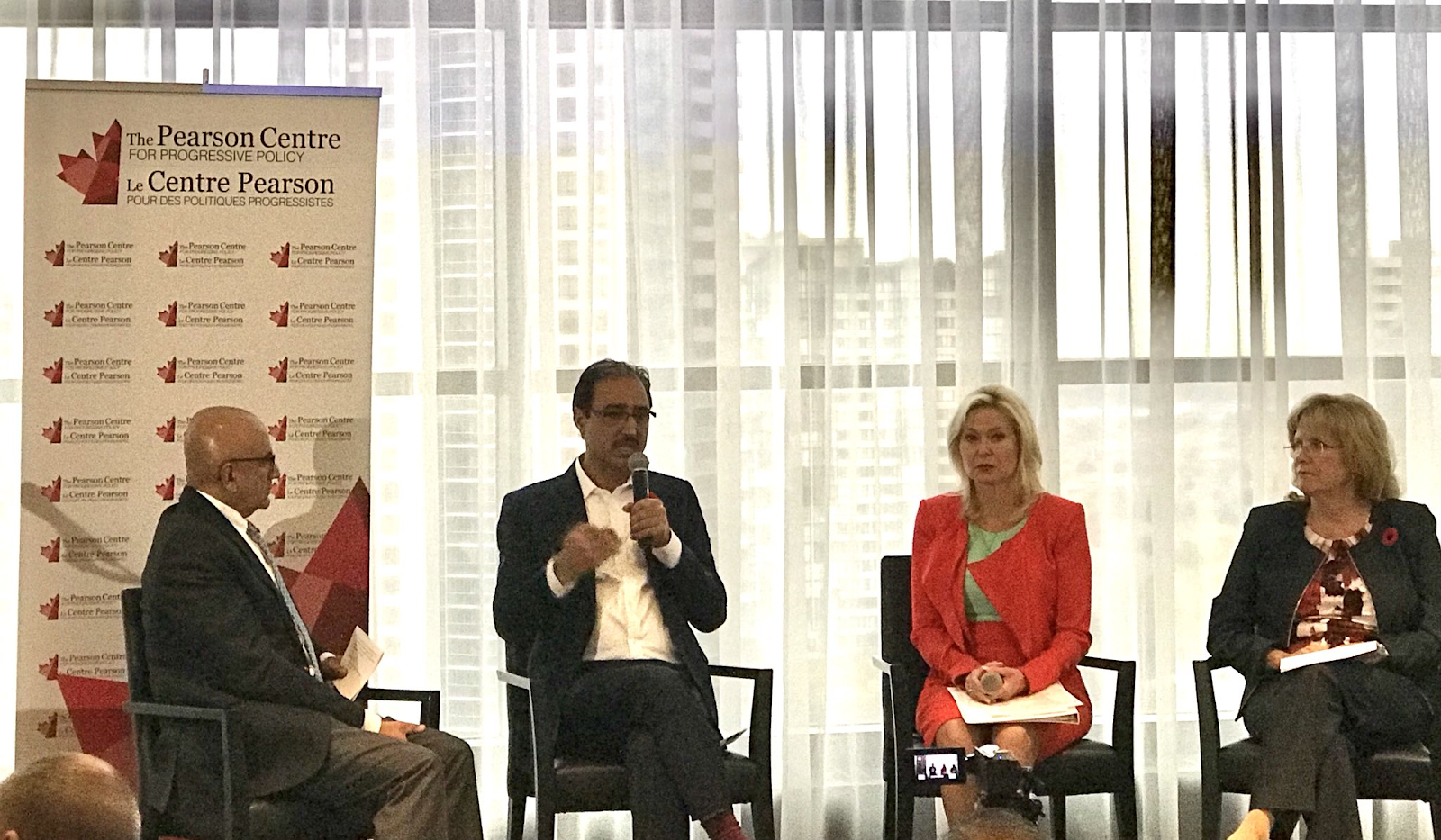 You can watch the entire event through this video from Mayor Crombie’s Facebook page:

In her opening remarks, Mayor Crombie spoke about Mississauga’s infrastructure deficit, which currently sits at around $240 million despite the implementation of a two per cent infrastructure levy in the city’s budget. Crombie is hoping that the $370 million Mississauga is set to receive over the next 10 years, depending on how the funding program is rolled out, will help to reduce that infrastructure deficit, and was very optimistic that the new method of partnership that cities have with the federal and provincial governments (a unique alignment of interests that has not been seen in previous years) will help shepherd forward the infrastructure investments Mississauga needs.

As a former city councillor from Edmonton and a bus driver operating under the Edmonton Transit system, Sohi perhaps was a bit more at home and familiar with the two mayors discussing this important issue. The minister outlined three points that he focuses on when it comes to determining federal funding for infrastructure:

Sohi mentioned how there have been some 4,000 projects across Canada costing up to $35 billion that have received approval, and that they are planning to spend $180 billion in the next decade on infrastructure. But the minister specified that when it comes to infrastructure spending, it was not just about roads, bridges or public transit projects in various cities.

The government is looking to invest in wastewater infrastructure to ensure clean water and healthy communities. They would also look at recreational and cultural infrastructure that enhances quality of life, as well as trade corridors as part of the economic piece of the infrastructure agenda. Sohi emphasized how there needs to be a flexible approach when it comes to infrastructure.

Minister Sohi was then asked about the new Canada Infrastructure Bank, which is set to open by the end of 2017. The purpose of the Infrastructure Bank is to recognize that there are projects out there that are too expensive for the public sector to pay for on their own, and that are too risky for the private sector to bear the costs. It is meant as an additional tool to build new infrastructure development by attracting private sector and institutional investors to support the transformational infrastructure that Canadian communities need, as stated on Sohi’s ministry’s website.

Sohi cited the recently announced Pearson Terminal Hub as an example of a project that the Infrastructure Bank could provide funding for, without reliance solely on the government. Now, despite the rosy predictions coming from Sohi on tools such as the Infrastructure Bank and the announced amount of funding and projects commenced, we recently learned that there would be some projects being delayed, which Sohi said the government’s plan to move funding to later years has more to do with cash flow management than it does with the state of infrastructure work. “We’re the last ones to pay out because that’s how the system works,” Sohi said. “If you visit various communities where these projects are being funded, you can actually see the work being done.”

The mayor also mentioned how the restoration of the long form census was crucial in providing updated and accurate data on the demographic changes in Brampton in order to provide justification for the infrastructure needs of Canada’s ninth largest city. Jeffrey was also impressed by the new federal-municipal relationship; when she was a provincial municipal affairs minister, she said she couldn’t get any of federal Conservative minister to meet with her.

Since the new Trudeau government took office, the federal government has announced funding for all day, two-way GO service and the Prime Minister has come to Brampton at least four times (the most recent was this past week at the Gore Meadows Library to make an announcement about the Canada Child Benefit). Jeffrey said in one of his recent visits, she spoke with Trudeau about Brampton’s Riverwalk Project and an Environmental Assessment is scheduled to begin in 2018.

Mayor Bonnie Crombie’s remarks about Mississauga’s infrastructure needs touched more on familiar topics that the Mississauga mayor frequently talks about in various speeches to community groups and as recently at her State of the City speech. She spoke about the challenges of a young city like Mississauga maintaining and upgrading existing infrastructure at the same time as building new projects, and making sure there is the adequate transit and affordable housing for a ‘complete city.’

Crombie talked about the redevelopment at Lakeview, the West Village in south end Mississauga, the Hurontario LRT (while citing how the growth in housing is causing concerns that people are being priced out of that area). The downtown of Mississauga will see some 22 towers breaking ground in the next fiv years, such as the M City development from Rogers, and that’s happening because of the LRT. She also brought up the Dundas Connects corridor project providing BRT access to the Kipling subway station. Overall, the Mississauga mayor’s themes were that a young and mature Mississauga was providing leadership on investments in infrastructure and building the city.

The panel then moved onto the topic of changes in both Mississauga and Brampton. Mayor Crombie touched on how 40 years ago, the land they were sitting on was occupied by cows and farm fields. While beautiful suburbs were built out, they were not the most efficient way of building. Crombie said all the current projects are the city’s way of retroactively rebuilding the suburbs through intensification.

Mayor Jeffrey touted how the young Brampton is, the average median age in Brampton being 35, and how traditionally Brampton has been known as ‘a sleeping city’ where people go home to sleep every night. But because of all the residential development, there was a lack of transit and health care services in Brampton. The mayor said now the policy when it comes to commercial/industrial land is to keep it that way and not rezone it for residential purposes, thereby expanding the tax base. Both mayors were confident about the human capital in both cities, citing how their professional and educated workforces were an asset when it comes to putting together economic bids such as the one they made for Amazon.

On the issue of climate change, Minister Sohi said people needed the right to access housing, but that housing should be built with climate change in mind (such as more green infrastructure). Sohi mentioned how a long term approach, the use of data and technology should be applied when it comes to determining infrastructure that can help mitigate climate change. Jeffrey talked about how the provincial government’s urging of asset management plans for municipalities is a good way for cities to manage climate problems…not to mention how doing so saves money.

On issues of social infrastructure and affordable housing, Sohi said that if people do not have a decent and safe place to live, they cannot participate in the economy or the fabric of Canadian life. Piggybacking on that idea, Mayor Jeffrey referred to how one of the first issues brought to her attention was a lack of shelter beds for homeless youth in Brampton; if you don’t have a place to settle down, it’s pretty hard for a young person to focus on an education. Mayor Crombie talked a bit about Mississauga’s “Making Room for the Middle” that is supposed to help address the group of people who need affordable housing that don’t qualify under existing programs.

The mayors and Minister Sohi then took some questions from the audience. The first one was from Jeannette Chau from the Professional Engineers of Ontario. Chau asked how cities like Mississauga and Brampton get noticed by the federal government for the share of infrastructure dollars in the face of larger cities like Toronto, Montreal and Vancouver also having the same demands. Sohi replied that the vast majority of the $180 billion dedicated to municipal infrastructure, for something like transit, funding will be based on current ridership. He is also working to hammer out a bilateral agreement with the provinces to provide a fair funding allocation formula. Finally, Sohi said the federal government is also working with the Federation of Canadian Municipalities to provide their members support in asset management plans to help them prioritize what they need in their communities.

Mississauga Ward 6 Councillor Ron Starr asked Sohi about how to deal with congestion and getting people to change their mindset from buying cars to taking transit. Starr brought up how he read the TSX was reporting record car sales and how in a recent planning meeting people were upset at how the removal of two lanes for the LRT would cause more gridlock, referencing how these people’s minds were still on their cars, and that how Starr himself got stuck in traffic for two hours from his city hall office to northwest Mississauga for a meeting, a trip that usually only takes 25 minutes.

Sohi replied that the federal government set aside a $29 billion transportation fund and the Infrastructure Bank will help provide extended funding. The minister also said that a lack of predictable funding and timelines led to ad hoc transit planning that didn’t go anywhere. He said his government would commit to a 10 year time frame in terms of planning, and that they would also look into increasing the cost sharing formula so that the federal government’s share would go from 10 per cent to 40, or even 50 per cent.

Understanding infrastructure needs, how they can be funded and why it is important, in growing cities like Mississauga and Brampton is pretty important at this critical juncture when all three levels of government are aligned in the mindset that the time for building is now. But the minister coming here to discuss and get ideas from the local community is a sign that the cities are really leading the drive for infrastructure investments and moving forward.