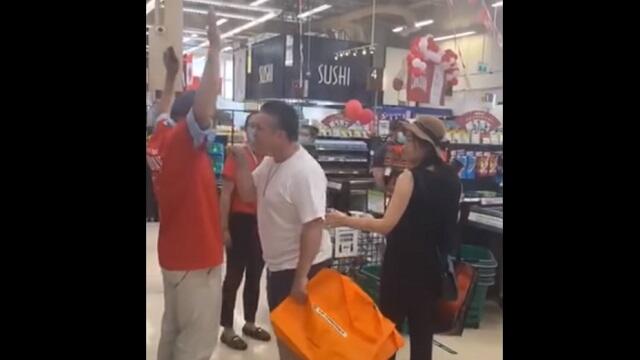 Prime Minister Justin Trudeau has spoken out about a racist tirade that was caught on camera at a Chinese supermarket in Mississauga.

“This is hard to watch. I’d like to echo what [Minister] Mary [Ng] said and thank the employees who took a stand against ignorance and hatred. We all have a responsibility to call out racism and discrimination–so call it out whenever and wherever you see it,” Trudeau wrote on Twitter on July 10.

Trudeau is responding to a video, which was recently posted to social media, that shows T&T supermarket workers asking an irate, unmasked male to leave the 715 Central Parkway West grocery store for refusing to comply with the brand’s well-known mask policy.

When the man was asked to either wear a mask or leave the supermarket, he dumped his items on the ground and began ranting, calling the workers communists, not Canadian, and blaming the coronavirus on the Chinese government.

At one point in the video, an employee defended himself by saying “I am Canadian.”

The man also purported that he couldn’t wear a mask due to his asthma.

“If I wear a mask, I will have an asthma attack. And these communists are all attacking us — attacked my wife, this man pushed me,” the man announced to the rest of the store. “So you’re going to be in trouble. I’m gonna have the police right here at the door.”

While the situation briefly looked like it would escalate to violence, the workers eventually succeeded in getting the man to leave.

Both Mississauga Mayor Bonnie Crombie and T&T CEO Tina Lee have spoken out about the incident.

In a statement, Lee said that there are options for shoppers who cannot wear masks for medical reasons.

In a tweet, Ng, the Minister of Small Business, Export Promotion and International Trade, said that the video might make Asian-Canadians fearful of possible tense interactions.

“‘I am Canadian.’ A powerful response to this hateful interaction at a T&T Supermarket in Mississauga,” Ng wrote.

“Chinese and Asian Canadians, especially young people, who watch this video may be filled with anger, fear, and sadness.”

A Peel Regional Police spokesperson confirmed that officers are investigating the incident and have identified the individual involved in the altercation.

Police are asking the man to turn himself in.