Impressions on All Candidates Debates During Provincial Election in Mississauga

Numerous election candidates have been door knocking for votes leading up to the June 7 election. But as direct as these face-to-face encounters are, the messaging around them is more controlled; you tend to obviously get only the positive side of things upon asking candidates how their campaigns are going.

You would rarely see open dejection; otherwise how would you motivate your own supporters to go out and face the public day after day?

The other aspect is that going up to doors generally yields the response “I haven’t made up my mind yet”, trust me, I’ve done this before and I’ve heard that line a million times. Hence, there is some value in ‘all candidates debates’, which serve as a chance for people to see the candidates discuss the issues before making up their minds.

With the absence of organized all candidates debates since Rogers TV left Mississauga, it was left to local associations, as well as Mississauga city staff themselves, to put something together. I recently took the opportunity to attend two debate formatted events held and here are my impressions of each.

The first was organized by a group called the Peel Chinese Community Services Hub, and they invited candidates from the four ‘main’ parties (Liberals, PCs, Greens and NDP) to attend. Organizer Josephine Bau presented a ‘wish list’ the PCCSH had on issues pertaining to the Chinese community in Mississauga. 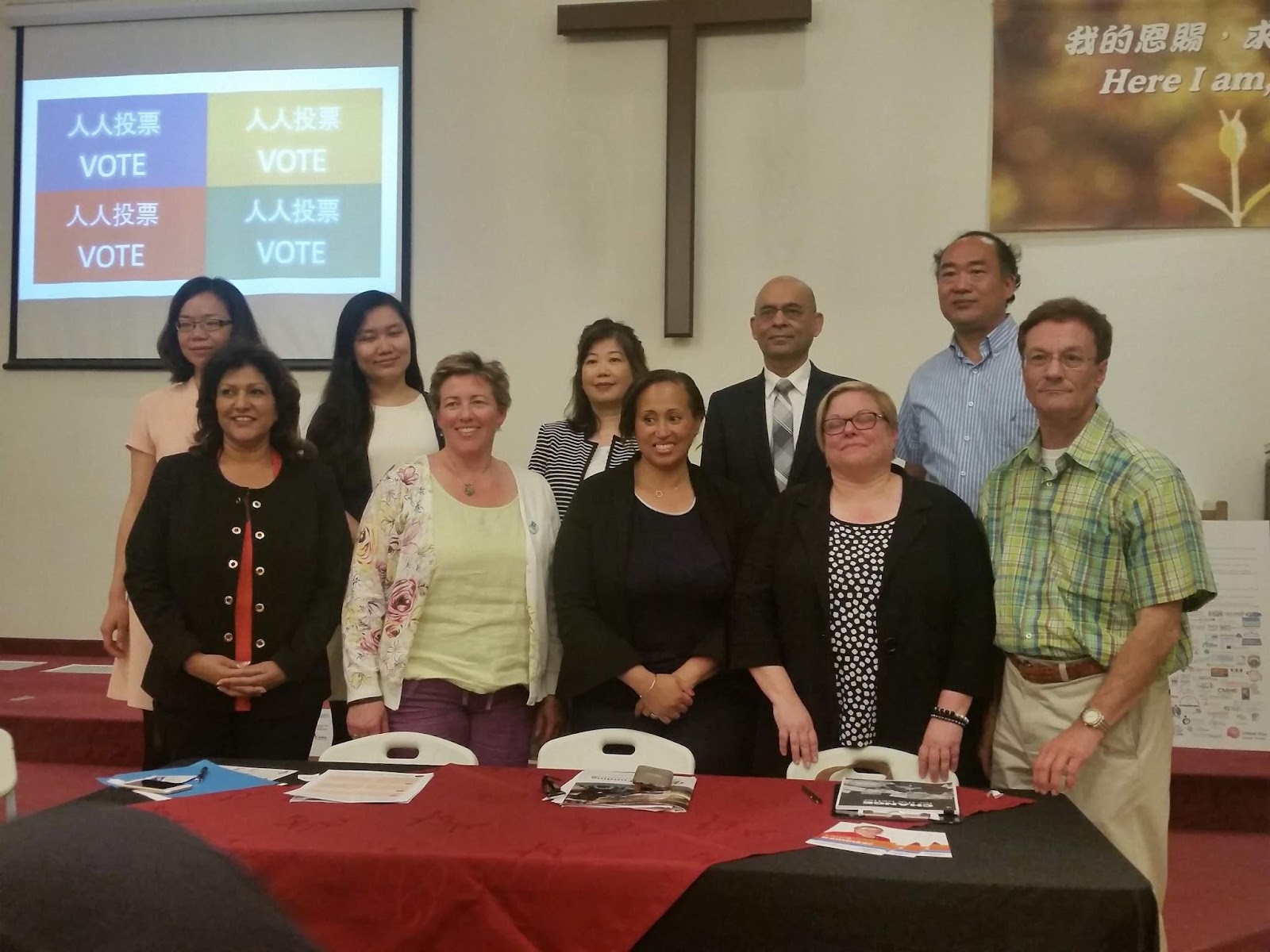 Two issues that stood out from the ‘wish list’ was a request for more mental health services delivered in Mandarin and asking for Bill 79 to be passed, because all legislation “died” when the election was called. The bill asks for the declaration of December 13 every year as Nanjing Massacre Commemorative Day.

For more about this historical event in Chinese history, you can read this previous article delving into the subject.

All the candidates that spoke from each party were supportive of these requests. Either they said they would have no objection to passing the Nanjing Massacre bill or would reintroduce the bill. Liberal candidate Bob Delaney even had his own volunteer translate his words into Mandarin for the audience.

On the city’s end, they’ve organized an initiative called “Mississauga Matters”, around the issues Mississauga is working on such as transit, affordable housing, and infrastructure. There was an information session for candidates, followed by an all candidates debate held on May 22 in Mississauga council chambers.

The information session (see above photo) was basically the city manager making a presentation to candidates on the city’s priorities, and as such the candidates themselves did not need to attend. Their time would have been better used for door knocking while they sent a representative to gather information.

Still, there was one PC candidate (Nina Tangri from Mississauga Streetsville) who showed up, and three NDP candidates (Boris Rosolak, Laura Kaminder and Nikki Clarke). For the NDP, I guess when you face little chance of winning seats in Mississauga, you might as well go to any public forum where people can hear what you have to say.

Although Clarke may have a chance in her Mississauga Malton riding, if the province wide NDP poll numbers keep climbing higher.

The real battle was the May 22 debate, streamed live on Facebook and presented in a similar format as previous debates broadcasted by Rogers. A MPP candidate from the Liberals, PCs, NDP and Greens were present to represent their respective parties. But unlike the city-run information session, the debate was well attended, although a good chunk of the audience were dedicated volunteers of either the Liberals or Conservatives.

In terms of actual concrete policy that stood out, Green Party candidate Abhijeet Manay gave the most coherent answer on how to pay for future public transit: congestion pricing. NDP candidate Clarke repeated her party’s promise to restore 50 per cent of capital costs and operational funding for public transit, which used to be the provincial funding formula way back in the 1970s.

But the real fireworks came between the Liberal and PC candidates, Charles Sousa and Nina Tangri, respectively. My sense is because they’re not running directly against each other, and may not see each other again for another four years after the election depending on the outcome, they felt less restrained towards playing nice with each other, and came with the gloves off.

“You have basically demoralized health care workers,” Tangri retorted at Sousa, bringing up the Finance Minister’s “eye candy” comment back in March. In response, Sousa dug up a lost of revisionist history, citing the chaos over hydro when the Tories were last in power over 15 years ago, and saying there is no clue as to what the PCs will cut, because they have yet to release a platform.

The PC candidate repeated Ford’s promise to lower gas prices by 10 per cent, which Sousa said would mean taking billions away for municipalities to pay for building infrastructure. He also recited how his government uploaded $4 billion services back to the provincial level, easing pressures on municipal finances.

And although the moderator advised the audience to hold their applause, there were several instances of that happening, mainly after the Sousa and Tangri exchanges. One debate watcher summed up Tangri’s exchanges in a rather interesting way: 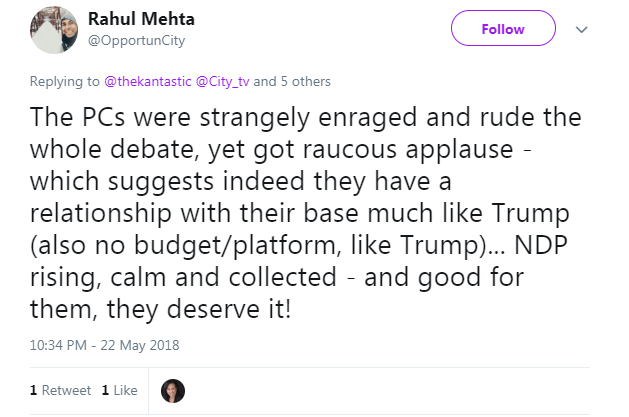 He neglected to mention that the Liberals had enough supporters in the audience to provide the same “raucous applause” as the Conservatives, so it’s not necessarily a Trump-like phenomenon to pack debate audiences with your people; it’s a rather common campaign strategy.

Literally all the rebuttal portions of the debate consisted of Sousa and Tangri going at it, while Manay and Clarke quietly watched on the side. One would have expected Sousa to go after the NDP candidate a bit more aggressively given the poll numbers, but it seemed he stuck with familiar attack points aimed at Tories.

Although Sousa did, at one point, bring up how the NDP platform had “forgotten” about $1.4 billion (because of an admitted accounting error), saying that’s the same amount that funds the Hurontario LRT.

In the end, with all the talking points and political jabs candidates throw at each other, one cannot be faulted for thinking they are all terrible and confusing you as the voter even more. But hey, at least it was mildly entertaining.

You can see the Mississauga Matters debate here in its entirety:

Hugely popular dessert restaurant coming to Heartland Town Centre in Mississauga
While most people are hyper-focused on the coronavirus spread and the severe impact it's having on life around the world, there are actually a few things to look forward to (and that we should look
END_OF_DOCUMENT_TOKEN_TO_BE_REPLACED