Mississauga Backtracks on its Own Policy to Commemorate Massacre

A simple mistake by city staffers has led to the City of Mississauga, city councillors and Mayor Bonnie Crombie offering an apology to a vibrant and key segment of the city's population. On top of that, the city had to violate one of their own regulations to do so.

Mississauga has a one year Community Recognition pilot program. As their website explains, the purpose is to provide opportunities to recognize and celebrate special occasions and events which foster a spirit of community, celebrate Mississauga's diverse cultures and contribute to enriching the quality of life in Mississauga.

The two types of recognition are either a flag raising or lighting up the clock tower on the Mississauga Civic Centre. In order to get such recognition approved, one must meet the following: 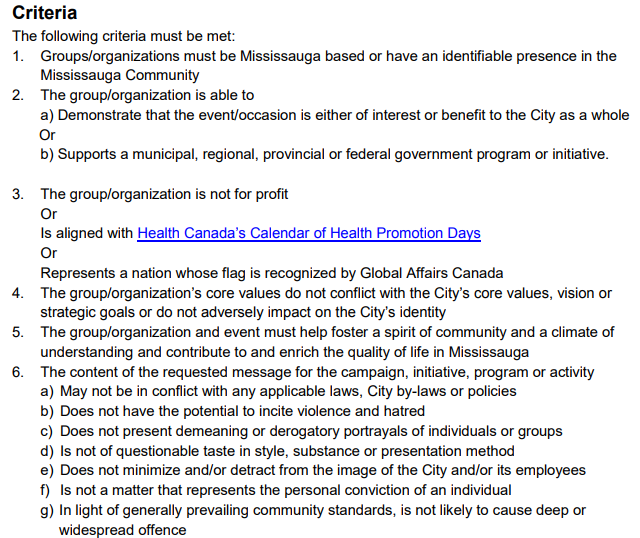 According to Gary Kent, the city's Commissioner of Corporate Services, such events would include "Human Values Day," "Eating Disorders Month," World Health Day, Mental Health Day, and Hazel McCallion Day. Basically, anything that brings people together.

You would think such a policy wouldn't generate any news, but last month local resident Josephine Bau asked for permission to light up the clock tower to commemorate the 80th anniversary of the Nanjing Massacre. Queen's Park has designated December 13 as Nanjing Massacre Commemorative Day, and while the commemoration took place in downtown Toronto this past week, Bau had approached the city for some kind of recognition since the province, the Region of Peel, Markham and Toronto also held commemoration events.

The Nanjing Massacre occurred on December 13, 1937 in the lead up to the Second World War. During their conquest over China, the Imperial Japanese Army entered the city of Nanjing and proceeded to murder and rape upwards of 300,000 people within a six-week period. Victims included women, children and elderly people. 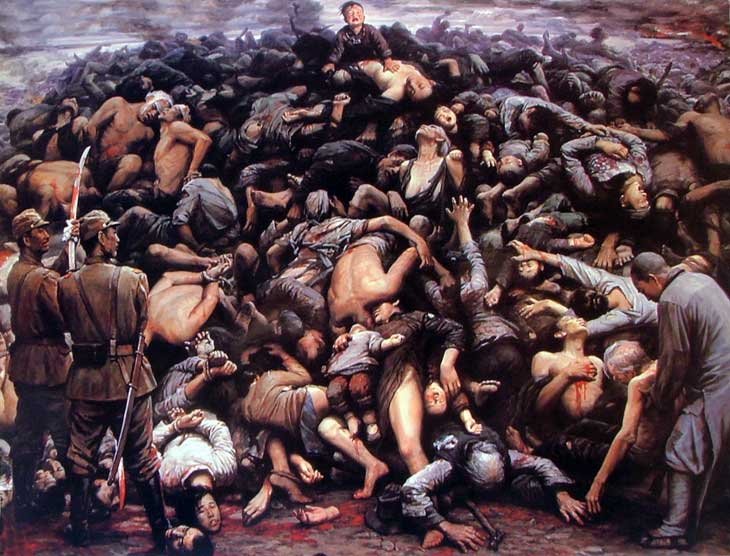 For the Chinese community, Nanjing is akin to remembering the Holocaust, the Armenian Genocide, the Holodomor massacre for Ukrainian Canadians, or the Komagata Maru incident for Sikhs. Since 2015, the event has been recognized as documented heritage under the United Nations' UNESCO Memory of the World Registrar, but the massacre today remains a point of contention in Sino-Japanese relations.

Bau, representing the Alliance of Western Ontario Chinese Organization, and Dr. Andrew Lee came before council last week and requested that the city hall clock tower be lit blue in remembrance of the massacre. She believed the lighting would enhance the cultural diversity of Mississauga by helping people learn that wars are not to be taken lightly, and that it was important that the city uphold the values of justice and peace.

But there was a problem. Bau recalled how back in late November she actually got the approval from the city, only for that approval to be rescinded on December 6 once the city's upper management reviewed the application and found that it did not meet the criteria of the community recognition program. Commissioner Kent now says that proper procedures are in place to avoid a repeat of this kind of incident. 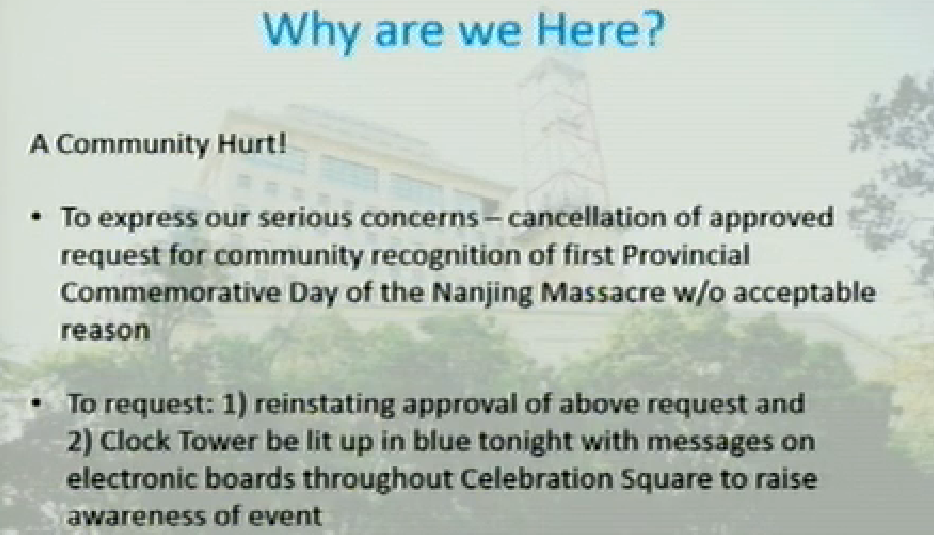 But that didn't sit well with Bau, who brought along Dr. Lee and a sizable contingent of the Chinese community to pack Mississauga council chambers during the meeting, as well as camera crews from two ethnic media outlets to record their presentation.

Dr. Lee's remarks alleged this was more than a simple staff oversight. Lee claimed he was told the Japanese government had paid certain Canadian universities not to endorse actions to recognize the Nanjing massacre, even to deny and distort historical facts. Lee was hoping Mississauga councillors would vote with their heart, allow the lighting, and not be "influenced by a foreign government."

The members of council who spoke, while expressing sympathy and profusely apologizing on behalf of the city's mistake, were somewhat split over wanting to make amends and following the set rules in place.

Mayor Bonnie Crombie suggested that the community should host a vigil to commemorate the event, such as the one held in the aftermath of the Paris attacks in 2015. But it should be noted that the city actually lit up the Civic Centre (albeit not the clock tower itself) with an image of the Eiffel Tower showing solidarity with Parisians, although this was done prior to the implementation of the community recognition program. 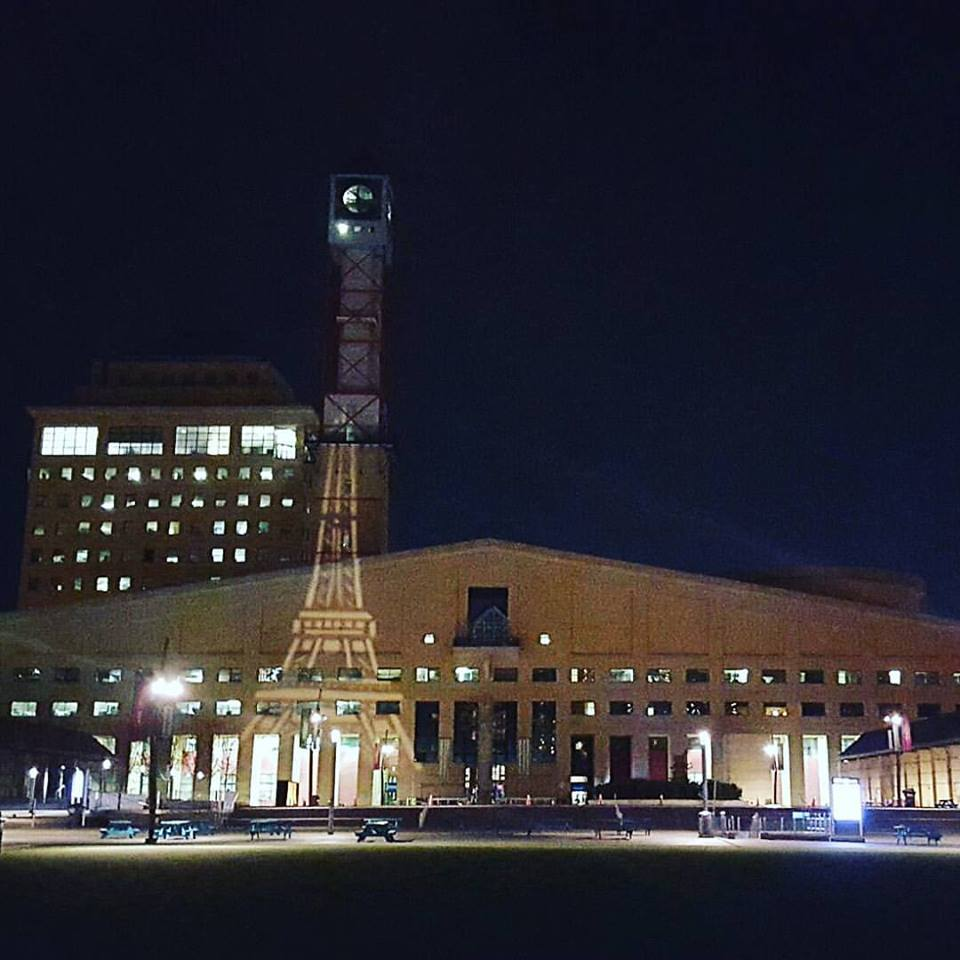 "It is a very sad day when we have to rescind a direction that we gave to a very responsible part of our population," Ward 6 Councillor Ron Starr quipped, who moved a motion to reinstate the original approval for this one time since the city made the mistake.

Following policy to the letter doesn't always work every time, and Starr said he would have been more flexible and approved the lighting. Starr also said that we shouldn't be stuck in a bubble and not knowing what goes outside around the world.

But Ward 9 Councillor Pat Saito was afraid of the precedent being set. "You've allowed this, well now you have to allow this, or this," Saito remarked about how other groups may come forward making the same request. She said the tower lighting was very specific, for organizations that wanted to recognize special months for highlighting events, not commemorating things of a political nature.

These sentiments were echoed by Ward 7 Councillor Nando Iannicca, who said you'll be opening up cans of worms when you recognize one historical incident over another.

"It's just the nature of the world we live in," he said, wondering if Japanese expats will come forward next and wanting their own recognition and revisitation of the facts.

Iannicca said when he envisioned Celebration Square, it was a place to bring people together. The councillor wondered what he should tell people when they come to the Square to skate and see constant events addressing some egregious wrong of past history.

Ward 5 Councillor Carolyn Parrish agreed with giving the one time recognition as an apology to the community because of the staff oversight, but stressed to Bau and Dr. Lee this was not going to happen again.

"Don't come back next year asking again, because the policy isn't going to change," Parrish said. The councillor did suggest, like the Mayor said, that they can hold an event on the Square, or come before council with a motion marking the anniversary of the massacre.

Mississauga councillors ended up approving Starr's motion to light the clock tower this one time for the Nanjing Massacre. But all these comments from our elected officials saying how Celebration Square is a "meeting place to bring the community together" and not for highlighting controversial matters is, in my humble opinion, not quite accurate.

A few years ago, I attended a Vietnamese ‘Thank You Canada’ community event held at Celebration Square, in commemoration of the Vietnamese people arriving in Canada, but there was a movement when some old grievances resurfaced. That was evident when a number of people starting marching around the Square chanting "Down with the Communist government!" If that doesn't sound like bringing over some political grievances, I don't know what is.

Celebration Square has also hosted events for Peel Pride, but let's not forget that it was only some 20 years ago when same sex marriage was a divisive political issue, and to this day there are still pockets of society that are not accepting of LGBTQ communities.

It seems strange to become nervous over recognizing something that happened 80 years ago.

Finally, political protests do happen on Celebration Square; you just have to be around to notice them. I've seen striking library workers picketing outside city hall. I even remember that there were four random people picketing outside city hall during the final years of Hazel McCallion's tenure, over the alleged conflict of interest controversies surrounding her involvement with her son's real estate business dealings.

Now those four people are most likely cranks, but these examples show that Celebration Square and Mississauga City Hall is not always a gathering place to bring the community together. It is also a place that people are increasingly using to bring forward contentious, somewhat divisive political issues. What Ms. Bau and Dr. Lee are asking for frankly pales in comparison to other 'divisive issues' around our city region and beyond Canada's borders.

Toronto's Nathan Phillips Square is the site of many political protests and gatherings. If we're going to accept Mississauga becoming a big city, we are going to have to get used to the idea of our public square as a place where political issues get played out.