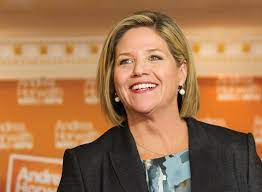 Ontario NDP Leader Andrea Horwath visited Ajax today to announce her government would add Carruthers Creek to the Greenbelt if elected in 2022.

Horwath appeared alongside Durham Oshawa MPP Jennifer French, Ajax Councillor Joanne Dies and local activists for the announcement, saying she was in Ajax “to say something really clearly, and that is the Carruthers Creek headwaters should not be paved.”

She said if they were allowed to be paved over flood risks would increase. “The science is clear. We will see Durham families repeatedly hit by flooding incidents.”

She cited a report that showed areas of Ajax could see a 113 per cent increase in flooding if the headwaters are developed, an assertion backed up by the Carruthers Creek Watershed Plan.

While much of the Creek is protected by Oak Ridges Moraine protection legislation, the headwaters are not.

She claimed previous Liberal government had promised to protect the creek, but did not do so in their nearly 15 years in power. Rod Phillips, Ajax’s MPP and former Finance Minister who recently returned to the Ontario cabinet, supported protections during his campaign but has also not followed through.

However, the Ontario government has expanded Greenbelt protections to Clarington green space in September. Premier Doug Ford got himself in hot water during his campaign when he promised developers he’d open “a big chunk” of the Greenbelt to them, a position he later reversed.

The next Ontario election is scheduled for June 2022.