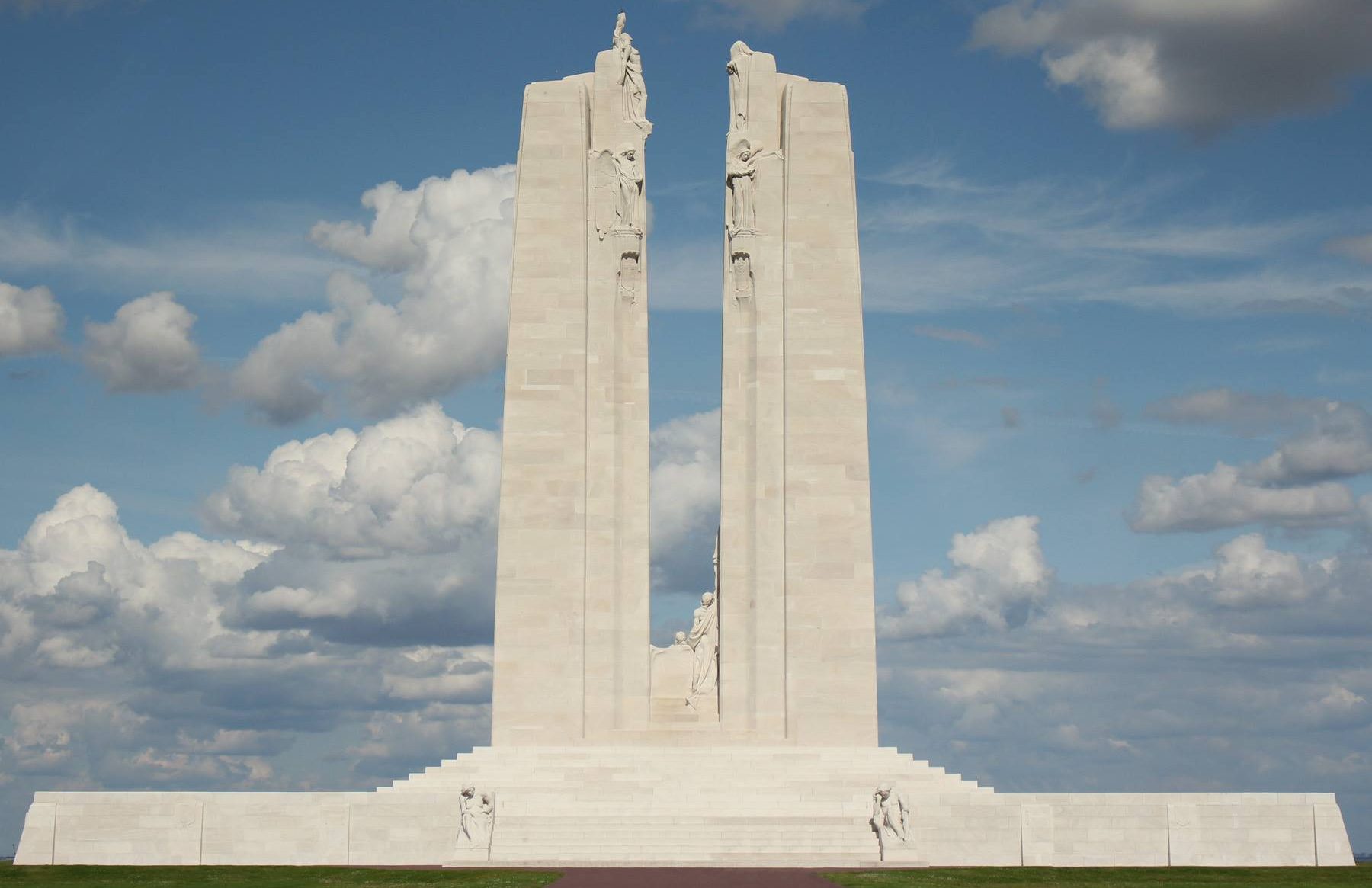 The Vimy Ridge Memorial in France. - via Veterans Canada

Wearing the tie of the Ontario Regiment, Whitby MPP Lorne Coe stood in Queen’s Park today to tell the tale of the Canadian Forces’ capture of Vimy Ridge in the first battle uniting the four divisions of the Canadian Corps and cementing Canada’s national identity.

“On a cold Easter Monday in France thousands of Canadians fought together to attain one of the First World War’s most memorable victories,” said Coe.

With an unobstructed view of many kilometres around Vimy Ridge and the defensible incline, made dislodging the Germans a herculean task.

The French Tenth Army tried and failed in May 1915. The following September, French forces were rebuffed again. In between the 1st Moroccan Division briefly took the ridge, but were also routed when reinforcements failed to arrive.

In their attempts to reclaim Vimy Ridge, the French lost 150,000 fighting men. The conflict calmed as the warring factions had attentions divided and a “live and let live” approach held until 1916.

In the interim, German forces built a network of underground tunnels through the ridge burrowing into the very landscape. They would tunnel under French trenches and bomb their rivals from beneath.

Allied Britain sent in specialist tunnelling companies in attempt to smoke out the German underground tactics in May 1916. The British were forced to withdraw amid heavy shelling from secret artillery hidden behind the ridge. The Germans seized the British tunnels and dug in even deeper.

In October the Canadians relieved the British of their guard, under the command of Lieutenant-General Julian Byng. The Canadians watched the ridge until March 1917, when orders came down to take Vimy Ridge.

All four Canadian Divisions, after spending the war spread throughout France, would unite for the first time to take the ridge. Even together the Corp lacked the necessary resources and a British division came in to swell the Canadian ranks.

Together the Corp came up to 170,000 men of whom more than 97,000 were Canadian, nearly 60 per cent of the total force. “They were francophones, anglophones, new Canadians, Black Canadians, and Indigenous peoples,” Coe described.

“Many of them were young men in their late teens and early twenties, homesick and exhausted,” he said, “But brave and united in their fight for peace, freedom and justice.”

The strategy the Canadians used would was based on the French victory in the Battle of Verdun, a nearly a year-long of fight which raged from February 21 to December 18, 1916 and would be the longest battle of the First World War.

In Verdun, French forces ultimately bombarded the German lines with artillery fire as two waves of soldiers attacked. Canadian Generals, including Arthur Currie, were briefed on this strategy and developed the “Creeping Barrage” on the French technique.

Organized into several lines, the Canadian Corp would “leapfrog” over one another. One line would charge to a set line, based on the topography of the Ridge. There they would hold and be supplanted by another unit which would rush to the next such line.

The strategy called for four lines and four such leapfrogs to maintain the attack’s momentum and leave little time for German to exit their extensive tunnels. Canadian forces would advance right behind the raining barrage, requiring pinpoint precision achieved after months of training maneuvers.

“After careful training and preparing their attack, they climbed from their trenches and stormed Vimy Ridge, an enemy fortress many thought could never be taken,” described Coe.

Bruising the German lines with bombardments for weeks, Canadian artillery cleared a path through barbed wire, intentionally underselling their firepower by using only half their guns.

The Canadians crested the trenches at 5:30 a.m. April 9, Easter Monday, greeted by an incoming snow storm that would slick the Ridge with sleet. Uncomfortable but advantageous the storm blew uphill into the face of the German defenders.

“Members of all four divisions of the Canadian Corp battled uphill through a landscape scarred by years of conflict,” said Coe “Fighting side-by-side for the first time.”

Double the previously seen firepower rained on German lines, advancing 90 m every three minutes, as the Canadians made swift work up the Ridge, capturing the first of four target lines by 6:25 a.m. The final objective, the Red Line, was reached shortly after 7 a.m.

While the first, second and third divisions made it to their objectives, the fourth was massacred as they went over the top. German machine gun nest laid into the fourth division’s right flank, killing and wounding numerous men.

With the losses in the fourth division, the Canadian left flank was exposed and the Germans mounted a counter attack that evening. They were able to recapture the ruined village of Vimy from Canadian occupation, but failed to recapture the Blue Line objective.

The next morning, reinforced by British troops, the Canadians resumed their leapfrog tactics to retake Vimy around 9:30 a.m. By the evening of April 10, the four Canadian divisions had reached all of their strategic goals, save “The Pimple,” the highest point of the ridge and a heavily fortified German base.

The Pimple was the German force’s primary defensive base in the battle from which they defended their entrenched positions by raining fire on the Canadians. This elaborately defended position was responsible for many of the Canadian losses.

Fighting resumed April 12 with a Canadian raid on the Pimple. The beleaguered Germans, despite temporarily driving the Canadians back with small arms fire, left large gaps in their defense which were swiftly exploited.

The Canadians controlled the entirety of Vimy Ridge by 6 p.m.

“Over the course of four days through mud, shelling and gunfire they captured the entire ridge,” Coe continued, “achieving what no Allied army had done.”

All told the Canadian Corp lost 3,598 men and another 7,004 were wounded. German losses were at first unclear, but later counted at around 20,000 casualties and 4,000 captured.  The Germans never tried to retake Vimy Ridge, instead scorching French earth in their withdrawal from the region.

After the battle Byng was promoted to command of the British Third Army. When the war ended, he was raised to the peerage and dubbed the first Viscount Byng of Vimy. He would go on to serve as Canada’s twelfth Governor General from 1921 to 1926 in a tenure that saw major reforms to the role after the constitution crisis known as the King-Byng Affair.

Arthur Currie, who largely masterminded the assault, was raised to complete command of the Canadian Corps for the duration of the conflict. Currie began the war at the bottom of the ranks as a gunner and ended it as the highest ranked Canadian. He was later knighted and his held as among Canada’s great military tacticians. A 2004 CBC poll ranked him as the 24th Greatest Canadian.

The battle came to symbolize the birth of a Canadian identity independent of Britain as the first instance of all Canadian forces working together.

“The Battle of Vimy Ridge was an important chapter in a great war and an important chapter of our country’s history, Coe concurred. “What they accomplished was more than a remarkable military feat. With courage, determination and grit, they taught us that ordinary people can achieve extraordinary things and in so doing helped define Canada as a country.”

On the Canadian losses Coe said, “Their sacrifice transcends dying. It reminds us of the immense debt of gratitude we owe all Canadians in uniform.”

“Lest we forget,” Coe concluded.