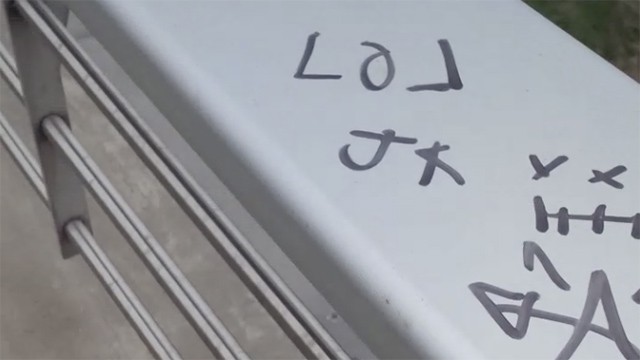 A Mississauga woman is outraged and asking both the City of Mississauga and police to investigate after discovering offensive graffiti on a busy overpass in the city.

In a video sent to insauga.com, resident Jennifer Neyra shows a series of words written along the guardrail on the Confederation Parkway bridge overlooking the 403.

The graffiti begins with a black arrow urging people to walk further and ends with instructions on where to jump off the overpass.

In the video, Neyra says she worries about the impact the words could have on people struggling with depression.

As Neyra walks down the bridge, she notes that “2nd Try” is written on the guardrail.

“It breaks my heart to see that people would actually do this because…you’re pushing them.”

As the bridge ends, writing appears that says “Last chance.”

“I want people to know that there’s a lot of people out there that want to help others,” she says, before adding that the word “pussy” appears later on the guardrail, prior to writing that says “lol jk (just kidding).”

“Stuff like this is not a joke,” she says.

Troublesome graffiti has become a common topic of conversation in Mississauga. Recently, Mississauga City Councillor Sue McFadden offered a $500 reward to anyone who could help police find the people responsible for “vulgar” and anti-semitic graffiti in a residential neighbourhood.

In March, two teens were charged after “derogatory and offensive” graffiti was discovered near Iona Secondary School.

Neyra says she reported the bridge graffiti to the city.

Anyone who sees graffiti is asked to report it to Peel police by calling the non-emergency phone number (905-453-3311) or submitting an online report.

Graffiti can also be reported to the City of Mississauga by calling 3-1-1.