If you were today-years-old when you learned that the Canadian Pizza Summit is a thing, you’re not alone. But I suppose it makes sense that the world’s greatest food has a summit to itself.

If the discovery of a pizza summit wasn’t good news enough, Hamilton is officially home to some of the best pizza in the entire country.

As a reward, Madadi gets a free trip to the Vegas Pizza Expo, which includes flight and hotel.

MaiPai is a Detroit-style pizza restaurant and tiki bar. It’s known for its colourful and truly unique menu of pies.

MaiPai is also a favourite among vegans for its ability to pull off a delicious dairy-free cheese pizza. Plant-based meat has been perfected, but very few have been able to pull off a quality cheese substitute that works on a pizza.

There was another Hamilton-based pizza joint that earned recognition at the Canadian Pizza Summit.

Cowabunga Pizza’s Justin Tanada was awarded Best Photo for his shot of a Spicy Pep slice. 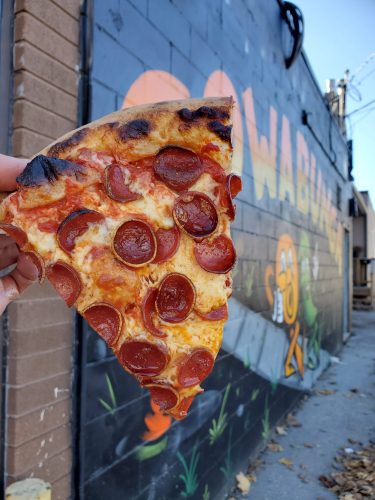 The judges considered the photo’s “composition, originality and intent, clarity and quality, lighting and exposure, colour, and how well it represents the Canadian pizza industry.”

Hamiltonians were well aware that they lived in a hotbed of pizza. The rest of the country has been put on notice.