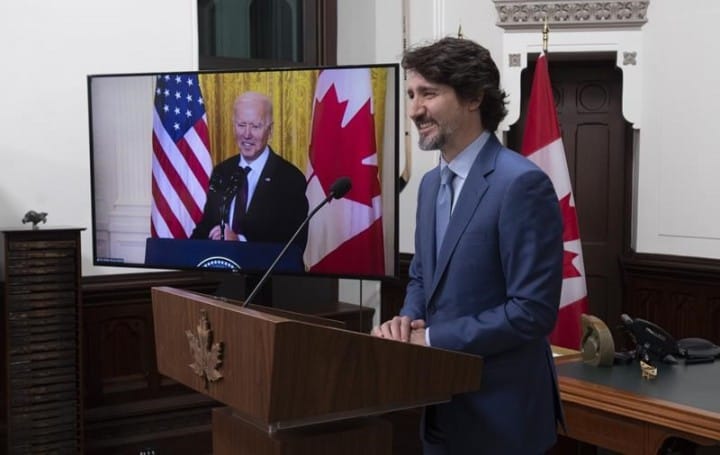 OTTAWA — Prime Minister Justin Trudeau is promising Canada will slash its greenhouse gas emissions by 40 to 45 per cent within the next decade.

The cut applies to 2005 emission levels.

The new target is higher than the 36 per cent reduction the government says it can achieve under existing measures by 2030, and the 30 per cent goal Canada initially agreed to under the Paris Agreement.

Trudeau announced the higher target Thursday (April 22) during a virtual climate summit of world leaders convened by U.S. President Joe Biden, who pledged to cut his country’s emissions by 50 to 52 per cent by 2030.

“If major economies in the room were to follow Canada’s lead and adopt a rising price on pollution and commit to phase out coal plants, we would accelerate our global path for a safe, prosperous net-zero future,” Trudeau said in a short address.

“After more than five years in office, the Trudeau government is still incapable of proposing a target as ambitious as that of Joe Biden, who took office just three months ago,” Keith Stewart, a senior energy strategist with Greenpeace Canada said in a statement Thursday.

He added there was no commitment to transition away from fossil fuels as Canada remains heavily tied to the oil and gas industry.

Ahead of the summit, seven environmental groups released a report with modelling that said to limit global warming to 1.5 C degrees compared to pre-industrial levels, Canada should double the 30 per cent commitment it signed in the Paris Agreement.

Clean Prosperity, a climate policy organization, has said it could see Canada adopt a new target of between 40 to 50 per cent in recognition of the economic challenges around a clean energy transition and people employed in the fossil fuel sector.

“I am concerned that the Liberals will set a target and not meet it, and that’s why we’ve been saying we need better accountability,” Singh said.

In a letter to Liberal Environment and Climate Change Minister Jonathan Wilkinson, Singh called for the government to adopt a 50 per cent goal, while the Greens say it should be 60.

The summit comes as parliamentarians debate Bill C-12 which, if passed, would mean the federal environment minister has to set rolling, five-year targets for cutting carbon emissions starting in 2030 and ending in 2050.

Before Thursday’s event, Wilkinson penned a letter to federal party leaders asking them to say what they want Canada’s new emissions target to be, and underscoring the need for co-operation on “raising our ambition.”

“Time is now running out,” read the letter obtained by The Canadian Press.

“New evidence continues to mount about an accelerating climate crisis, and the transition to a low-carbon economy has become a global sprint as countries compete to attract clean-growth investments and create the good middle class jobs of the 21st century.”