Truck production up and running at GM’s Oshawa assembly plant 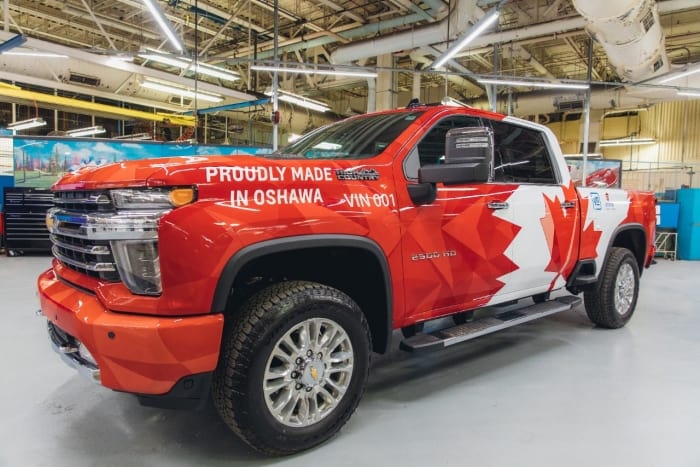 The return of truck production to Oshawa – announced in this space yesterday – provides a significant economic boost for Canada’s automotive sector, creating 1,800 new jobs to support two shifts of production in Oshawa, and supporting thousands of additional jobs in the supplier base in Canada.

General Motors Canada confirmed today that the first Chevrolet Silverado pickup has rolled off the line at the reopened Oshawa Assembly plant after nearly two years of producing nothing more than face masks for the pandemic.

Pickups are GM’s largest and most important market segment across the continent, and the Oshawa plant will help GM meet strong demand for its family of pickup trucks, said GM Canada president and managing director Scott Bell.

“The reopening of Oshawa Assembly is an historic accomplishment for GM Canada and our many community partners who worked together to bring us to this very happy day,” Bell enthused. “The rapid retooling, hiring, and training needed to reach today’s start of production was an extraordinary accomplishment. We continue our work with the federal and Ontario governments toward even larger transformative investments in Canada.”

Durham Region Chair John Henry said he was “thrilled” to see the plant re-open after shutting down in December 2019 for what many though was for good.

“This is not only great news for GM Canada and involved partners, but for all of Durham Region, as the creation of thousands of jobs and boosted economic growth comes at such a crucial time,” Henry said. “The automotive industry has been at the heart of Durham Region’s economy for more than a century … and I can’t wait to see the positive effects that cascade throughout the region as a result.”

Oshawa Mayor Dan Carter agreed. “We’re excited to celebrate the re-start of the Oshawa truck plant that is bringing quality jobs to our great city and building upon Oshawa’s rich automotive history.  Today, we celebrate a bright future for our community and for the automotive sector in Ontario and Canada. We thank GM Canada for believing and investing in Oshawa’s productive, innovative and high-quality workforce.”

Even Premier Doug Ford had something to say on the re-opening. “Today marks an incredible milestone as the first trucks roll off the assembly line here at GM’s reopened assembly plant in Oshawa,” he said. “As we move forward with our plan to build Ontario, we will continue to create the conditions needed for more investment while restoring good manufacturing jobs just like these.”

Unifor president Jerry Dias, who has been given praise for bringing the plant back from the dead while drawing plenty of criticism from union members for not doing enough to restore enough of the old jobs at the old wages, called the re-opening of the plant “unprecedented” in Canadian automotive history.

“It is an achievement owed to the resiliency and dedication of Unifor members. Seeing the first of many trucks roll off the newly re-opened Oshawa assembly line was a proud moment for everyone who fought shoulder to shoulder for these jobs,” he said. “The auto industry has and will continue to be the bedrock of Oshawa and Durham Region’s economy.”

Delivery of trucks to dealers will begin next month,

To continue the plant’s legacy of giving back to the community, GM Canada will raffle one of its first vehicles to our dealers to benefit the Durham Children’s Aid Foundation, continuing the legacy of Sharon Clark, a former employee of Oshawa who lost her battle with cancer in 2020. For more than 50 years, Oshawa Assembly employees have donated holiday gifts for children in need, through ‘Sharon’s Kids.’ Since 2018, GM Canada and our employees have donated more than $500,000 to the program, which is now part of the foundation.

“We are especially pleased,” GM Canada president Bell said, “that the first truck off the line will help GM and our Canadian dealers raise money for Sharon’s Kids, one of our favourite charities in Durham Region.”