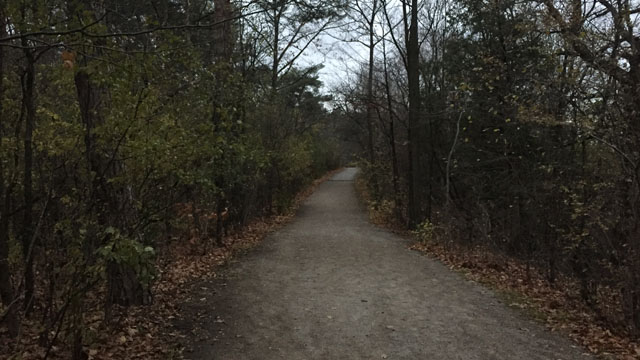 I recently took up running with a small group of friends in Mississauga. We go to various places around the city and run short runs, approximately two km one way and another two km back again. Suffice it to say, nothing clears your head better than sweating out some stress and frustration by running a few hours. You also don’t have to save running for the warmer months–a clear trail (and trails should be snow-free this weekend, considering the mild temperatures) is great for a brisk run on a cool winter’s day (just dress warm).

Mississauga may be a car dependant city, but don’t let that stop you from enjoying a good run now and then. On numerous occasions, I’ve seen running groups gather outside The Running Room next to the Square One Panera Bread during Sunday mornings. And let’s not forget that the city hosts the Mississauga Marathon, a popular and growing event that attracts thousands of participants every year since its inception.

For those of you who are looking to train in between marathons, or just looking for a quiet place to run, here are a few suggestions of unique running trails around Mississauga you can enjoy. Take in mind, most of these suggestions would require you to drive to said location before getting out and running, so I would be providing some parking suggestions as well.

Erindale Park is a well known park in Mississauga west of Mavis along the Dundas Street corridor, across from the historical Erindale Village. This spacious area is frequented by many large family and community groups, who more often than not have large picnics and barbeques. But beyond these particular uses, Erindale Park also contains a decent running trail along the Credit River. It’s part of the Culham Trail network, so you can also access University of Toronto Mississauga from Erindale Park through this trail.

I would say it’s a decent five km run if you start from the park and run along the trail up towards where the river intersects with Burnhamthorpe Road / Highway 403, and back down again. You’re surrounded on either side by a thick forest of trees and the sound of the running water along the Credit, so it’s an idyllic place for running, biking and walking if you’re looking to get away from the daily grind of Mississauga.

Parking is not really a problem; there’s an ample number of spaces available, unless there is some massive event being hosted. If a situation where there’s no parking available should actually manifest, there are some parking spaces across the south of Dundas. Besides the residential side streets (if they allow parking), there are parking lots at Erindale Community Hall or the Piatto restaurant. However, they may not take kindly to people parking there for purposes other than going into their establishments. Best to cross your fingers and hope there’s room at the parking lot inside the park.

The Culham Trail stretches along the Credit River from Erindale Park all the way up to Burnhamthorpe Road. But if you’re not interested in starting a run along the trail all the way from the bottom at Erindale, you can always try the Riverwood Conservancy. This is a beautiful spot in the heart of Mississauga, approximately 60 hectares of land along the Credit River. It definitely counts as a unique place. The area boasts rare lowers, hundred year old trees growing alongside newer ones and a variety of wildlife.

Unlike Erindale Park, Riverwood is not really a large setting for picnics like a traditional park, but it does host a number of unique cultural and arts programs, and it’s more to do with housing gardens. This map shows the route for Culham trail (showing approximately 1.7 kim) that if you run south will lead to Erindale Park and if you go north you will reach an area known as Henwick Meadows.

The parking is decent, and there are residential areas across Burnhamthorpe accessible via The Credit Woodlands that you can use if the lot is full. But I have never been at Riverwood when there was some big event so I have not yet experienced a difficult time whether parking reaches capacity and people would have to go elsewhere.

This is a small park around the northwest corner of Britannia and Creditview Road, just on the periphery of Streetsville. There is a trail that runs from a neighbourhood starting around Kenninghall Blvd and runs all the way down along the Credit River, underneath the Britannia Road overpass which leads to the south side of Britannia. I would say it’s a good 2.5 km one way run, so you can easily squeeze in a 5 km run from one end of the trail and back again.

If you’re looking for a parking spot, you can access it via going north along Creditview and turning left on Kenninghall Blvd then turning into a side street called Pine Cliff Drive. Go all the down until you see the small parking lot and a children’s jungle gym. From there you can run the trail down along the river to the Britannia Road overpass, underneath the bridge, and emerge just outside Streetsville where this type of sign is located.

Port Credit is going to go through some substantially transformative changes in the next few years, but even so it already has existing amenities that will satisfy anyone looking to get some regular exercise along Mississauga’s waterfront.

The Waterfront Trail stretches south of Lakeshore Road through two adjacent parks, St. Lawrence and Tall Oaks. The trail within these two parks can be accessible from the end of Helene St S once you pass Lakeshore and Port Street East, and stretches all the way through Tall Oaks Park where there is an exit leading to the end of Elmwood Avenue South. Alongside the trail is Lake Ontario on one side and sparkling townhomes on the other.

There is another Waterfront Trail just west of St. Lawrence and Tall Oaks but instead of being mostly a straight line, it’s a circular loop around JC Saddington Park. It’s definitely a shorter route around one way, but if you’re looking run a few short rounds then this would be most ideal for you.

Just north of the intersection at Mavis Road and Courtney Park Drive, there is a trail that runs from 2nd Line West to the intersection of Spinnaker Circle and Navigator Drive. But there are also alternative routes that split off into some other residential streets. The area is more commonly known as Fletcher’s Flats, and it’s within the confines of Meadowvale Village. The main running route goes underneath the Mavis underpass, so similar to the Riverrun route underneath when it goes under Britannia Road.

Unfortunately there isn’t really a designated parking area. There’s probably some parking alongside residential streets but always make sure to check that there aren’t any no parking signs. Mississauga By-Law enforcement is said to always be stretched thin so they’re not patrolling every single neighbourhood in Mississauga at all times…but why risk it?

Mississauga’s Parks and Recreation department says there are some 505 parks in Mississauga. Not all of them have decent trails where you can get a good run in, but I’ve given five examples where you can get in some good running. And if there are any that I missed, we would really love to hear from our readers for any other suggestions.