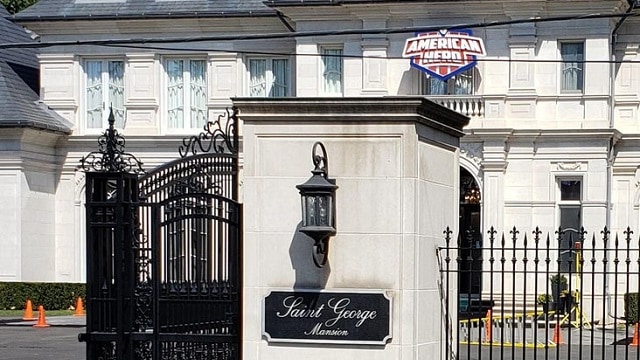 If you haven’t watched Amazon’s The Boys yet, it’s definitely worth checking out — not just because it’s a great show, but it’s also used our city as a backdrop numerous times.

Despite the pandemic, filming for the show’s third season is currently underway. Reddit user consultant999 posted on Thursday about a film crew at the Saint George Manor, the massive $50 million mansion on Doulton Drive off Mississauga Road.

A sign on the manor says “American Hero” — fitting with the show’s American superhero setting.

It’s already been confirmed that the third season is filming in the Toronto area, with camera work expected to wrap up by the end of August this year.

Showrunner Eric Kripke said in January that crews were heading to Toronto to start filming, and Laz Alonso, who plays MM, recently posed for a selfie with the CN tower in view.

On my way to Toronto to film #Season3. I’m smiling under this. It’s all happening. #TheBoys #TheBoysTV @TheBoysTV @PrimeVideo @SPTV #SPNFamily #ToledoPride pic.twitter.com/W25wOa97Gg

Mississauga and the GTA have served as a filming location for The Boys multiple times in the past. Season 1 filmed scenes at the Central Parkway Mall (you can see the washrooms and the theatre box office in the background) and the Streetsville Gas Station at 57 Queen Street North.

In season 2, we saw the underground parking of the Living Arts Centre and East Side Mario’s at Heartland Town Centre.

The Boys features a group of vigilantes known as “The Boys” who are committed to taking down corrupt superheroes who abuse their powers.

With filming set to wrap up later this year, we’re hoping for a season 3 premiere sometime in 2022.