The Story of Murder and Executions at the Old Brampton Jail 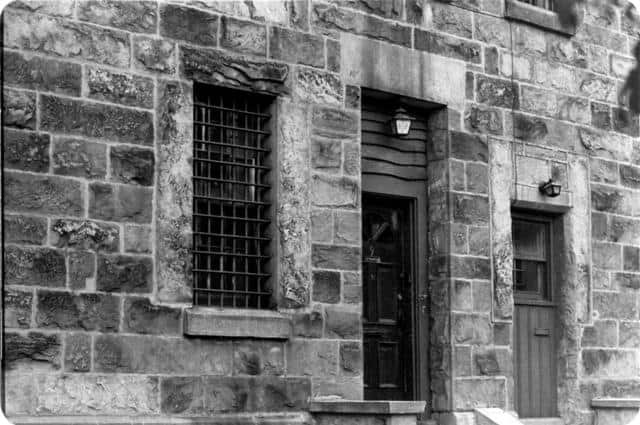 The semi-urban Region of Peel witnessed a hanging in 1909.

The semi-urban Region of Peel witnessed a hanging in 1909. The victim (although that might not be the correct term, depending on your take on capital punishment) was Eastern European migrant worker Stefan Swyryda, a man who never stopped proclaiming his innocence.

The case of Swyryda is an interesting one. Unlike more prolific (and very much alive) convicted Mississauga murderer Peter Demeter, various clippings from the Toronto Daily Star, Globe and Mail and modern-day Brampton-area papers paint the accused as something of a listless sad sack — a perpetually broke, derelict tenant who worked very little.

According to clippings obtained from the Peel Art Gallery Museum and Archives, Swyryda was accused of murdering 17-year-old Austrian boy Oloeck Leutik near Erindale in 1908. The motive? Possibly the dollar that Leutik was carrying in his pocket after selling his accordion to his landlady’s husband.

The sordid tale is hard to sort through, mostly because of some inconsistent reporting. Various newspapers identified Swyryda as Russian, Austrian and Greek Catholic, but he was most commonly classified as Russian. Swyryda had come to Canada by way of Rochester and was living in Ann (sometimes referred to as Anna) Vasilinia’s home as a boarder.

According to clippings, Swyryda took Leutik into his room after reportedly finding him crying on the street, destitute and homeless (there’s a lack of clarity over whether he had been sleeping in a police or train station when Swyryda discovered him). Far away from family and friends, it appears Leutik was happy to be sleep on the floor of Swyryda’s bedroom for two nights. Sadly, the youth’s luck ran out. After briefly lodging with Swyryda and selling his accordion for a dollar, Swyryda told Vasilinia that he was going to help Leutik find a job on a farm. The two disappeared and only Swyryda returned, claiming the teen had secured employment.

A few days later, Leutik’s remains were found in the bushes on David Faskin’s farm near what was then referred to as Clarkson’s Corners (it’s now the modern day intersection of Royal Windsor and Southdown). According to a clipping, three young men discovered the victim of a “foul and bloody murder.” The article goes on to say that Leutik’s left jaw and cheekbone were broken and his ear was smashed, suggesting he was struck with a club. He had a woolen scarf around his neck that he was apparently dragged by, leading investigators to believe he was pulled from the murder site to a more remote area marked by tree stumps and more ample foliage.

The headline for the story is amusingly tone deaf, proclaiming “A Foreigner Murdered in Bush Near Erindale.” Although the use of “foreigner” is jarring, it was indeed an appropriate term at the time. If you’re a Twin Peaks fan, it’s reminiscent of the Asian Man Killed headline that keeps cropping up in the second season.

Aside from being the last person seen with Leutik, other circumstantial evidence linked the troubled migrant to the murder.

After receiving a tip from another migrant, inspectors went to Swyryda’s residence to take him into custody. The evidence against Swyryda was based primarily on eyewitness accounts. The wife of a nearby farmer, Arietta Manly, claimed she saw Swyryda the night of the murder when she was driving along the road with her son.

Vasilinia also presented some damning rhetoric, telling the court that Swyryda gave her a dollar after returning without Leutik — perhaps the very dollar Leutik received from the sale of his accordion. According to a Toronto Daily Star clipping, Vasilinia told the court that Swyryda rarely paid her for his lodgings, but often told her he would when he could afford to. He did, after the murder, send his wife (who joined him shortly after he moved into the home) $5. He told Vasilinia’s husband that he had earned some money for bringing the victim to a farm for work, leading investigators to believe the murder occurred as part of a robbery. When Leutik arrived at Vasilinia’s house, he did have some money (at least enough to pay her for sharing Swyryda’s room), further strengthening the police’s belief that he was killed for his modest savings.

Another eyewitness, a firefighter named Albert Weir, told the court he saw Swyryda washing blood off his body in a culvert the day after the murder. The fireman told the jury that he assumed Swyryda was injured, perhaps “struck by a locomotive or had been in an Italian row and had got the knife.”

After a lengthy trial, the judge sentenced Swyryda to death by hanging for the murder of Leutik. His lawyer, E.G. Morris, asked for a commutation of the death sentence, but was eventually denied.

On Jan 22, 1909, The Globe and Mail reported that the court was going to uphold Swyryda’s sentence. His death by hanging at the Brampton Jail (or the Peel Country Jail) was set to occur as scheduled. Interestingly enough, the Peel County Jail (not a historical site) was infamous itself. Known for its less than stellar conditions, the jail was condemned in the 1980s. Huey Newton, a co-founder of the Black Panthers (a black rights organization) did some time there in 1977 and said the facility was worse than anything he’d seen in Cuba.

On Feb 11, 1909, Swyryda was the first (but not the last) man hanged there. He was hanged at 8 am and was pronounced dead 12 minutes from the time the lever was pulled. He died in front of 12 witnesses, including a priest who, according to a report by the Peel Art Gallery Museum and Archives, became hysterical and needed to be escorted away.

The same documents also say that Swyryda told witnesses that he was not afraid to die and thanked officials for their kindness towards him. He told one man that someday the real murderer would be found and his name would be cleared.

While his name has never been cleared, a Star article from 1996 reported that Swyryda’s body, which remained at the jail until the mid-90s, was reinterred at the Meadowvale Cemetery.