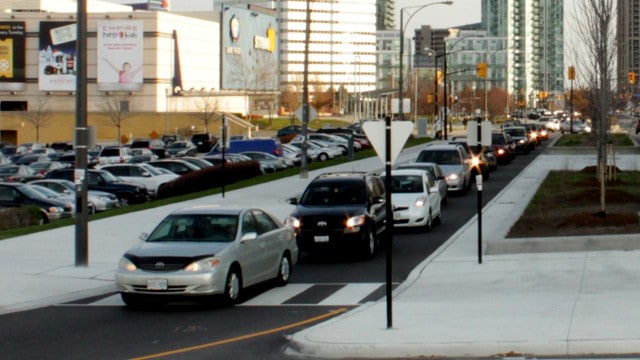 Earlier this month, Mississauga’s long-time and usually beloved mayor greeted members of the GTA press with some unhappy news – the cities outside of Toronto are falling victim to stagnant and unsatisfactory infrastructure, and residents are going to have to pay more to rectify the problem.

Hazel McCallion, upon emerging from a meeting with Premier Dalton McGuinty, said that municipalities must push the provincial government to create a new tax aimed at improving transit. The move is bound to be an unpopular one, and the Mayor admitted as much.

“They don’t want tax increases,” she told reporters at Queen’s Park after the meeting. “But if you don’t want tax increases, you’re not going to get service. It’s as simple as that.” McCallion said the gridlock in the city – and Sauga residents can certainly attest to obscene congestion during rush hour – is unacceptable to both residents and foreign investors whose money can benefit the city’s economy. But while it might be too early to sway residents to join the higher/new tax camp with promises of specific, appealing projects, the idea of paying more for better services has some Sauga natives intrigued.

While it seems almost impossible to argue that the state of Sauga’s roads is perfect or even mostly satisfactory, it’s hard to sell new or higher taxes when residents are reeling from a deep recession and grappling with uncertainty about their – and the world’s —financial future. Having said that, some people think of increased spending as a lucrative investment in a growing city’s future.

“As our community grows, we need to financially support that growth,” adds Smith.

Others, however, are unsure.

“I do not know enough about what kind of tax increases we’re looking at,” says Sharon Hobin, a school trustee who’s lived in the city for 30 years. “I feel we have to pay for the services we need and we have to cover those who simply cannot afford to pay. So what’s the answer? Not sure. But I do feel user fees are a necessity.”

Hobin, however, indicated that there are some projects that she’d like to see the city tackle. “I think we need to widen roads, take care of our green spaces, and somehow do something about traffic flow. We are huge [in the sense] that we take traffic flows from Toronto to Hamilton. Dundas, Burnhamthorpe and Eglinton are a mess in terms of traffic. It used to take me 20 minutes to get across town. Now I need to give myself 30-45 minutes just in case.”

From a driver’s perspective, the traffic alone is a heady enough enemy to contend with. Most suburbs – and Sauga is no exception – are driving cities, with public transportation coming in a far second on infrastructure hawks’ list of concerns. But while the average resident might think of the path their car needs to tread before they worry about buses and trains, the state of public transportation is on many residents’ radar.

“I’d like to see rapid transit across the top of the city linking to the airport and Toronto North with connections to the downtown core,” says Terry Babineau, a retired marketing professional who has lived in Sauga for 36 years. “I would also appreciate a faster routing system through the main areas of the city. Buses moving along congested city streets is not efficient. Look at Barcelona or Atlanta or Chicago, they all have incredible systems that route through their city and expand into the suburbs and adjoining towns.”

As for what projects residents would like to see, subways, light rail and road expansions are top of mind.

“Subway lines or light rail would link all areas of Mississauga and connect into Toronto from the north and central areas,” Babineau says. “After commuting to Toronto for 14 years along 401, it became increasingly obvious that we need more rapid links between Toronto and Mississauga. The airport should be supported with rapid transit throughout the day, not just during rush hour. I also feel commuter lanes are not being used to their full advantage. Access to rapid transit along the 401 would better encourage people to leave their cars at home.”

For some Sauga natives, the need to pay more for better services is well understood. Some, however, are still waiting to find out how much more and for what.

“I understand taxes,” says school trustee Hobin. “I think the city has to explain the need and cost benefit. [I’d be willing to pay more] I think, but how much more?”