It was a one-of-a-kind comeback by the Hamilton Tiger-Cats, since the format was a one-off that has never been used again in the Canadian Football League.

The current iteration of the Tiger-Cats, and their fans, are set to head up Queen Elizabeth Way to face the Toronto Argonauts in the CFL East Division final on Sunday, with a Grey Cup berth up for grabs. Winning a playoff game in the other team’s stadium is a tall task, but these Ticats will not have face the obstacle that was before the 1986 Grey Cup-winning team had during their playoff run.

They started a do-or-done game in Toronto already behind by 14 points on the scoreboard. How could that be?

Historically, the CFL’s West Division is deeper than the East Division. The league has tried a few band-aid solutions, all well short of making a cost-of-living adjustment to the salary caps to reflect the reality that CFL wages go further in, say, Winnipeg and Regina than in urban Ontario and Montreal. Perhaps that adjustment would be too labour-friendly and math-intensive.

In 1986, the league tried a forerunner of today’s cross-over berth, where the West’s fourth-place team makes the playoffs at the expense of the East’s third-place team if they have a better record. Rather than put a West team into the East bracket, the CFL decided the weaker division’s two best teams would play a two-game, total-point series.

Like this season’s squad, those Tiger-Cats, under head coach Al Bruno and quarterback Mike Kerrigan, stumbled out of the gate in the regular season. They were 1-5 at the one-third mark of the newly expanded 18-game regular season. They also lost the season series against the hated Argonauts, and finished in second place, looking up at Toronto.

Both had a poorer record than fourth-place Calgary in the West. So the division would be decided through a “two-game, total-point affair,” as the CBC’s late, great Don Wittman so eloquently described it in VHS-converted broadcasts that are preserved on YouTube.

For Game 2, both the Argonauts and CBC opted to put the running tally on the Exhibition Stadium scoreboard and the TV broadcast. After all, that was what mattered.

In case the Tiger-Cats’ prospectus was not grim enough, their 34-player roster — CFL teams now dress 45 — was cut down to 32 before the first play from scrimmage. Offensive tackle John Malinosky was injured in warmups. Then future hall of fame cornerback Less Browne was lost for the day when he aggravated a knee ailment on the opening kickoff.

Since this was the CFL in 1986, Browne was available to be interviewed by CBC’s Steve Armitage later in the game. 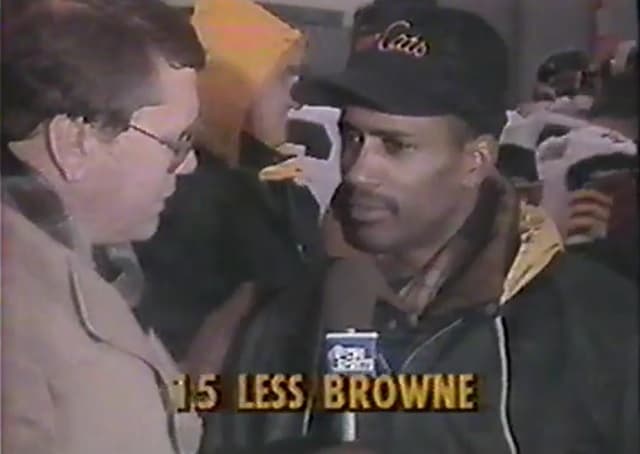 That 14-point Toronto cushion was stretched out to 26 by early in the second quarter. 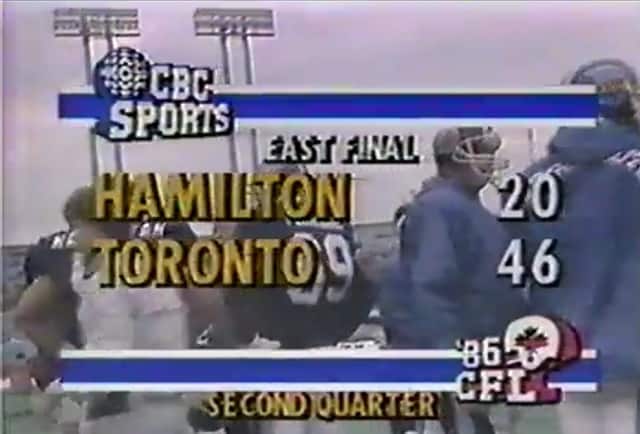 One time-immemorial truth about three-down Canadian football is that, unlike the perfectionist NFL, it holds more space for strange stuff to swing a game. Chaos finds a way.

Whatever the reason, the football Fates decided to ride with Hamilton. There might have been some luck of the Irish involved, since Tiger-Cats proprietor Harold Ballard had put a shamrock decal on Hamilton’s helmets to honour his friend and hockey great King Clancy, who had died just two weeks earlier.

Or maybe the quarterback, Kerrigan, was due a break after his college career with the Northwestern Wildcats. Kerrigan quarterbacked those ‘Cats while they were on their way to setting a record for the longest losing streak in major-college football.

Or maybe it was the fact the two ex-quarterbacks serving as analysts alongside Wittman would both eventually have a Hamilton tie, to match their orange CBC blazers. Chuck Ealey, a pioneering Black quarterback, had led the Ticats to their previous Grey Cup in 1972. The great Ron Lancaster, of course, would coach Hamilton to a championship in 1999, which remains the Ticats’ most recent title. 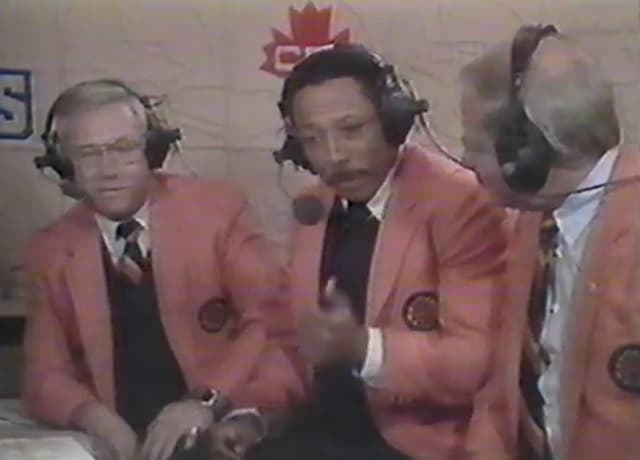 In any event, while the temperature was 8C at game time, things snowballed toward the end of the second, causing the 26-point lead to melt away.

One Hamilton touchdown drive became two, following an air-mailed long snap that ultimately gave Hamilton possession on the six-yard line. (Toronto was using a backup snapper, the late Dan Petschenig, whose son, Will Petschenig, won hockey’s Memorial Cup with the Oshawa Generals in 2015.)

Late in the half, Toronto opted for punting instead of trying a 50-yard field goal, and Ilesic shanked a punt that netted eight yards before scattering Argonauts cheer team members on the sidelines. Two consecutive touchdowns became three as the Tiger-Cats, buoyed by Ilesic’s biffed boot, drove 75 yards for a score just before halftime.

Most pro football games are won in the last two minutes of each half. That got the score to 46-41.

Backup quarterback Ken Hobart wriggled over the goal line for the next touchdown, on the last play of the third (or seventh) quarter. The teams were knotted at 49-49 heading to either the fourth, or eighth, quarter.

“This team is not going to give up,” the aforementioned Browne told the CBC. “It’s zero-zero going to the fourth quarter.” 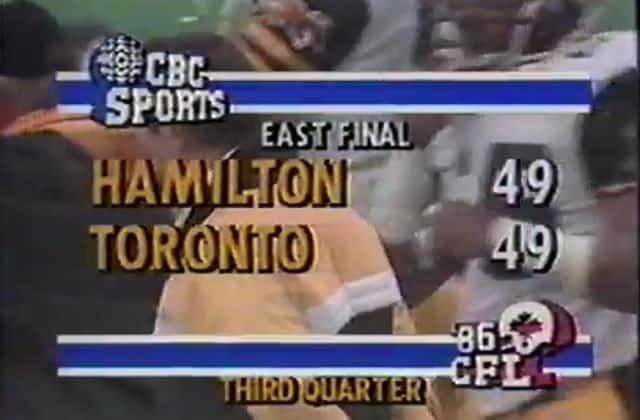 Watts made a throw early in the fourth quarter that any 14-year-old quarterback today who has had private coaching would know better than to even attempt. Chased to his left, and outside of the field numbers, the future legislator threw a high cross-field pass to the far side. Hamilton’s Terry Behne intercepted, setting up a go-ahead field goal from Paul Osbaldiston. And Hamilton led for the first time, at 52-49.

Since it was the CFL, nothing could be as simple as Hamilton continuing the rally. Toronto, far from being shattered by a blown 26-point advantage, retook the lead with just over seven minutes left. The Argonauts found a mismatch for speedster Keith Baker, since Hamilton’s starting running back, Walter Bender, had to fill in the field-side cornerback due to injuries to both Browne and Howard Fields.

(The archived telecast offers a reminder that concussion protocols were a generation away. Fields, as Armitage reported, “had his bell rung. He wants to get back in this game as quick as possible.”

(“Well, just ask him where he is,” Lancaster quipped.)

Nonplussed, the Tiger-Cats and Kerrigan owned the final minutes. Kerrigan mixed passes to Steve Stapler and to hall of fame slotback Rocky DiPietro with Miles Gorrell-led rushes from Bender on a 12-play, 83-yard drive. Ron Ingram scored the winning points when he caught Kerrigan’s pass on a fade route with 1:42 left on the clock. The defence held, making an unlikely final score stand up. 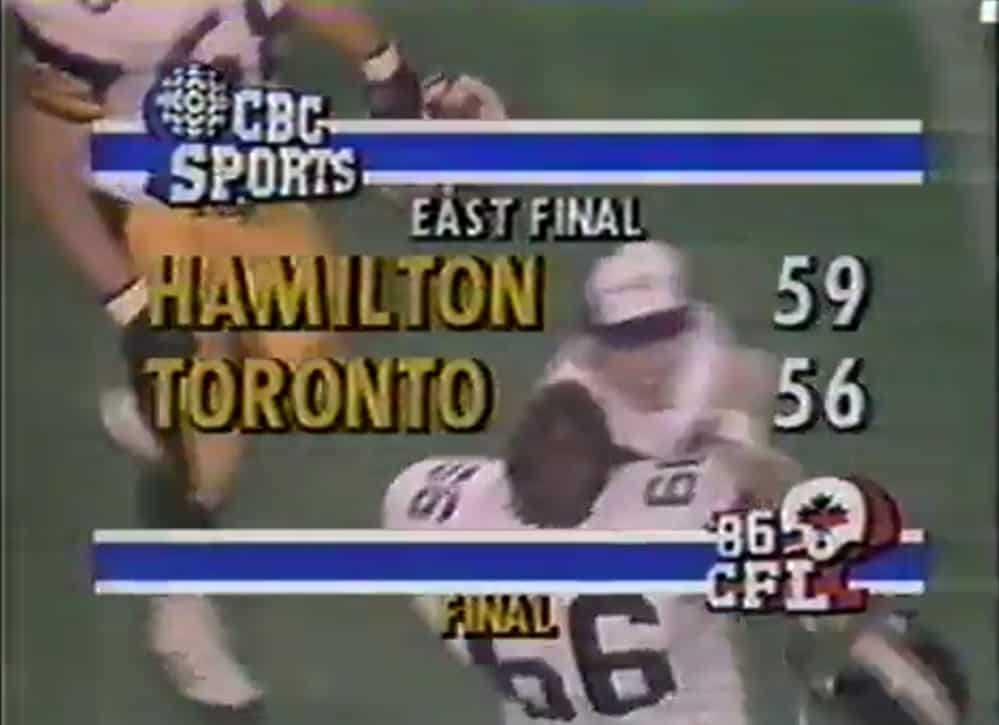 The comeback ‘Cats went on upset Edmonton 39-15 in the Grey Cup at Vancouver. It was their only Grey Cup win during the 12 seasons that Ballard owned the football club.

The two-game, total-points format for the East final was never used again. Ten years later, the league opted to use the cross-over format. So far, no West team has managed to run the gauntlet of two away games to make the Grey Cup.

The Hamilton-Toronto matchup on Sunday shapes up as a tight one, with the Tiger-Cats listed as a one-point underdog. The only certainty is that the East will be decided over a single Sunday, rather than two.