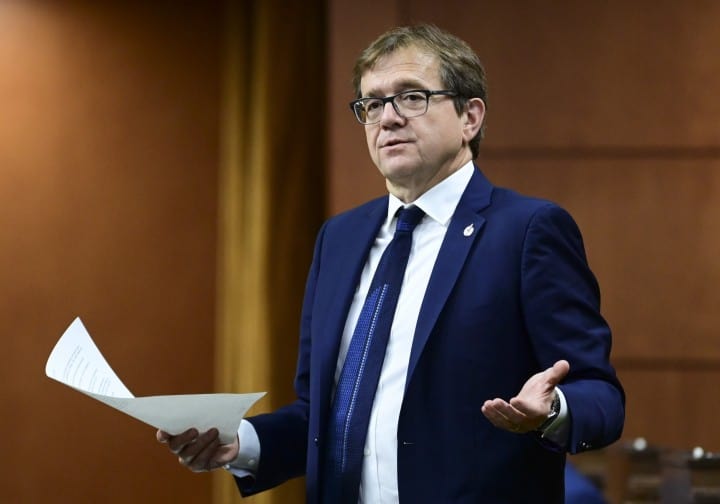 That means the end of next year will be the end of the road for plastic straws, stir sticks, carry-out bags, cutlery, dishes and takeout containers and six-pack rings for cans and bottles.

Wilkinson says many of the items that aren’t on that list, such as plastic bottles, will be getting new standards to require them to contain a minimum amount of recycled material.

He says there is also a push to standardize how plastic items are made, from the types and amounts of plastic used to the dyes and adhesives, so recycling them is easier.

The Alberta government announced Tuesday it wants to become a hub for Canada’s expanding recycling industry.

Canada currently recycles less than 10 per cent of the three million tonnes of plastic it produces each year, and along with the provinces has set a goal of have zero plastic waste ending up in landfills by 2030.

“There is an enormous amount of opportunity for improvement,’ said Wilkinson, in an interview with The Canadian Press.

Canada intends to add plastics to a list of toxic items under the Canadian Environmental Protection Act, and is issuing a discussion paper on the banned items and recycled content standards and other plans.

Wilkinson said the aim is to have everything in place by the end of next year.

A 2019 report commissioned by Environment Canada found Canada’s recycling industry was hampered by cost and access. It is cheaper and easier to produce new plastic than it is to recycle it, reuse it or repair it, and without minimum standards requiring the use of recycled content, the market for recycled plastic was small.

The report said in 2016, Canadians threw 3.3 million tonnes of plastic away, 12 times what was recycled.

It said there were fewer than a dozen recycling companies in Canada, employing about 500 people with about $350 million in revenue between them.

Until recently, Canada and most other wealthy nations shipped much of the recyclable plastic tossed in their blue bins across the ocean to Asia. China in particular was the biggest buyer of the items, which were recycled into plastic pellets used in its massive manufacturing sector.

But China slammed the door shut to that option at the beginning of 2018, tired of being the world’s garbage dump. So much of the material arriving by the shipload could not be recycled and ended up in landfills in China instead.

France began phasing in a ban in January, starting with plastic plates, cups and cotton buds. Straws and cutlery will be added in 2021, and tea bags, fast-food toys and takeout containers in 2022.