Stats Show Distracted Driving is a Serious Problem in Peel

We at insauga have documented numerous examples of road incidents in Mississauga where drivers are just doing things that defy logic and acceptable behaviour. The latest "daring" individual was this guy, driving backwards on a busy road in broad daylight in Brampton. At least he wasn't doing something even crazier, such as ghost riding the whip.

I would categorize this particular case as people getting distracted because of an external factor outside their own control (such as the person who was filming this crazy driver with their phone camera), but people more often than not provide distractions for themselves. Life is complicated enough for most of us and accidents can happen. According to a 2012 poll conducted by Leger Marketing, these are some of the most common causes of distracted driving: 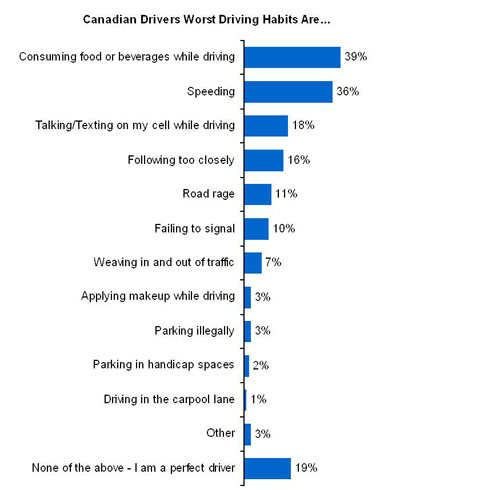 In 2016, the Ontario Provincial Police reported that that was the fourth consecutive year that distracted driving caused more deaths in Ontario than speeding, people not wearing their seatbelts, or even drunk driving. There were 65 fatal crashes on OPP patrolled roads where distracted driving was either the primary cause or a contributing factor.

"Road deaths linked to distracted drivers will not let up unless every road user says 'enough is enough' and shows a complete intolerance for what continues to be the most life-threatening driver behaviour on our roads," OPP commissioner Vince Hawkes said in a news release.

The Ontario government does offer some tips on avoiding distracted driving, such as:

These are just for distractions pertaining to your phone. There simply enough method of legislation against the myriad of causes for distracted driving, since a good chunk of them can be attributed to emotion or general human behaviour and our own reactions to unanticipated events. Can you really find a way to legislate against road rage in the heat of the moment?

But these suggested tips seem like common sense, and if people are not using simple common sense, drivers in Brampton have only themselves to blame for causing distracted driving in the first place.

Maybe this trend towards self driving cars isn't such a bad idea after all, if it will prevent distracted driving from being as much of a problem in the future.

A new BBQ restaurant is coming to Mississauga
We are always happy to see new and unique restaurants popping up around the city and foodies can agree that Mississauga is where the food scene is at.
END_OF_DOCUMENT_TOKEN_TO_BE_REPLACED