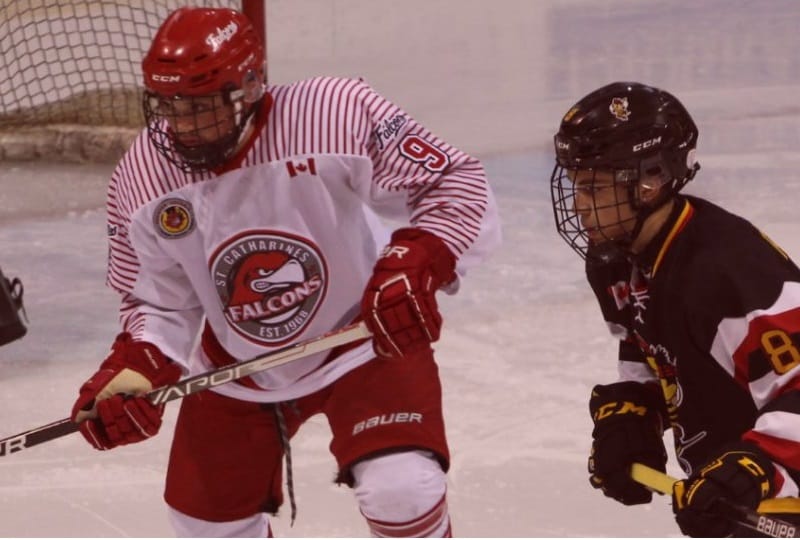 The St. Catharines Falcons, backed by airtight Andrew MacLean, made sure Jack Gatecliff Arena could have one last championship celebration.

MacLean, the 20-year-old goaltender who started the season being caught in a numbers game, shut out the Hamilton Kilty B’s for the second Friday in a row as the Falcons advanced to the Sutherland Cup, the Greater Ontario Junior Hockey League hockey championship. In front of their hometown fans, St. Catharines held on for a 1-0 win in Game 6 to wrap up at a 4-2 serries win in the Golden Horseshoe Conference final.

St. Catharines’ Nick Rubino scored 3:39 into the contest, finishing off a play in the Hamilton goalmouth. With MacLean making 26 saves, including 11 in the third period, that was all that coach Tyler Bielby’s Falcons needed to clinch their first conference title since 2018.

The Kilty B’s, thanks to goalie Braedyn McIntosh and his 21 saves, kept it interesting until the bitter end. But they weren’t able to break through with the teams playing for third time in four nights, which included a double-overtime contest in Game 4 on Tuesday.

The win sends the Falcons on to the three-team Sutherland Cup, and ensures there will be a bit more spring playoff hockey at the fabled barn known as ‘The Jack.’ The GOJHL’s three-conference alignment means that the championship is decided through a round-robin, with all the teams playing each other once at home, and once away, to decide a one-game winner-take-all showdown.

The Falcons’ last Sutherland Cup was in 2012. The club is moving to the Seymour-Hannah Centre next season.

MacLean, who shares a hometown of Port Huron, Mich., with Toronto Maple Leafs goalie Jack Campbell, landed with the Falcons at the start of the season. He was cut by the Falcons’ downtown neighbour, the Niagara IceDogs of the Ontario Hockey League, who are limited to three 20-year-olds. The Falcons reached out, and MacLean made the most of the opportunity at the Junior B level.

In the regular season, MacLean had a league-record 10 shutouts and won the goalie grand slam by finishing first in goals-against average (1.45), save percentage (.943) and wins (27). The six-foot-two goaltender has had four shutouts in the playoffs, including two against Hamilton.

Nolan Underwood led Hamilton in playoff scoring with 20 points. That included a clutch two-goal, one-assist night during the Kilty B’s elimination-evading 4-2 win in Game 5 on Wednesday.

What a season, but not the end we wanted. #BringBackTheBuzz | #HamONT pic.twitter.com/RAF29BLPwT

The dramatic double-OT game the night prior, a 3-2 St. Catharines win, reads like a turning point in the series. The teams traded a pair of power-play goals during the regulation three periods, but McIntosh and MacLean went save-for-save when their teams were at even and full strength. But 3:40 into the second OT, Falcons rookie forward Mitchell Armstrong stole the puck deep in Hamilton’s zone and scored for a 3-2 win.

Armstrong has chipped in six goals toward the playoff run, topping his total of four from 42 regular-season games.

The Falcons and the Cambridge Redhawks, the Midwestern Conference champions, will wait to see who joins them at the Sutherland Cup. Cambridge polished off the Elmira Sugar Kings in five games in the Midwestern final.

The Chatham Maroons lead the Leamington Flyers 3-2 in the Western Conference final. Chatham hosts Game 6 on Saturday, but Leamington would host Game 7 if they can force it.