Some Interesting Facts about Mississauga's History

I attended a recent talk at the Chappell House in Riverwood Park about the historical development of Mississauga from the vast wilderness that was once inhabited by the Indigenous peoples, the Mississaugas of the New Credit, to the sprawling suburban/urbanizing landscape we know today as Canada's sixth largest city. The talk was conducted by Matthew Wilkinson of Heritage Mississauga, and sponsored by the Community Foundation of Mississauga and the Ontario 150 project.

Mississauga was not always known as one of Canada's big cities. As we celebrate the 150th anniversary of not only Canada, but Ontario and Peel Region, it may be somewhat hard to define a distinctive Mississauga identity. Because in reality there are so many stories about Mississauga that predate 1867, which means the history of this place we call home stretches back more than just those 150 years. 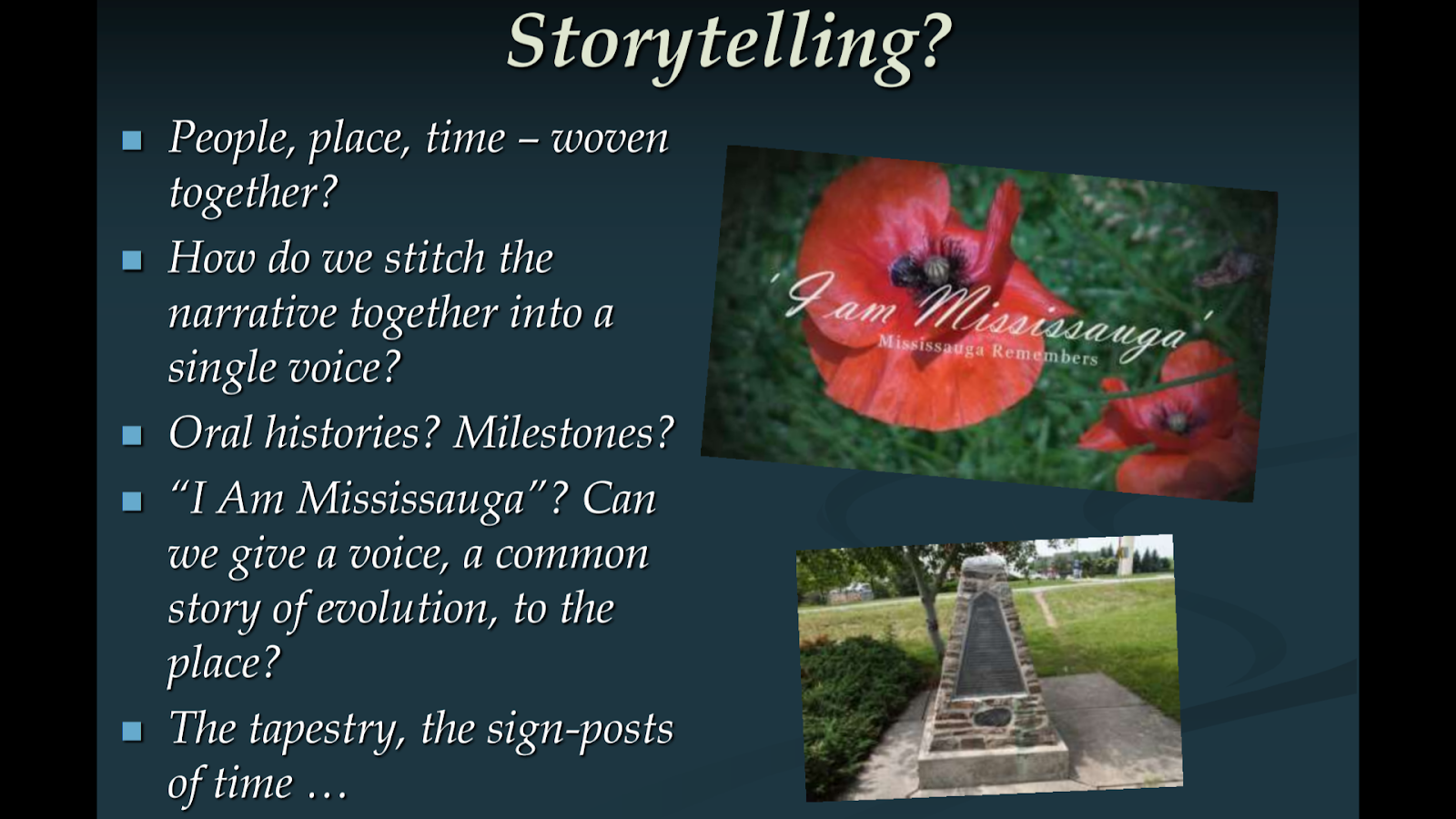 There are many stories woven into the fabric that resulted in today's Mississauga. Here is a sampling of those interesting facts about the history of Canada's sixth largest city, as outlined in Wilkinson's presentation: 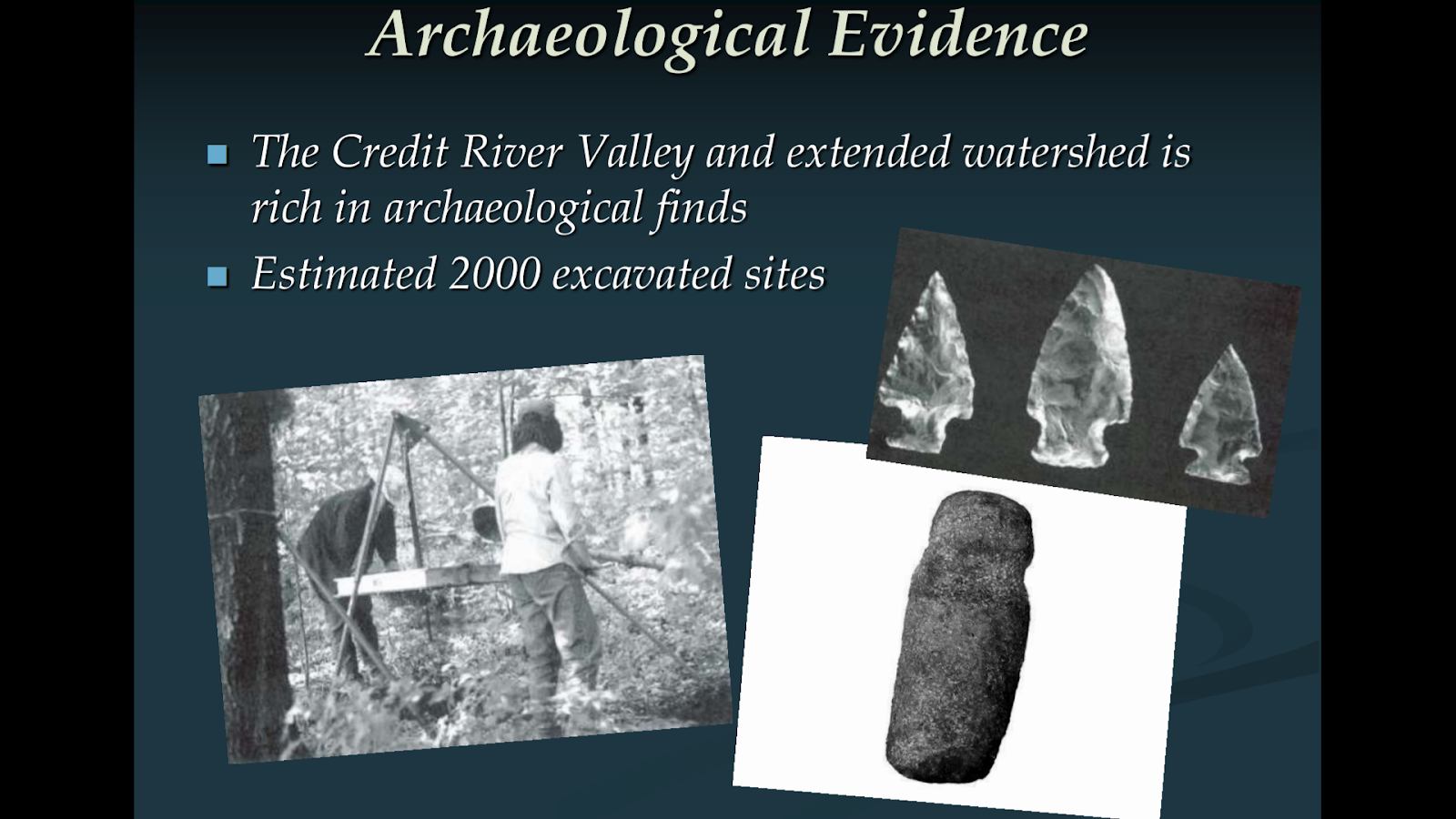 While most people know that the land geographically known today as Mississauga was named after the original Indigenous inhabitants, those historical linkages cannot be exaggerated. Mississauga has been estimated to have around 2,000 excavated sites unearthing various Indigenous relics and artifacts. In a city of over 700,000 people, that is a pretty incredible factoid to throw out there as a conversation starter. 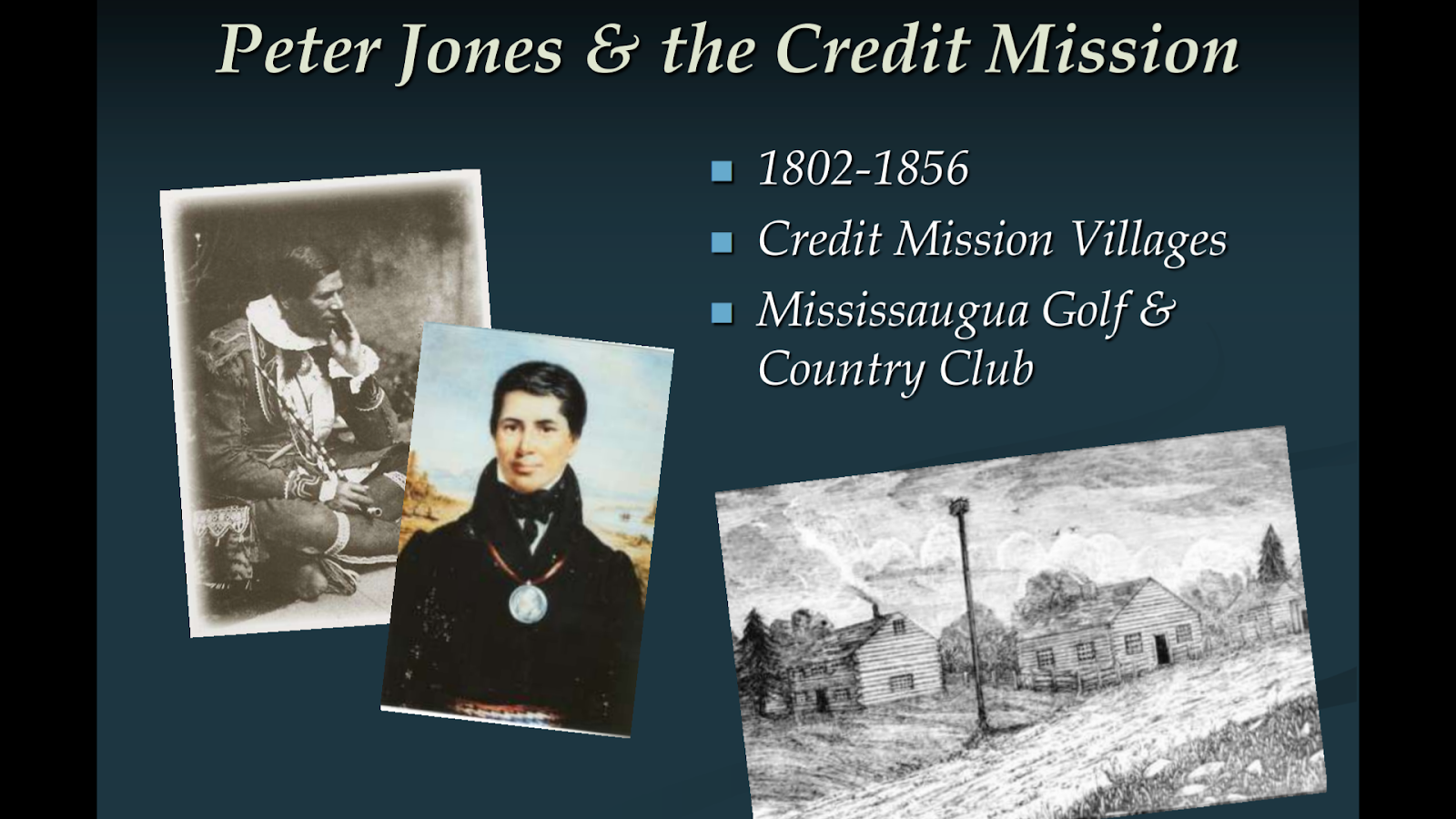 Speaking of the Indigenous population, Mississauga's most well known citizen today may be former mayor Hazel McCallion, but during the 19th century the most well known resident was Peter Jones, an Ojibway who converted to Christianity and became the first Indigenous Methodist in Canada in 1833. He spoke English as well as his own native Indigenous languages, was educated in the British system, and was a chief; undoubtedly traits which made the British overseers of the pre-Confederation Canada very nervous as Wilkinson opined during his presentation. Another interesting fact was Jones also mentored Egerton Ryerson, one of the early founders of public education in Ontario. 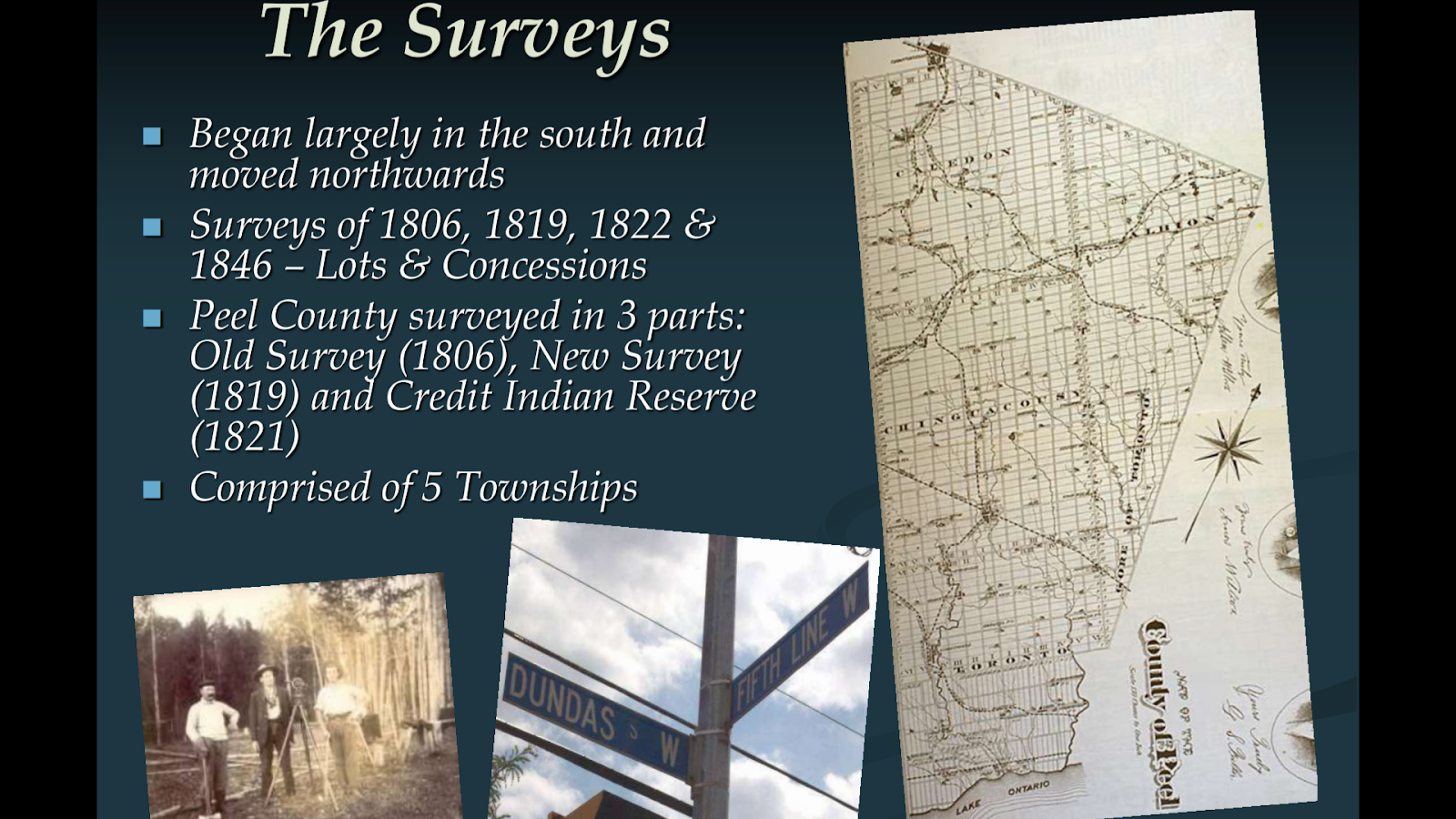 The earliest surveys of what is now known as Peel Region were done in a horizontal and vertical grid system, and they defined who owned which parcel of land. One of the interesting points of note is why the present day intersection of Dundas Street and Fifth Line West is still named as such, because only one of them is still currently running west at all.

Despite running north and south, Fifth Line West was never renamed and today still bears that name. It is a little strange to see an intersection with two streets named 'West' running across through each other. Another factoid is that Hurontario was once known as Centre Street, because it literally ran through the center of Peel County in the north-south direction. 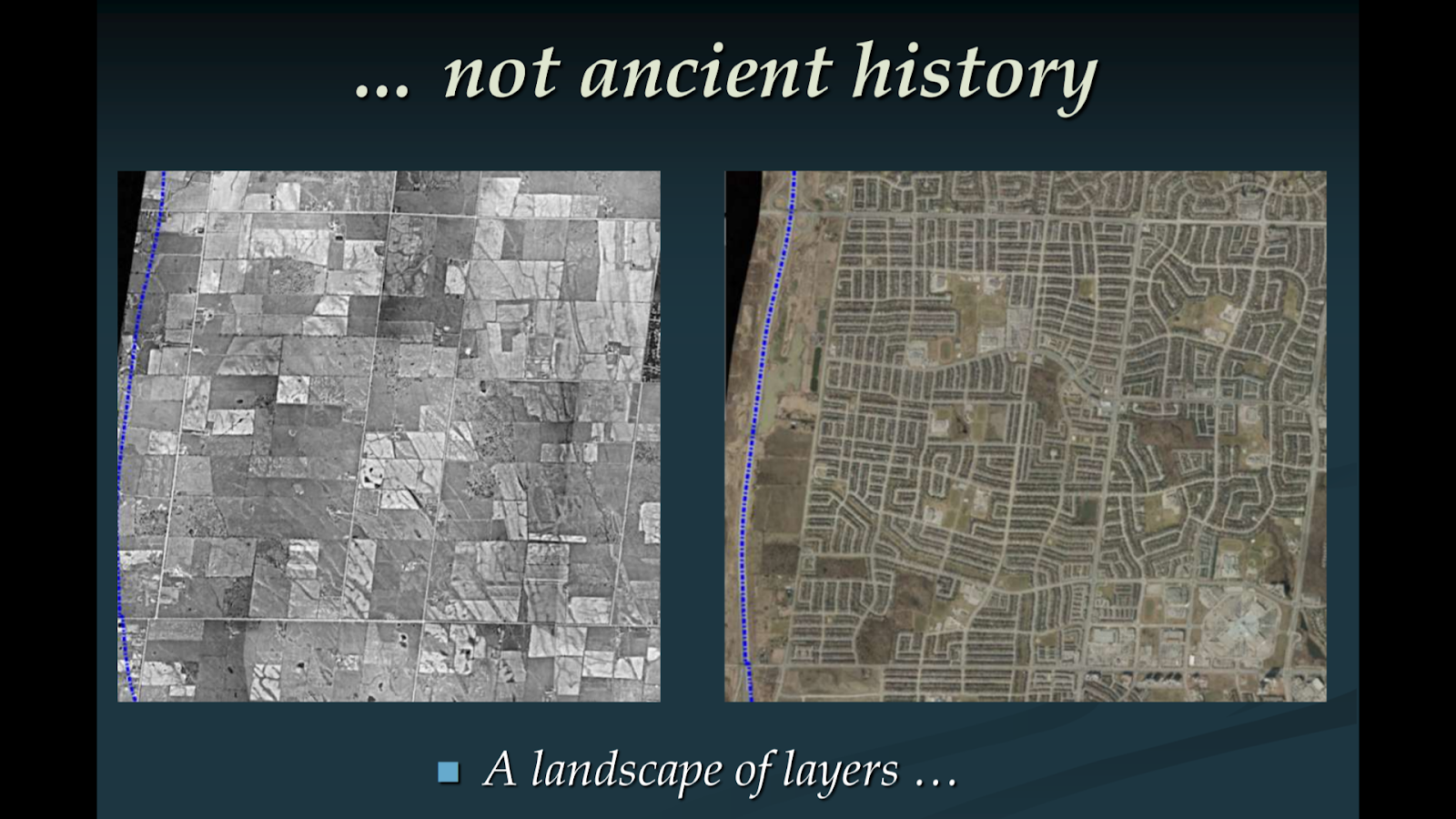 This slide shows that even after several generations, the landscape has not changed much and still maintains some of the old patterns. The left photo depicts the Churchill Meadows/Central Erin Mills area circa 1954, and the photo on the right is the same area in 2016. You can see that old grid system is still there, an indication that the past isn't as settled into ancient history as one might think. 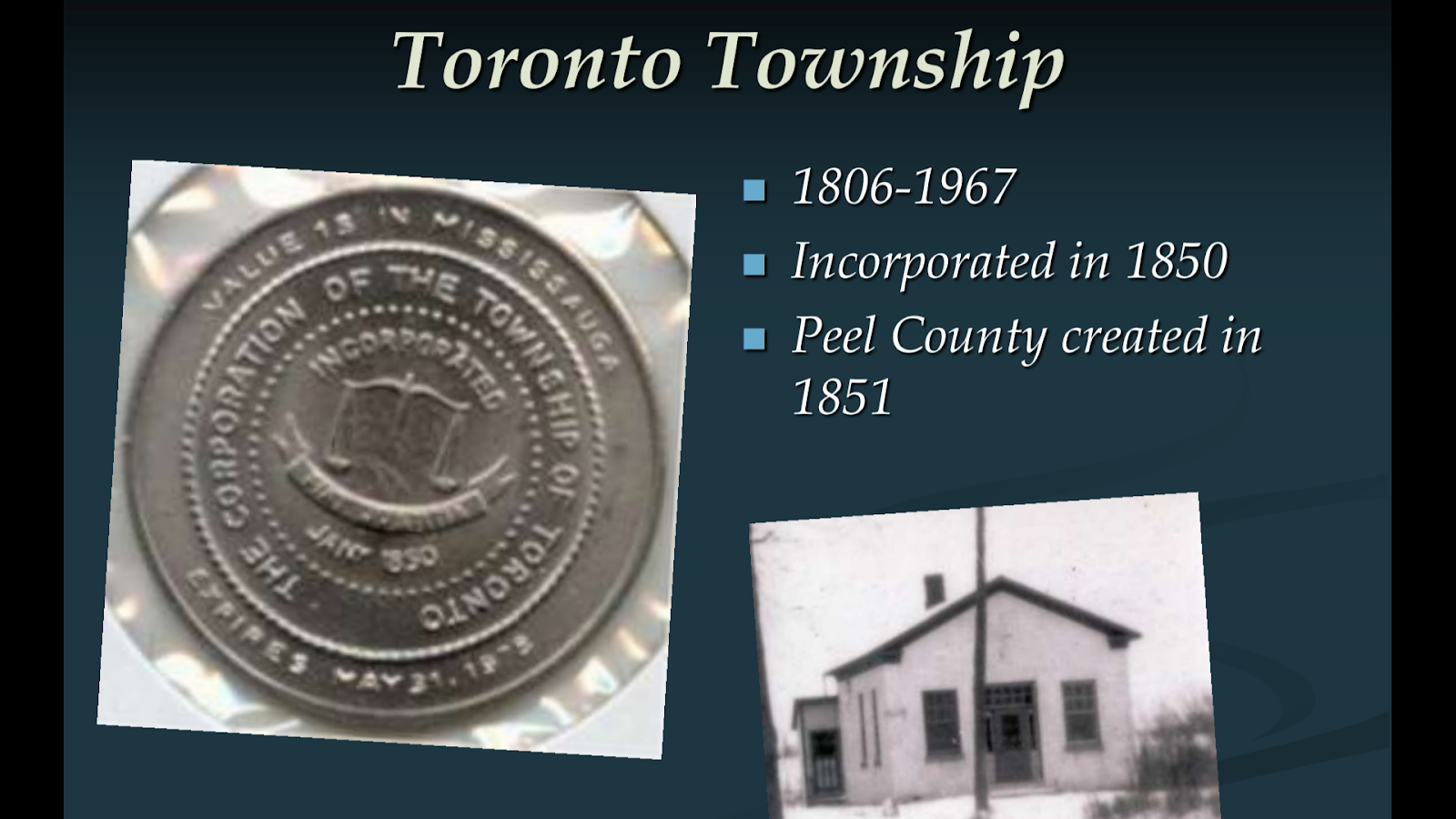 Before Mississauga was chosen as the official name of this city, we were once known as 'Toronto Township.' Wilkinson did also confirm that the current Toronto indeed stole that name and adopted it for themselves (Toronto was once known as 'York'). The first head of Toronto Township (the reeve) was William Thompson (1851-1855), but strangely enough, he is buried in Oakville. 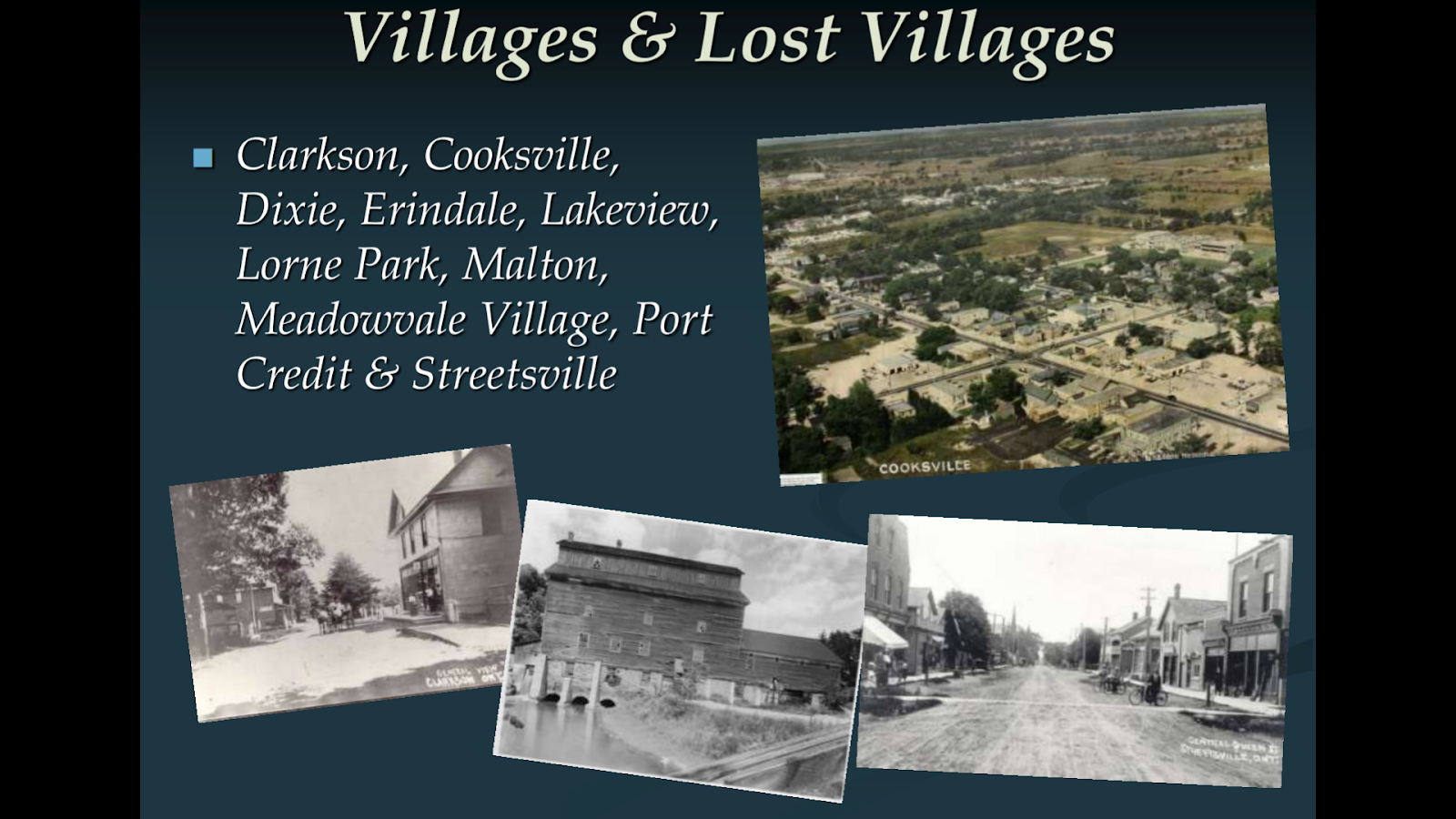 If you ever go into Mississauga City Council chambers, these names adorn the ceiling and is a reminder of the communities that came together to form Mississauga in 1974. But not all were townships or villages; Meadowvale Village was established in 1980 as a conservation district. 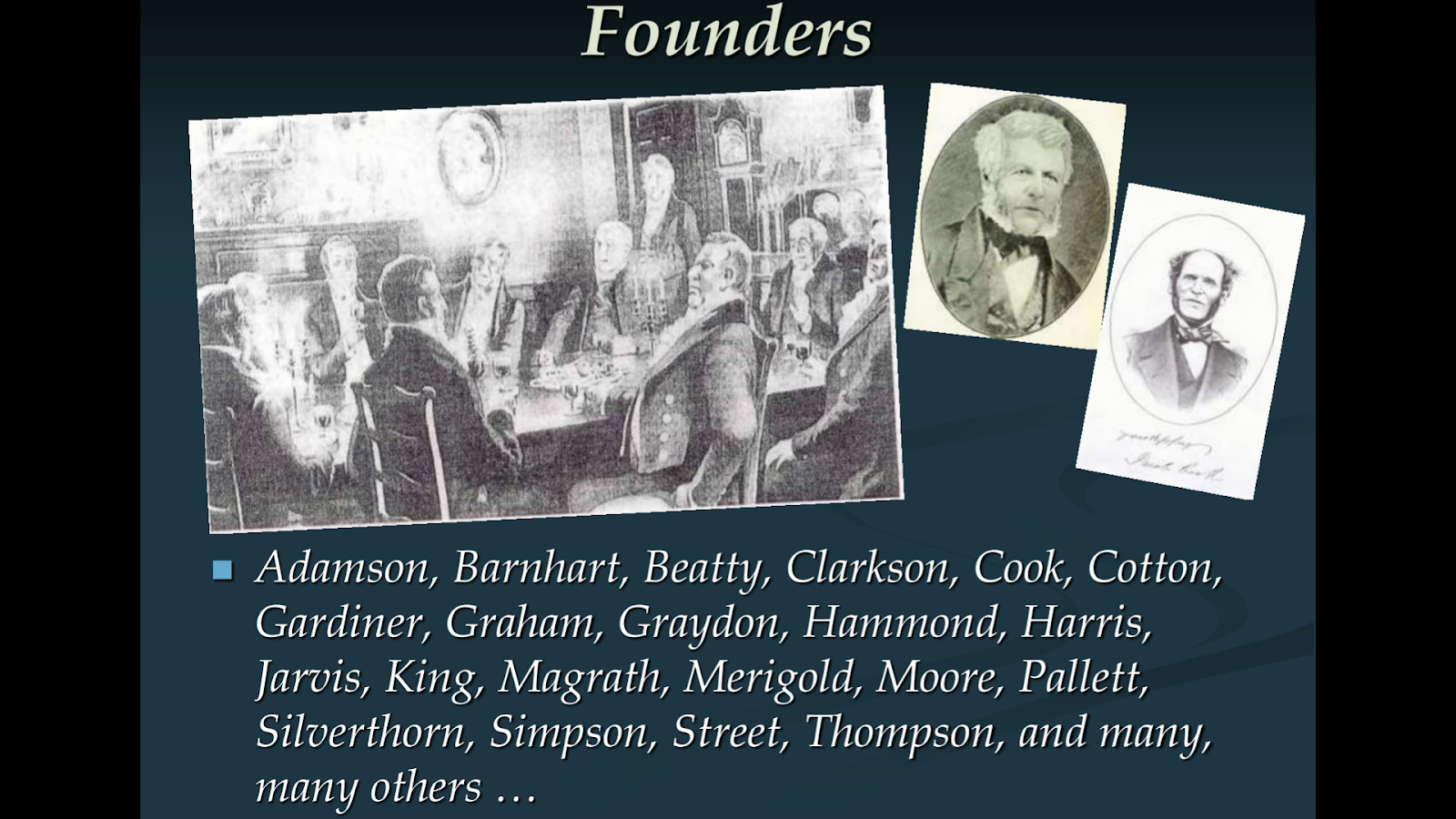 The above painting of the some of the founding families in Mississauga is merely a fictional scenario of a hypothetical meeting they would have had, but you might recognize some of the names: Clarkson, Cook (for Cooksville), Graydon, King, Street (Streetsville). 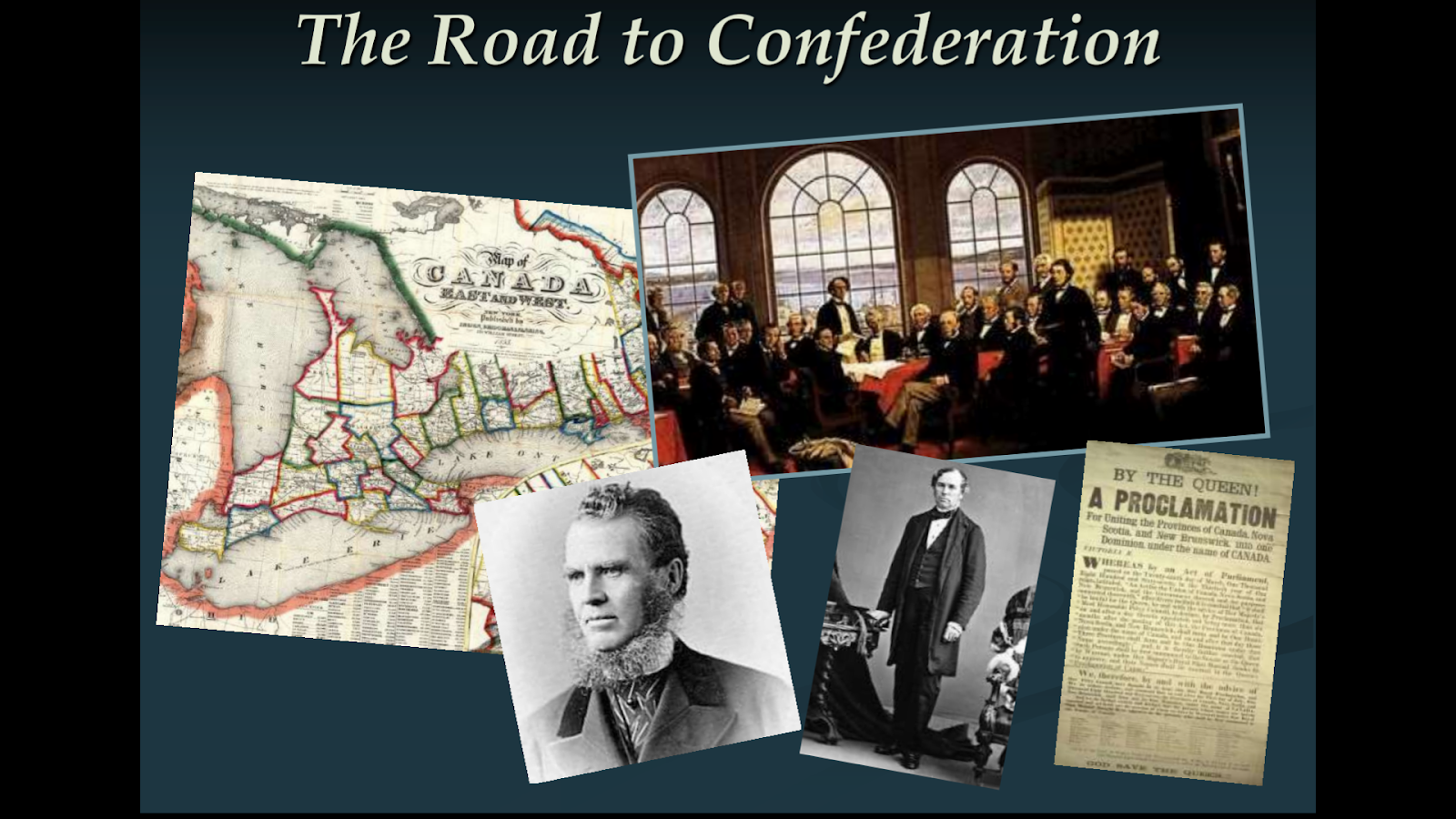 When most people talk of the Fathers of Confederation, the names that mostly come to mind are John A. MacDonald, George Etienne Cartier, or George Brown. But William Pearce Howland (bottom centre) isn't as well known as those aforementioned men. I bring up Howland because there is a Mississauga connection to the Fathers of Confederation, as Howland settled in Cooksville when he was 19 before moving on to a long business and political career.

Wilkinson revealed in his presentation that in 2018 a plaque commemorating Howland's role as a Father of Confederation will be unveiled at the corner of Dundas Street and Confederation Parkway. As more details come forward regarding this unveiling, insauga will provide additional information in the future. 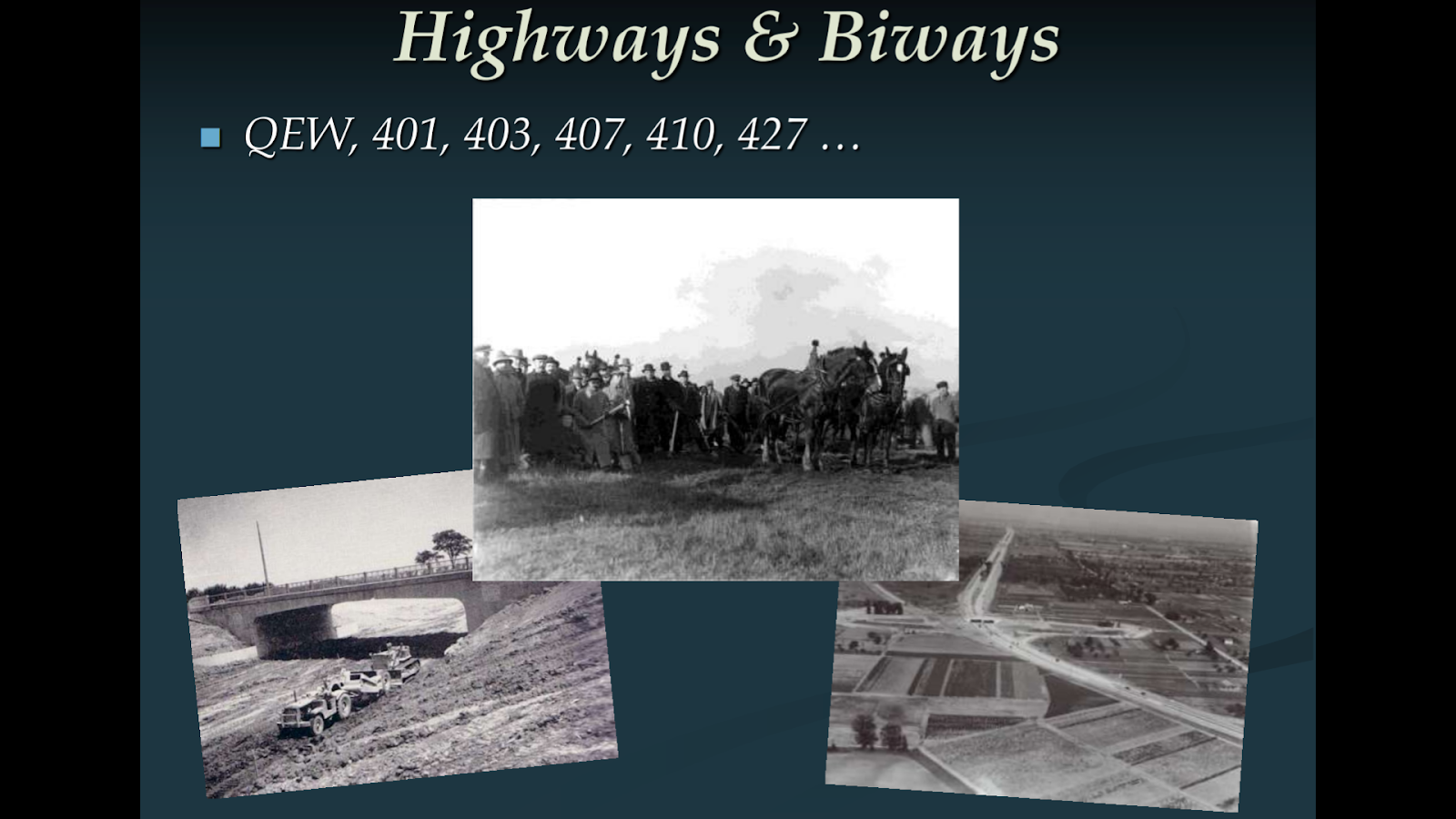 Mississauga is undoubtedly a city of highways. In 1937, the Queen Elizabeth Way opened, but the sod turning ceremony took place in Mississauga. At the time, it was a barely used route resembling little more than a country road with the sparse traffic that crossed through, and people back then were concerned that no one would use the QEW. That would be one of the most laughable things to say out loud today. 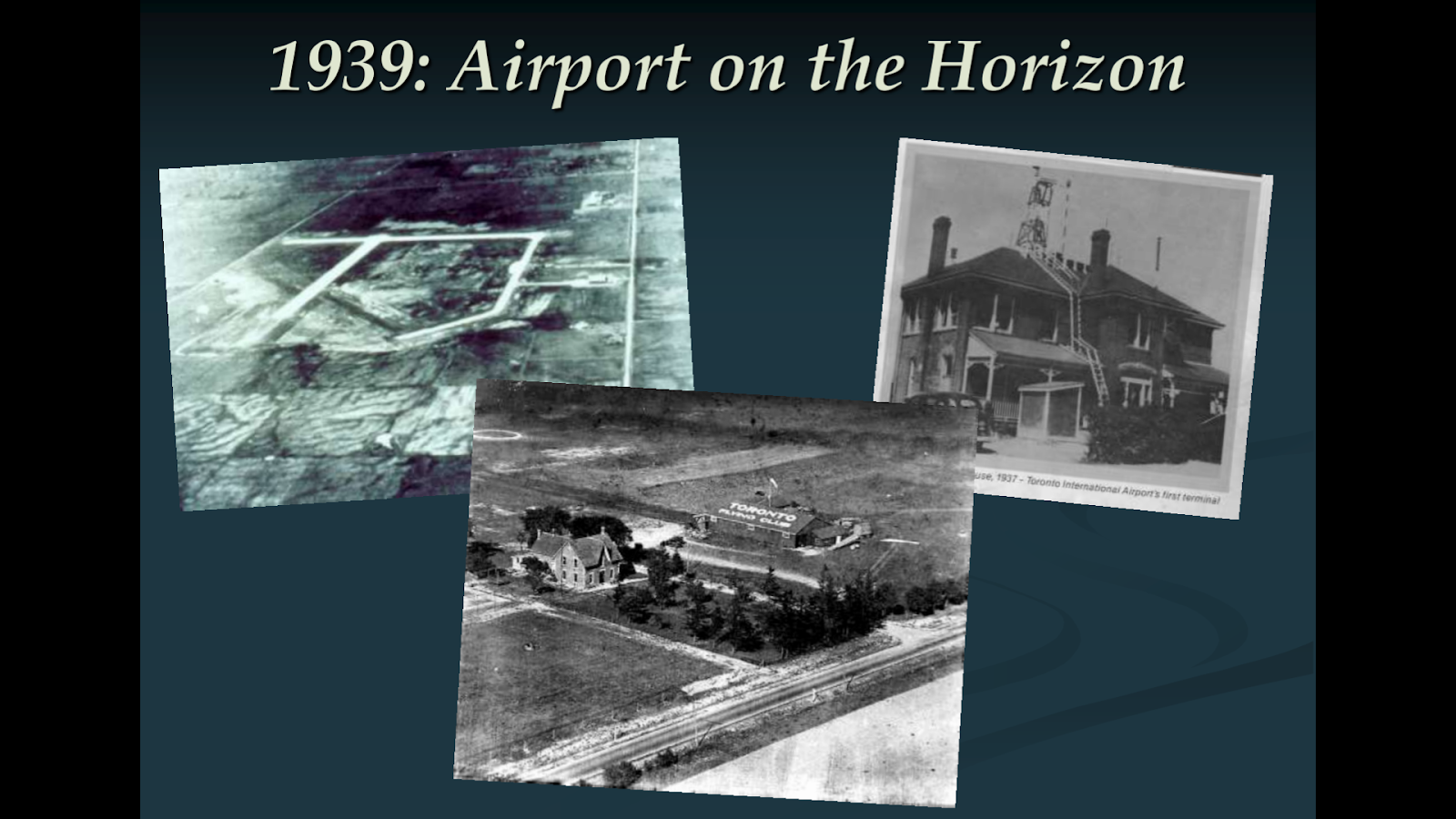 Sometimes, it's hard to imagine about the humble beginnings of Pearson International Airport. It went from this tiny piece of land up in Malton with a small airport... 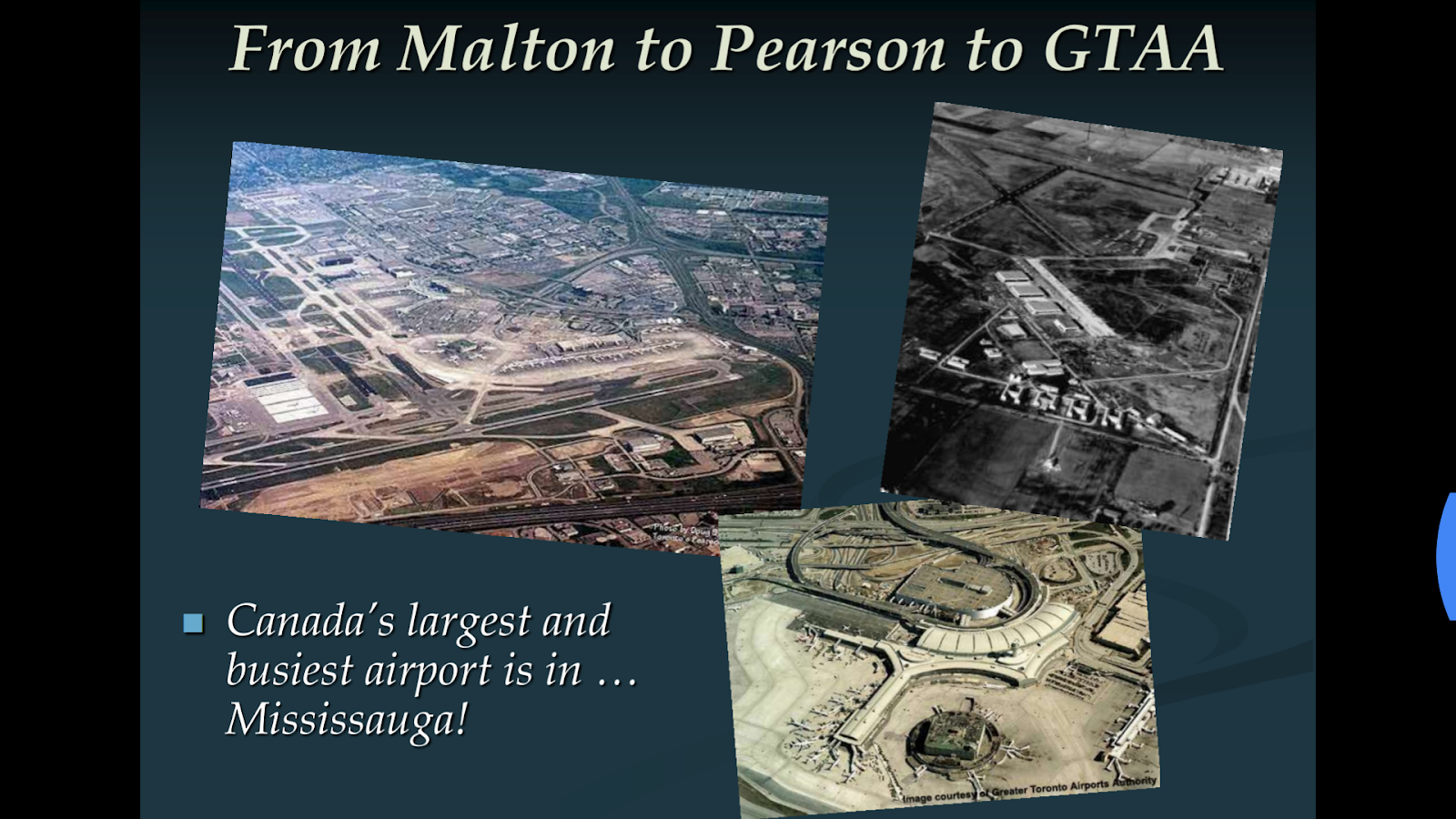 …To this, Canada's largest and busiest..right here in Mississauga. Wilkinson revealed that one of Hazel McCallion's last motions in city council before her retirement was to put "Welcome to Mississauga" signs on all the exits from the airport. Obviously that motion didn't pass, and today some compromise was reached in terms of which city would get to welcome people who just landed after a long flight. 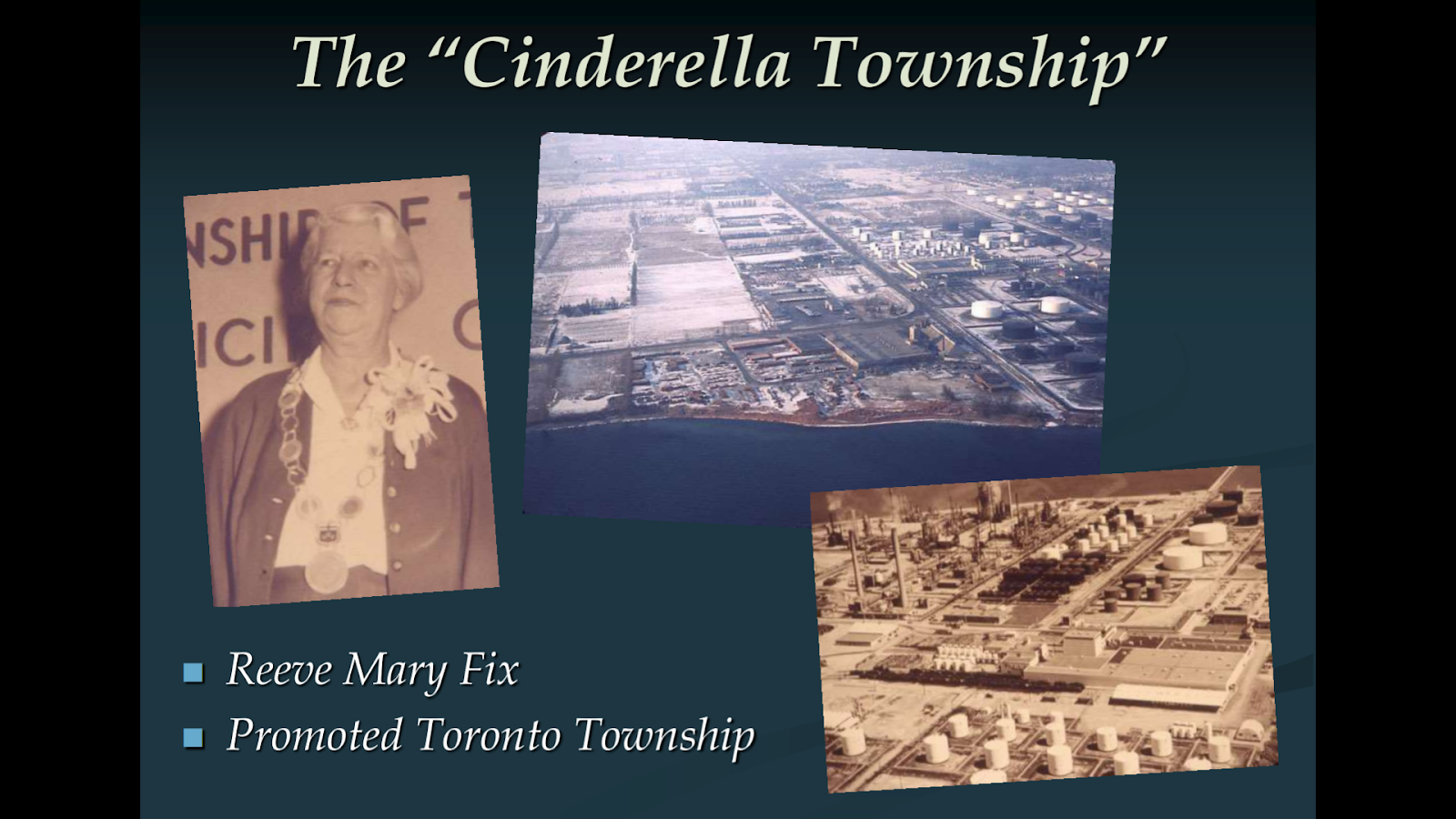 Toronto Township's former reeve Mary Fix was considered an early reformist figure in local politics, someone that Hazel McCallion herself cited as one of her personal heroes. There is a fascinating documentary the city put out a few years ago called "The Cinderella Township" which compared a promotional video of Toronto Township as a place for business and settlement in 1957, and comparing the areas featured to what was in Mississauga today. It depicts "three sisters", Toronto, Hamilton, and present day Mississauga and how as the literal 'middle child' (geographically of course) has so much to offer. 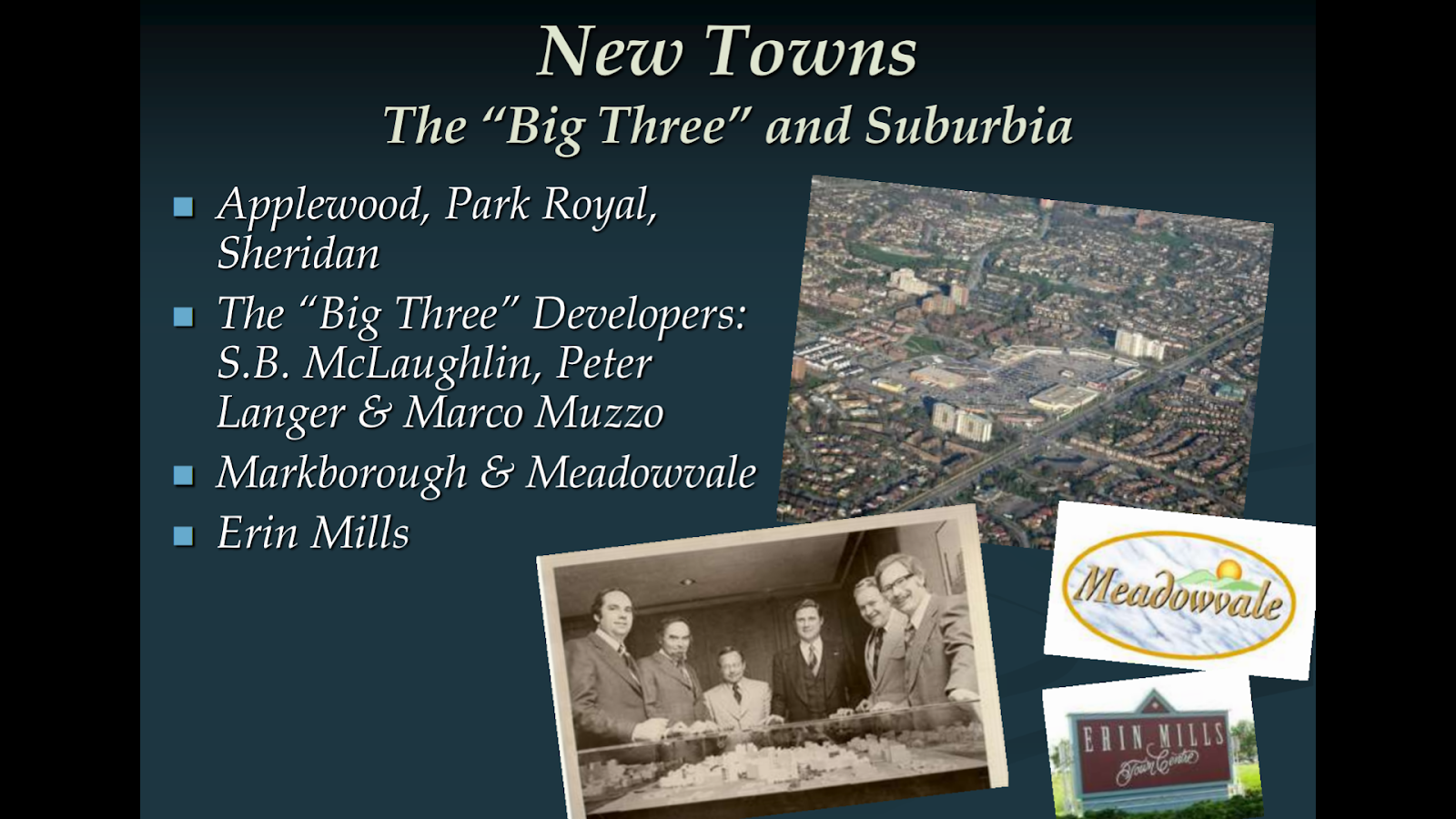 During the booming period of Mississauga's suburban development, a number of what were then referred to as planned communities, or 'new towns', and some of those were in Mississauga, such as Erin Mills and Meadowvale. And yes, if you recognize one of those big name developers, that is indeed the family of Marco Muzzo, who is currently serving a 10 year prison sentence for hitting a family while he was operating a vehicle impaired, killing a grandfather and his three granddaughters. 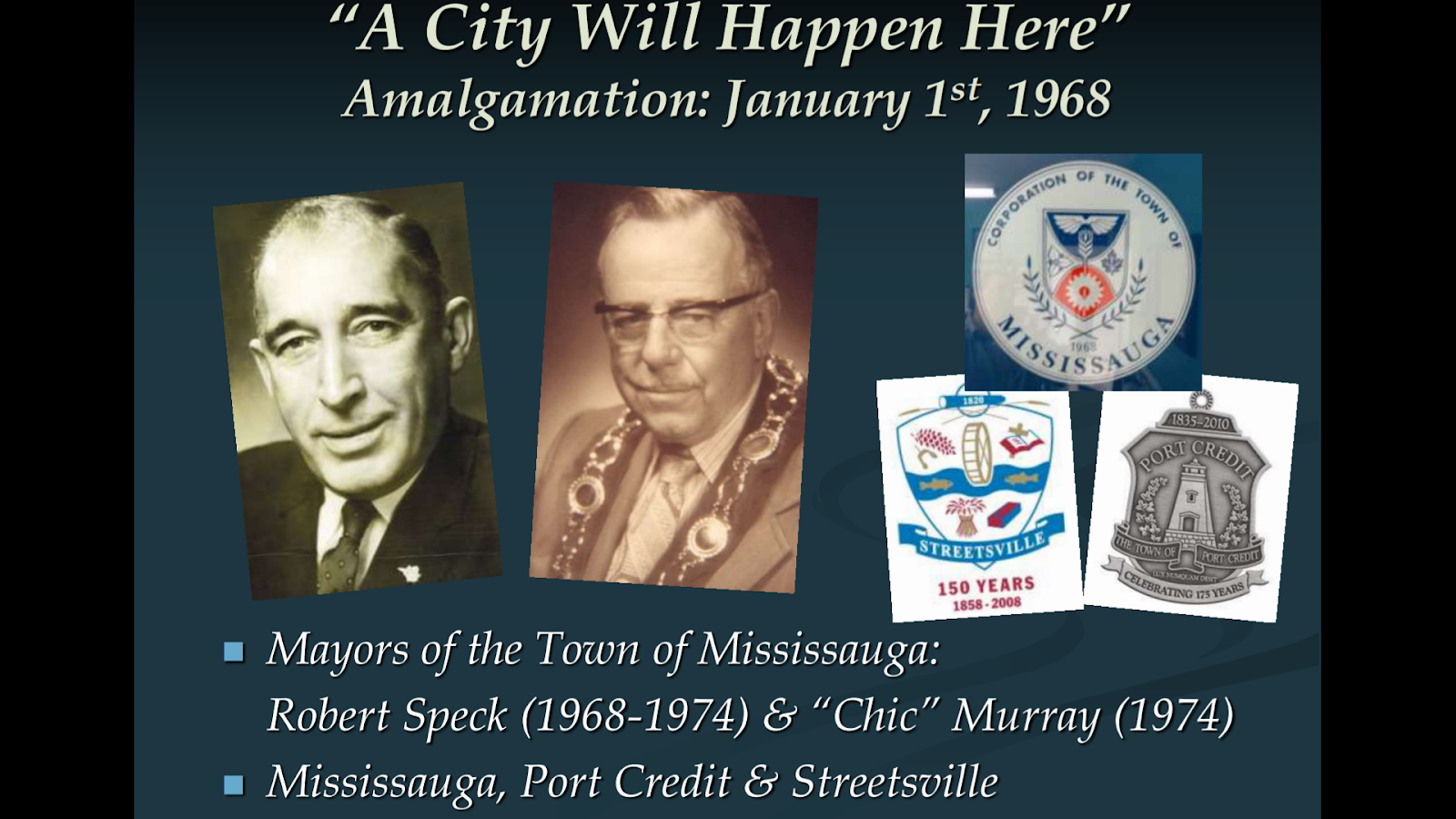 As Toronto Township transitioned from its rural town phase on its way to becoming designated as a city, it was the Town of Mississauga, and Robert Speck was the reeve (Robert Speck Parkway was named after him). Sadly, Reeve Speck died in his mid 50s due to complications from heart surgery, and was replaced by Chic Murray.

Murray holds the distinction of having held the role of head of the municipality without actually being elected to it, as he was defeated by the City of Mississauga's first mayor, Dr. Martin Dobkin. The Chic Murray Arena is named in his honour.

Coincidentally, Murray's son, Jim, is currently a close friend and confident of Hazel McCallion, which is ironic given that the elder Murray was part of a local political faction that opposed McCallion during the 1970s. 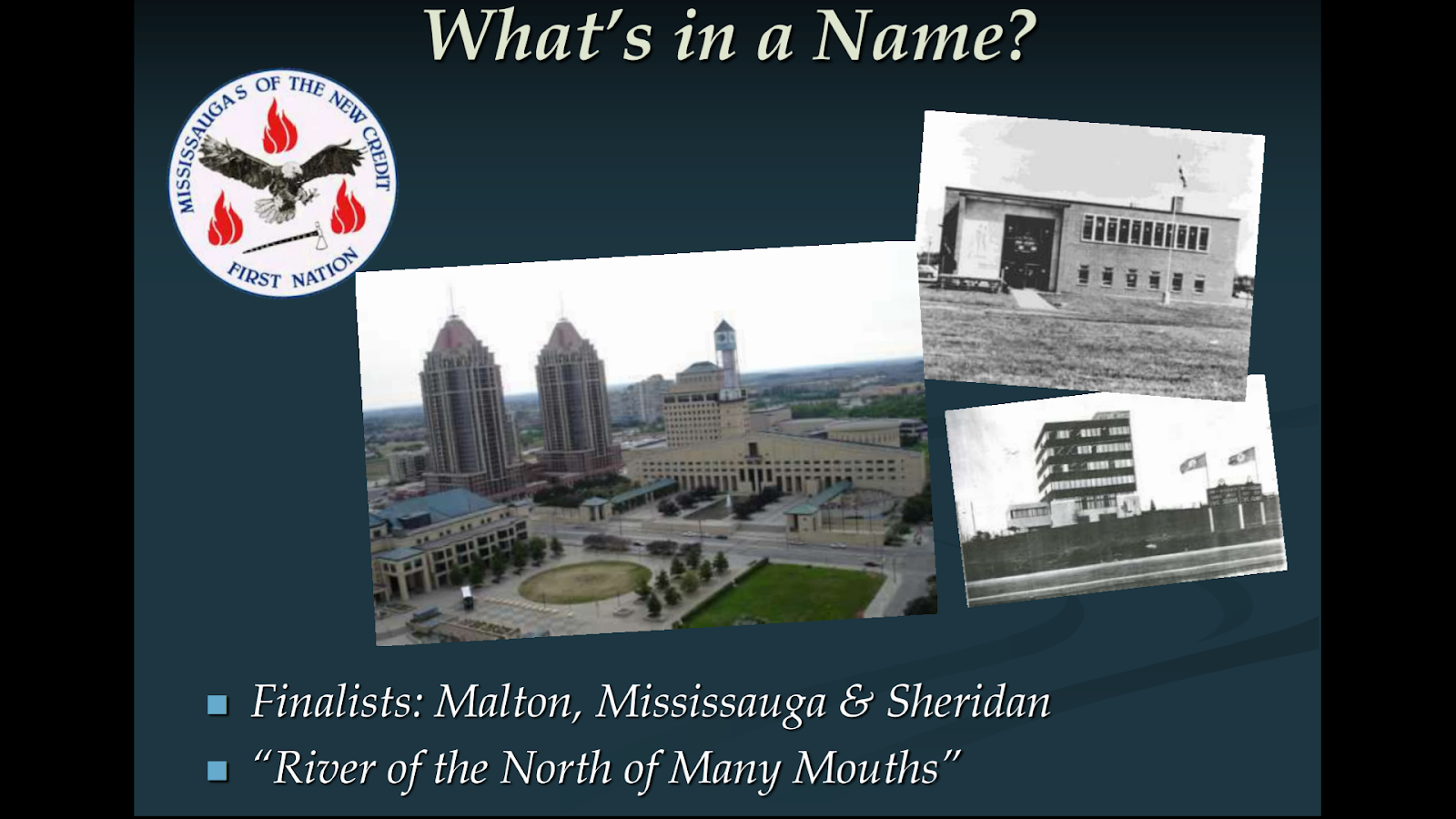 The decision to name this city Mississauga was actually more contentious than you would realize. Operating originally under the working name 'City of South Peel,' citizens had to vote in a plebiscite in order to determine the new name and had three options to choose from: Sheridan, Malton, and Mississauga. The final result was Mississauga, which won with 53 per cent of the vote, Sheridan obtained 46 per cent, and Malton got one per cent.

The name Mississauga isn't exactly new to the people living in the municipality during the time when they were deciding a new name, and it's not just because of the Mississaugas of the New Credit. The Mississauga News since 1963 had been using that name, even before the city became known as Mississauga. 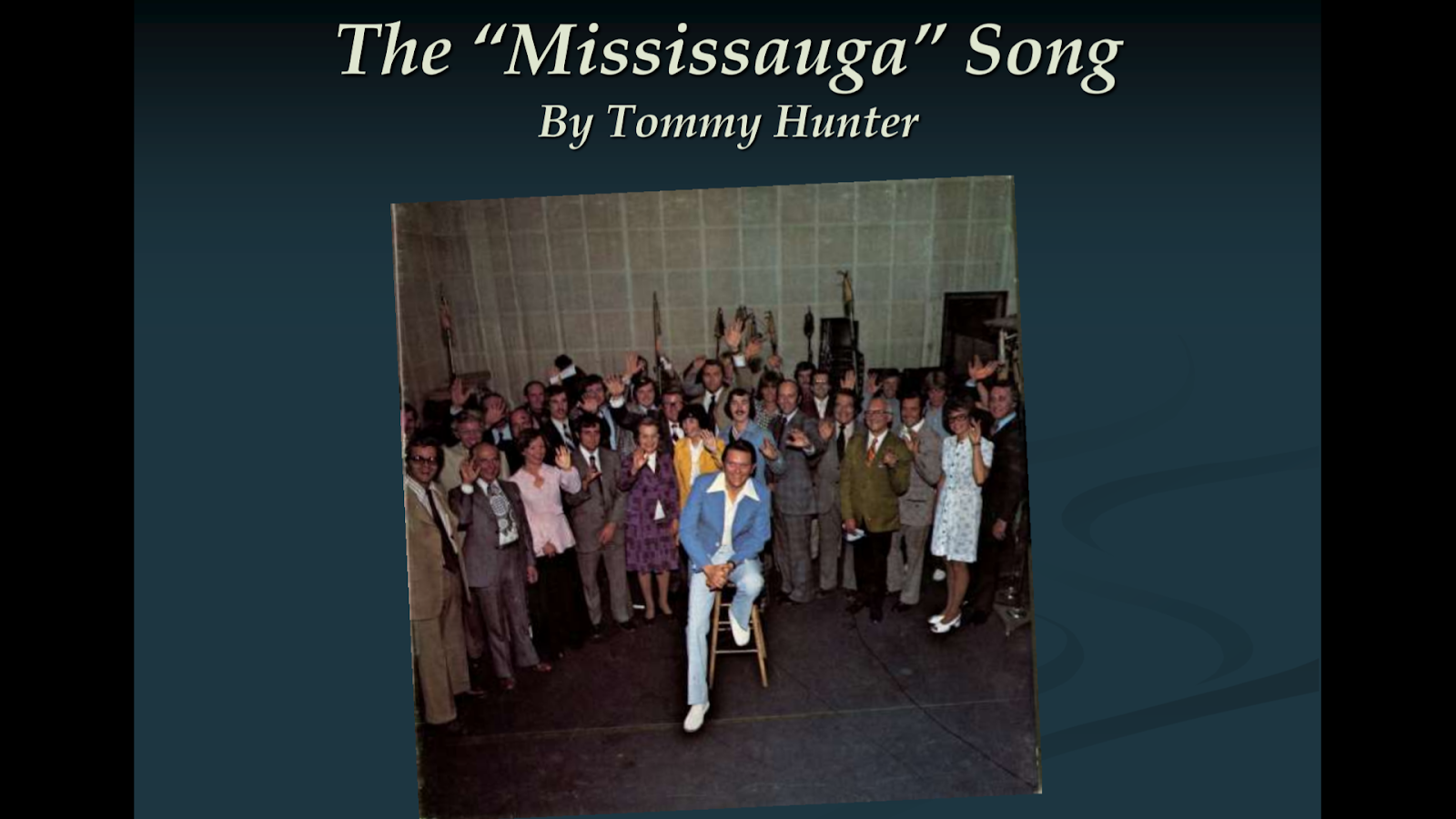 As a way to promote and market the new city, a jingle was written and sung by musician Tommy Hunter, and you can have a listen to it here on this page the city put up commemorating the 40th anniversary of Mississauga a few years ago. It sounds a bit silly by today's standards, but in 1974 it was probably the best thing that anyone ever came up with as a musical tribute to the new city, and also drums up a bit of nostalgia for those who were around back then for the new city's birth. 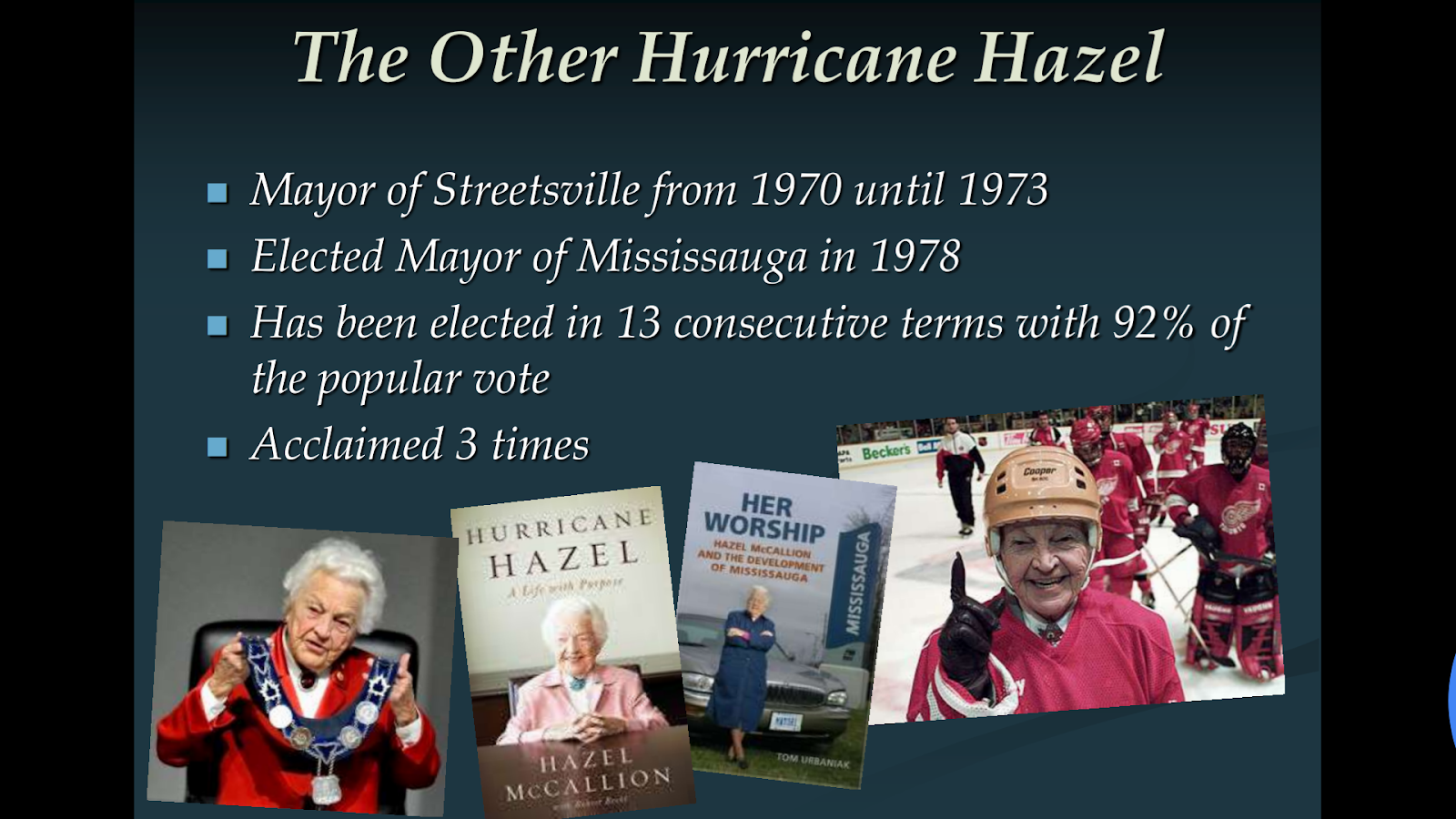 The first Hurricane Hazel was the massive storm that hit the area in 1954, and the second was of course the political storm that hit Mississauga in 1978 when Hazel became the mayor, staying in office for 36 years. There are currently two extensive books about Hazel's life and career. One is written by Hazel herself, and the other is the unofficial biography written by professor Tom Urbaniak, who once served on the Mayor's Youth Advisory Council (MYAC). While Urbaniak's 'Her Worship' offered perhaps the most balanced outlook on McCallion's career, according to Wilkinson she did not endorse its publication.

But there is actually a third book out there, called "The Ideal Candidate" by Benjamin Thornton, and it was written as a satirical account of a fictional city named, aptly,'Newhazel', which was also run by a fictional octogenarian mayor but the author included some other humorous exaggerations that makes it a good satiric read. 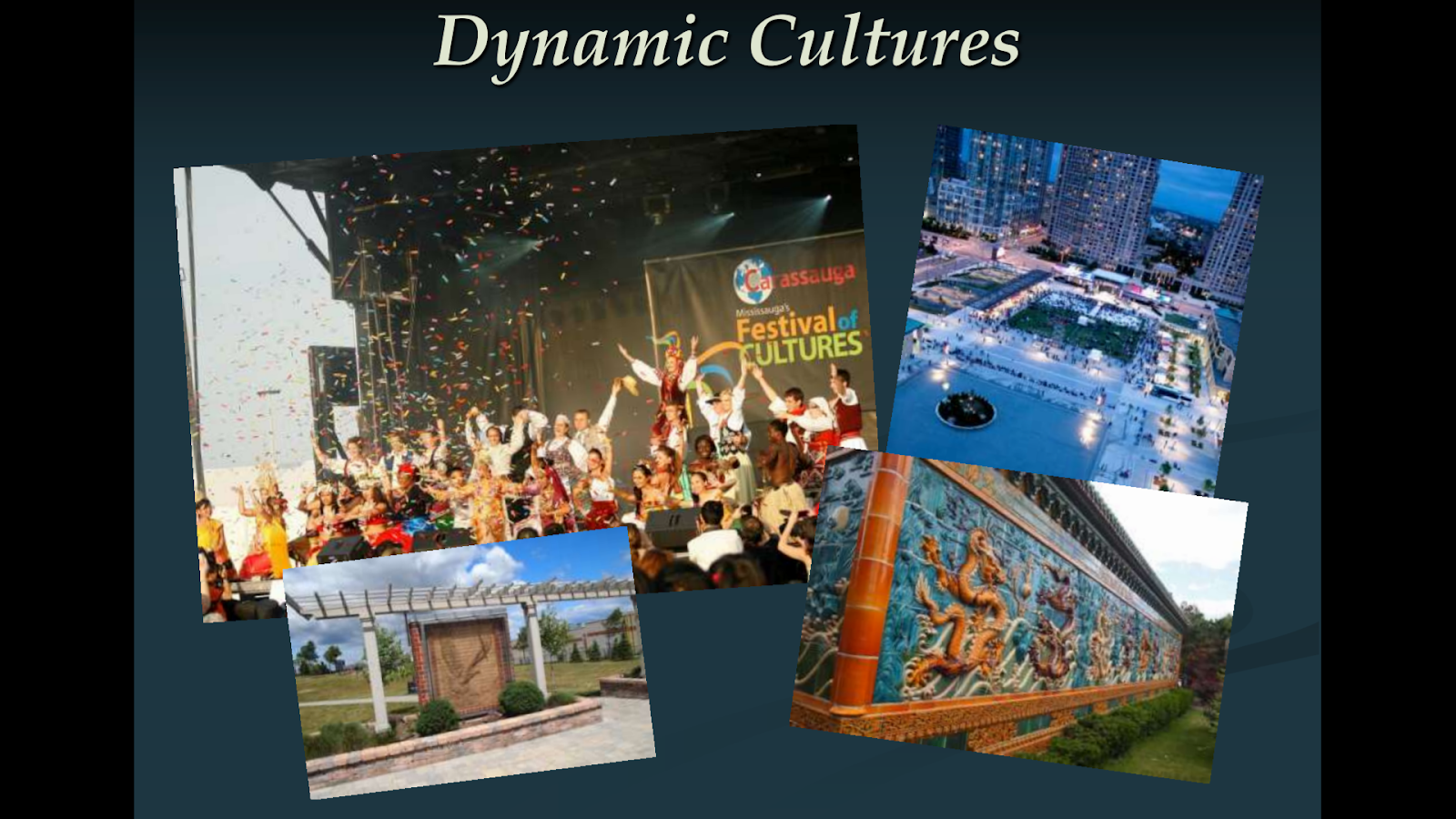 There are many stories about this place we call Mississauga that is not restricted within a 150 year time frame. If you take the time to peel back enough layers of the onion, there are many facets of history that lie beneath the concrete veneer of Mississauga today, which is being joined by new stories and new history as we welcome people from around the world to Canada's sixth largest city.