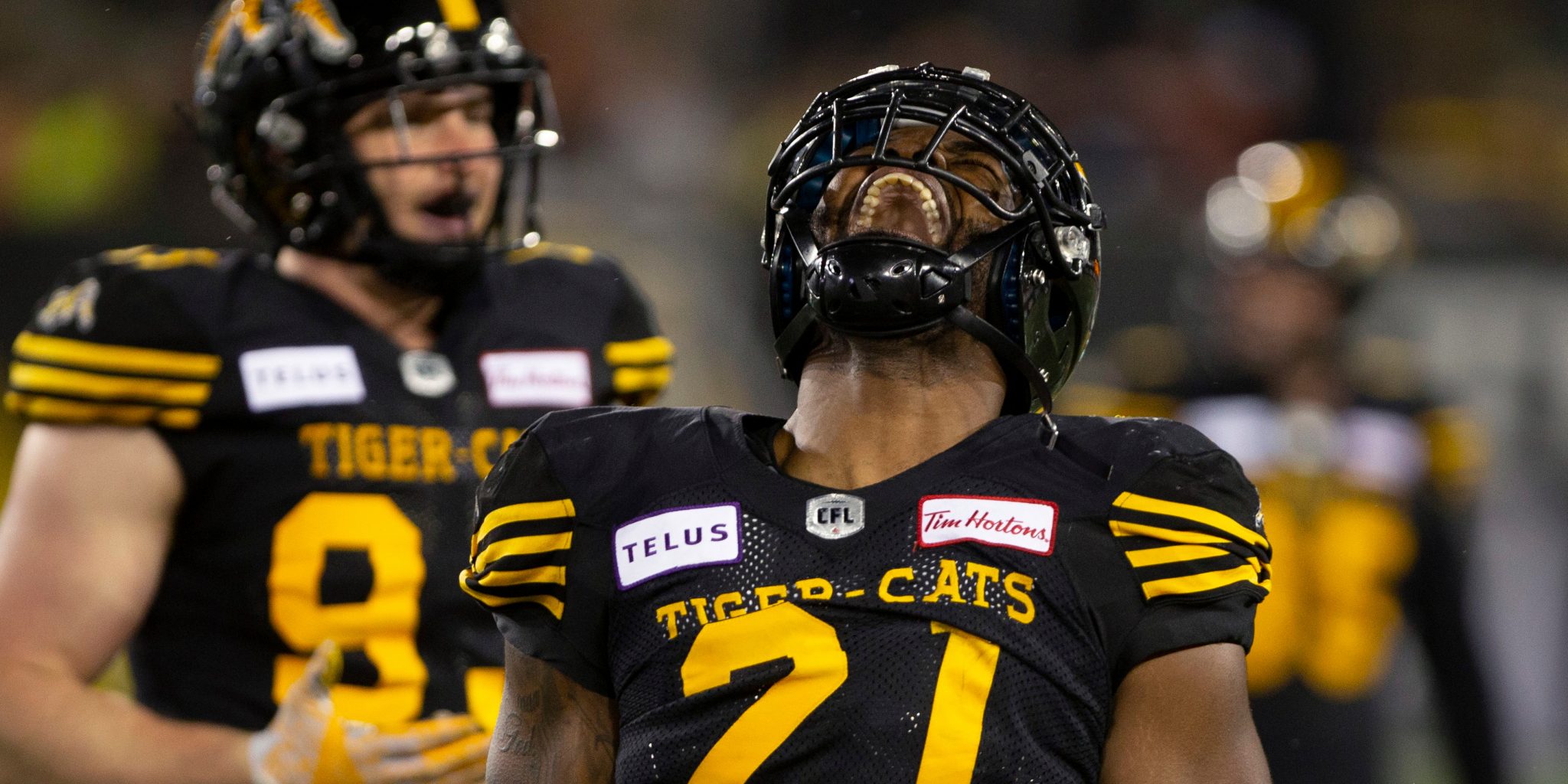 Linebacker Simoni Lawrence (pictured) is one of six Hamilton Tiger-Cats up for a CFL award. (THE CANADIAN PRESS/Peter Power)

Six Hamilton Tiger-Cats were selected as team representatives ahead of the 2021 CFL Awards, which will take place on Dec. 10 at the Hamilton Convention Centre as part of Grey Cup Week.

Lawrence, 32, was named Hamilton’s Most Outstanding Player for the first time in his career and added his fourth Most Outstanding Defensive Player nod with the Tiger-Cats (2014, 2015, 2019). With one game remaining in the 2021 regular season, the University of Minnesota product has started all 13 games at linebacker for the Tiger-Cats to date and ranks sixth in the CFL in defensive tackles (68), tied for fifth in interceptions (3), and shares the league-lead with two interception return touchdowns.

The 6-1, 231-pound native of Upper Darby, Pennsylvania already holds the Tiger-Cats’ franchise record with 597 career defensive tackles and is second in club history with 604 total tackles. He needs just three tackles to surpass current record-holder, Rob Hitchcock, who finished with 606 total tackles in his career as a Ticat. Lawrence also currently sits 17th in CFL history with 612 career defensive tackles.

Adeleke, 26, is a nominee for the CFL’s Most Outstanding Canadian for the first time in his career. The 5-10, 208-pound defensive back has started 11 games at safety for the Tiger-Cats in 2021, registering 43 defensive tackles, one quarterback sack, one interception and four pass knockdowns.

Adeleke, who was born in Lagos, Nigeria but grew up in Ottawa, Ontario, ranks third on the Tiger-Cats in defensive tackles this season despite missing two games due to injury.

Revenberg, 28, was named Hamilton’s Most Outstanding Offensive Lineman for the second time in his career, previously earning the honour in 2018 when he was an eventual finalist for the CFL award. The 6-4, 301-pound native of Essex, Ontario has started all 13 games at left guard for the Tiger-Cats so far this season.

Through five CFL seasons, the durable offensive lineman has yet to miss a game due to injury (regular season or playoffs) and was the Tiger-Cats’ Most Outstanding Canadian nominee in 2019.

Cross, 22, has appeared in 11 games for the Tiger-Cats so far in his rookie CFL season in 2021, registering two defensive tackles and 16 special teams tackles. His 16 special teams tackles ranks him tied for third in the league and just one behind second despite playing in two fewer games than anyone else in the top five in that category.

The 5-10, 210-pound native of Regina, Saskatchewan was selected out of the University of British Columbia by the Ticats in the first round, ninth overall, in the 2021 CFL Draft.

Lawrence, 26, has appeared in 10 games for the Tiger-Cats with five starts at boundary corner this season, posting 22 defensive tackles, three special teams tackles, one quarterback sack and two interceptions.

The 6-1, 185-pound native of Charlotte, North Carolina originally joined the Tiger-Cats as a free agent signing on February 17, 2021.

The award recipients were selected by voting members of the Football Reporters of Canada (FRC) and CFL head coaches. They will advance to the next stage of voting in the lead-up to the 2021 CFL Awards.

In this first ballot, voters were asked to select players from their local CFL club who, “through the excellence of their on-field performances,” best represent the awards’ titles.

For the first time since its inception, the CFL Awards will be free and open to the public. Seating will be limited and fans are invited to reserve their spots at greycupfestival.ca.