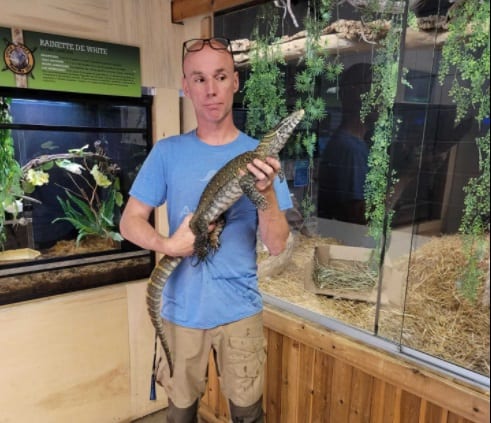 A big lizard is lost somewhere in Hamilton and there is a cash reward being offered for his safe return.

The owner of Little Ray’s Reptile Zoo and Nature Centre issued a plea over the weekend after one of the centre’s monitor lizards managed to escape the building, located in the plaza at Barton and Gage Streets.

“Although this animal possesses no threat to people or pets and will very much be nervous and avoid individuals and animals we believe we have a small window of opportunity to find and retrieve the lizard if indeed he is outside as we are very concerned for his welfare,” a Facebook post said.

If spotted, residents are urged to not try and apprehend the lizard.

“He is extremely fast and will need a proper plan to retrieve him and will be very much afraid and defensive and will almost certainly try to bite if someone is to grab him,” the post said.

A donation from a concerned citizen is funding a $200 reward for a confirmed sighting of the Nile Monitor which is estimated to be 3.5 feet in length and weighs three pounds, according to the post.

Residents in the area are asked to look under cars and up and trees while out and about.

“Please friends, if you live in the area, take a look around your property.”