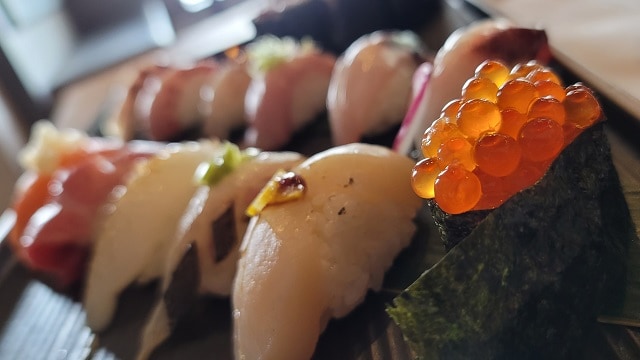 When it comes to Japanese food, sushi reigns supreme. Few other foods are as delicious, varied, and shareable, which makes sushi particularly good to enjoy with a group (but if you order a lot to eat for yourself, I won’t judge you).

Mississauga’s got a bunch of good sushi restaurants, although the quality definitely varies. Sushi restaurants that focus on AYCE tend to be quantity over quality, which is fine if you just want a lot to eat but usually not that great if you’re looking for fresh ingredients and a more authentic taste.

I’ve tried a bunch of sushi places in Mississauga before but had never tried Tomo Sushi — the popular Japanese restaurant located at Creditview and Burnhamthorpe — until now. Tomo is well known for their selection of fresh sushi and sashimi as well as their unique omakase menu, in which the chef presents a series of small plates and staples of Japanese cuisine for diners to choose from.

Having heard only good things about Tomo, I decided to try out one of their most popular dishes: the Sushi Deluxe (chef’s selection of 12 pieces of sushi and 6 pieces of maki).

The maki was Negi hamachi (a roll of flavourful hamachi fish and scallions) and each piece of sushi was a different kind, ranging from popular seafoods like sake (salmon) to uni (sea urchin) on soft, fluffy rice. The meal also comes with a small serving of soup, salad, and of course some tasty soy sauce and wasabi.

To start off, the six pieces of maki tasted fresh and delicious. Compared to the rest of the sushi they definitely had the most mild taste, but that’s not a bad thing — in fact, they made a great palette cleanser to help me appreciate the varied tastes of the sushi even more.

The twelve sushi pieces were each bursting with unique flavour. There’s something for everyone here; the tastes ranged from succulent (like the sake and suzuki) to sweet (the amaebi) to more bitter (the aji and ika) to sweet with a bitter aftertaste (the hotategai). My favourites were definitely the sake and uni — the latter of which had a really nice, creamy texture to it — but each piece tasted great in its own way, and the rice and fish tasted completely fresh and well-prepared throughout the whole meal.

The selection in the Sushi Deluxe is always different based on which of the freshest sushi the restaurant has available that day. Here’s what I got:

Tomo has some of the freshest sushi and maki of any restaurant I’ve tried in Mississauga, and you can tell they put in a lot of effort into making sure everything is high quality. As mentioned, one big thing that sets them apart from other Japanese restaurants is the authentic omakase experience. “Omakase” translates to “I’ll leave it to you” and has the chef customize a meal for you from various dishes that you get to pick.

If you’re looking for high-quality sushi and Japanese cuisine in Mississauga, Tomo Sushi is it — we believe they’re currently the best Japanese restaurant in the city, so if you haven’t tried them before we highly recommend it. If you love sushi and maki in a variety of flavours, then I would personally recommend getting the Sushi Deluxe.