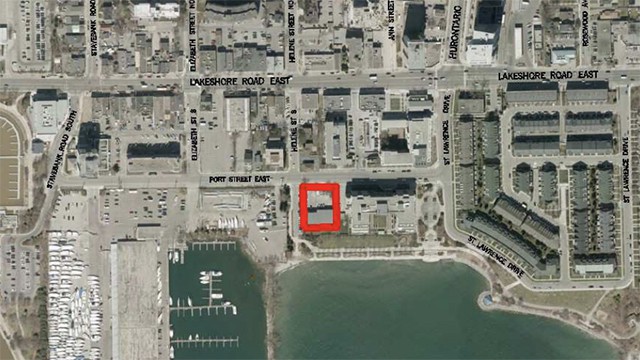 For some Mississauga residents, three additional storeys are too many–and something worth fighting against.

Despite a minor compromise from the developer, a group of residents is insisting that a recently-altered condo project should not proceed until the builder agrees to chop off a few more storeys.

And they’ve formed a coalition in order to bolster their views.

Back in February, a group of residents came forward to protest the possible construction of a “too tall” condominium development in Port Credit.

The condo, which has been proposed by the FRAM Building Group, was originally slated to feature 10-storeys, 34 units and one level of underground parking. If approved, the condo will take shape at 55 Port Street East.

The reaction to the application from some residents was swift, as the developer was asking for an exception to the zoning bylaw to permit a 10-storey structure in an area that, as of now, only permits buildings of six storeys or smaller.

And while it’s not yet clear what will happen to the application, it does appear that the developer is willing to compromise by taking away one storey and reducing the podium height on the building.

According to a Planning and Development Committee document, the developer agreed to a reduction in height from 10 storeys to nine storeys, an increase in the podium height along the westerly portion of the site from two storeys to three storeys, an increase in front yard setback to the portion of the building above the podium from approximately 7.0 m (23.0 ft.) to 9.0 m (29.5 ft.) and a decrease in provided parking from a total of 61 spaces to 60 spaces.

In the report, planning staff says the proposed development has been designed to be sensitive to the existing and planned character of the neighbourhood and fits within the overall context of the Port Credit community node.

“The proposed official plan amendment and rezoning applications are acceptable from a planning standpoint and should be approved,” the document reads.

Now, with a public meeting on the altered plan scheduled for Sept. 16, a group of residents has come together to issue a statement urging the city to refuse to permit a building over six storeys in the area.

“We are a group of concerned citizens living in the south Mississauga neighbourhood of Port Credit (Ward 1). Our Port St. E. neighbourhood consists of three condominium buildings and 130 townhomes adjacent to Port St.,” the release reads, adding that residents from the townhomes and buildings at 50, 70 and 80 Port St. E. comprise the Port St. Citizens’ Coalition–a group that has spoken out against the application in the past.

“With 300 individual homes and 450 Residents, we have united in our opposition to the proposed development located at 55 Port St. E.,” the release reads.

The coalition is opposed to the nine-storey development, claiming it will significantly alter the Mississauga waterfront and the neighbourhood.

At a recent public meeting, a slew of residents spoke about the development, with some supporting a taller building and others asking the city to cap its height at six storeys.

Those who spoke out against the increased height said that they purchased properties in Port Credit because they believed they would never be surrounded by buildings taller than six storeys. Many argued a nine or 10-storey building would deprive residents of lake views and sunlight, while others said they trust the developer–who is well known in the area–to do right by the neighbourhood.

The coalition says it plans to attend the Sept. 16 meeting to speak out against the development in its current form.