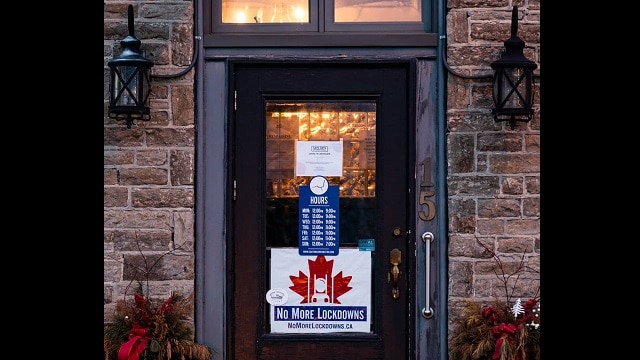 Ontario’s alcohol and gaming regulator says it has suspended the liquor licence of a Kemptville, Ont.,  restaurant after an anti-mask event was held on the premises during the province’s third COVID-19 lockdown.

The Alcohol and Gaming Commission of Ontario says it has issued an interim suspension to the South Branch Bistro for “reasons of public interest and safety,” as well as a notice of proposal to revoke the eatery’s liquor licence altogether.

The AGCO says its officials and members of the Ontario Provincial Police visited the restaurant during a scheduled event dubbed a “No More Lockdown” protest on Thursday.

A statement from the commission says patrons were consuming alcohol indoors, on the patio and in the surrounding parking lot, noting most present including staff were unmasked and not maintaining physical distance.

Upon returning to the restaurant on Friday, the AGCO says they saw its patio was still open for business and staff were not wearing masks.

Under the terms of a provincewide stay-at-home order that took effect on Thursday, restaurants are banned from offering in-person dining and can only provide takeout or delivery service.

“Those who hold a licence to sell alcohol are responsible for meeting their obligations under the (Liquor Licence Act) and to act with honesty and integrity,” the AGCO said in its statement.

Licence holders who do not meet the requirements of the LLA can face fines and see their liquor licence temporarily suspended or revoked.

The South Branch Bistro event on Thursday was held with support from Ontario legislator Randy Hillier, an independent MPP and vocal critic of the province’s lockdown measures.

“We were faced with two choices – stay open to feed our family, or close for good. We opted for the former than the latter.”