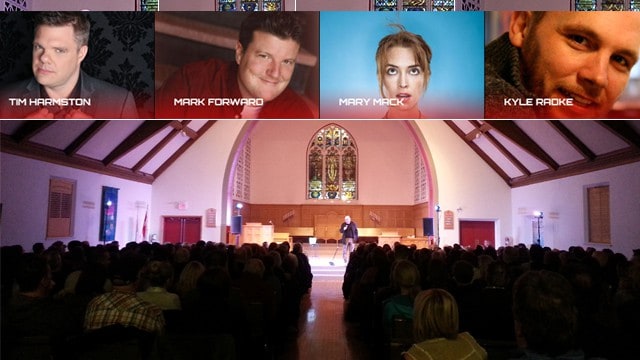 When Phil LeConte, the organizer of the long-running Kitchener-Waterloo Comedy Festival, took a gamble on Port Credit in 2013 by bringing a stand-up festival to Port Credit, he could only hope for the best.

And the best, it seems, has come to pass.

The third annual Port Credit Comedy Festival is set to return to the city-within-the-city this week, kicking off at the First United Church on Lakeshore on Thursday, Feb 26 at 8 pm and run through to Saturday.

The steadily growing festival that hits the mark with residents and visitors of almost all ages (their major demographic is people between 24-54) will feature a range of acclaimed stand-up comics and take place in both of its well-known (and ironically pious, in one case) stomping grounds.

The weekend performances at Clarke Memorial Hall will include routines by Mark Forward, Mary Mack and Kyle Radke.

If you want to head over to the First United Church, you can check out performances by Nathan MacIntosh, Jen Grant (Just for Laughs Festival, CBC’s The Debaters), Steve Dylan (Just for Laughs, Ha!ifax ComedyFest) and Dave Hemstad (Just for Laughs, three-time Canadian Comedy Award nominee).

The distinctly adult-oriented festival (there will be myriad — we hope, at least — sex and dick jokes told in church, so don’t bring the little ones or your devout grandparents) is branching out with a little something for parents who aren’t all that comfortable explaining sexual dysfunction to their pre-teens. Families can check out the Family Variety Show, sponsored by Theresa Baird Real Estate Broker, on Saturday, Feb 28 at 1 pm at Clarke Memorial Hall. The kid-friendly show will feature performances by John Park (Larry Sanders Show), Mike Wood (Mike Woods’ Catapulted Cabbage Catch) and Dan the One Man Band.

If you’re looking to enhance your laughter with a little taste of Port Credit cuisine, you’re in luck. The festival has partnered with The Shore Grill and Grotto and is offering festival ticket holders a special prix fixe menu that offers diners a choice of mixed greens, soup, chicken marsala, tilapia and a chef’s special dessert (and more). You can pair dinner with the opening gala for $72 a person or purchase a dinner and show package for Friday night for $54 a person.

As for prices, tickets for the opening gala cost $45 while passes for the weekend shows at both venues cost $26. The Family Variety Show offers $15 tickets for singles and a $50 flat rate if you purchase four tickets together.

So if you’re looking to infuse this ice cold season with a little light-hearted fare, show the growing festival — and your city — some love by telling the frigid winds that no amount of face-burning frost bite is going to keep you from laughing at penis jokes in a church. Don’t let the -̊200 temperatures win.