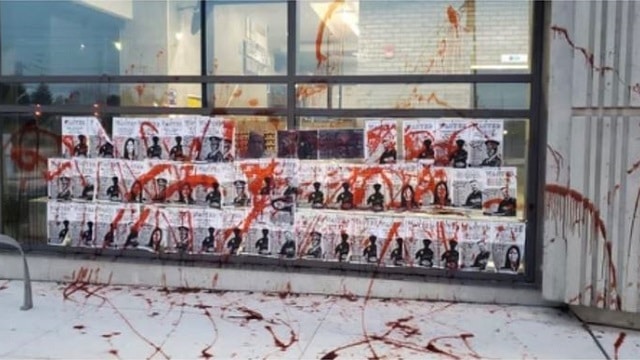 Police are seeking to identify and charge protestors who reportedly threw paint at a police facility during a recent protest in Mississauga.

The incident happened around 3:00 p.m. on Friday, December 11 at Peel Regional Police’s 11 Division, located at 3030 Erin Mills Parkway, in a protest calling for justice for those who have been killed or injured by Peel police, including Jamal Francique and D’Andre Campbell.

Police say they were aware that the protest would happen and had planned to allow it to happen peacefully.

During the protest, several attendees threw paint onto the facility and surrounding grounds, which police say caused significant damage to the building.

“The public has a right to gather peacefully to express their views on social issues that are important to them, and to us as a police service. When those peaceful gatherings turn violent, or result in the destruction of property we will absolutely take action,” said Chief of Police Nishan Duraiappah.

Duraiappah says any activities or actions that are abusive or harmful to officers will be “acted upon swiftly.”

“We are currently investigating the circumstances surrounding yesterday’s events and we are confident that we will identify and charge the persons responsible in the coming days,” he said.

The investigation is ongoing and police have asked anyone with information to contact them.

Numerous protests have been organized following the deaths of multiple people at the hands of Peel police, including Jamal Francique, a Mississauga man who was killed in January 2020, and D’Andre Campbell, a Brampton man killed a few months later in April.

Since then, the families of the victims have continued to call for justice and for the offending officers to be charged accordingly, and have met with city leaders to “apply pressure on elected representatives to take action against these violations of human rights and dignity.”

Editor’s note: This article has been updated to include more information about the protest in question.