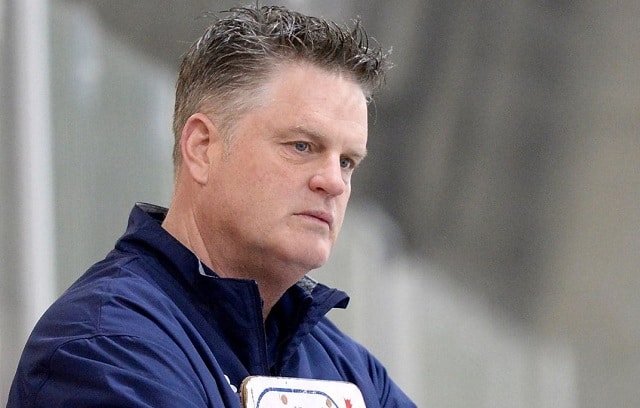 Ahead of guiding the Pickering Panthers in the national championship, Rob Pearson has been recognized as the Canadian Junior Hockey League coach of the year.

The CJHL, the parent organization for all Junior A hockey leagues across Canada, announced Tuesday that the 51-year-old Oshawa native is the recipient of ​​the Darcy Haugan-Mark Cross Memorial Award. The honour is presented by the CJHL and the National Hockey League Coaches’ Association.

The Panthers won the Buckland Cup, the Ontario league title, in a seven-game championship series that was capped off by a comeback victory in the winner-take-all Game 7 on Sunday. Under Pearson, who is in his second year as Pickering’s bench boss, the Panthers also had a .759 point percentage during the regular season.

Pickering faces the Red Lake Miners on Thursday in their first round-robin game at the Centennial Cup. The 10-team touranment in Estevan, Sask., decides the top team at the Junior A level.

Pearson, whose 10-year pro playing career included time with the Toronto Maple Leafs, has come to appreciate how the OJHL offers a chance to mentor players who have a myriad of hockey aspirations. Players in CJHL member leagues, unlike the Ontario Hockey League, are eligible for U.S. college scholarships. But some have also played in the OHL and pivoting to play Canadian university hockey or minor pro.

“They’ll go through large bumps through the season and you have to help guide them through those issues,” Pearson said in a statement on the OJHL website. “I know, I had a lot of issues through my playing time. You have to take the good and bad from them and tell them to keep striving: ‘It’s not anyone else’s goal, it’s your goal. And see if you can reach it.’ ”

“It’s more than just the game on the ice. Kids are so smart these days. They know so much about the game. It’s now about working with them mentally off the ice so they can bring their A game onto the ice.”

Pearson previously coached in Ontario University Athletics with the Ontario Tech Ridgebacks, and also coached with youth and OJHL teams in Whitby. He came aboard in Pickering after team governor-president Richard Pilosof reached out early in the 2019-20 season.

“It’s been nothing but first class here,” Pearson said. “Richard has done an amazing job and I’m pretty proud to have been part of this organization and see how well it’s gone in the last three years. Even through the ups and downs of COVID, It’s still been fantastic.”

The award is named after the two coaches of the Humboldt Broncos who were among those who lost their lives in a crash near Tisdale, Sask., on April 6, 2018. Cross played his Junior A hockey in Estevan, the host of the Centennial Cup.