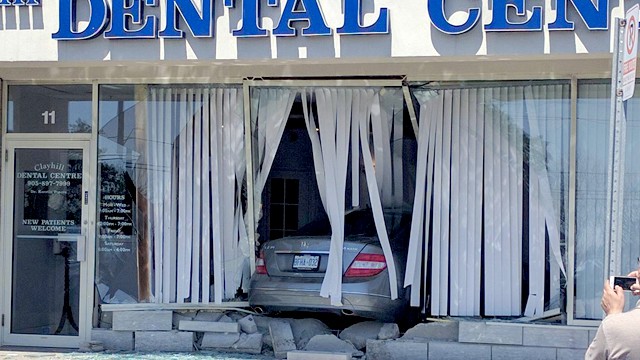 Either somebody had an accident, or they really didn’t want to miss their dentist’s appointment.

Around noon on Sunday, a driver crashed their car into the front of a dental office on Clayhill Road.

The front window of Clayhill Dental Centre, as well as the area around it, was reduced to a mess of rubble. Nearby witnesses gathered to look at the scene and take pictures, while officers arrived shortly after to rope off the area.

Although receptionists are still working in the office, the dental centre is currently closed to the public. The car has since been removed from where it was lodged in the front of the building, but it can be seen in some photos taken after the incident.

It’s unknown when exactly the office will be reopening. It also isn’t clear what caused the crash or what the current state is of the person who was driving the vehicle.

Let’s just hope they aren’t hurt and that the office makes a speedy recovery, at least for the sake of its patients.

UPDATE: The Clayhill Dental Centre has reopened as of today, July 19.