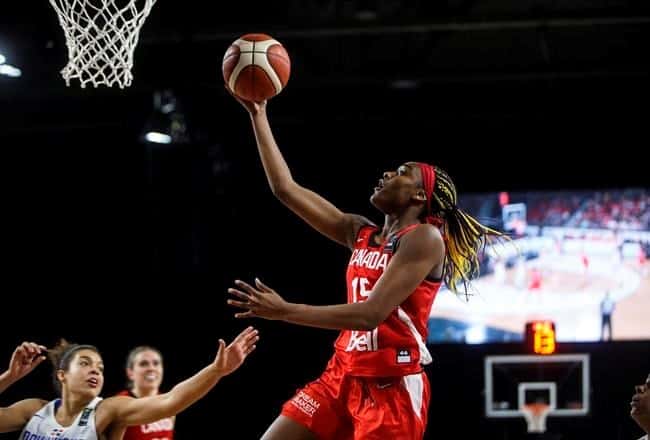 TORONTO — Phillipina Kyei has put on a Canadian shirt for numerous national team practices the past few years, but the fit never felt quite so right as it did Tuesday night.

Just a day after Kyei became a Canadian citizen, the six-foot-eight centre from Ghana made her national team debut, starting for Canada’s under-23 women’s team in a 65-53 victory over Belgium at the inaugural GloblJam tournament.

“Definitely (the jersey felt different),” Kyei said with a wide smile. “The only reason stopping me from making the team was my citizenship. I just got that yesterday, played a game today. So, two (pieces of) good news.”

Aaliyah Edwards led Canada with 22 points and 10 rebounds, while Shayeann Day-Wilson had 18 and Pickering’s Shaina Pellington chipped in with 13.

The 18-year-old Kyei had four rebounds and an assist in her 10 minutes of action.

Kyei — which is pronounced Chay — and her family moved from Ghana to Canada about four-and-a-half years ago, settling in Calgary. She’d loved playing soccer and running as a kid, but her height caught the attention of the high school basketball coach and so she went out for her Grade 9 team.

“I didn’t know anything about basketball. It started off not so great, I struggled a lot. The rules were so much for me,” she said.

“That’s where we realized, wow, we’ve got to invest in her,” said Denise Dignard, Canada Basketball’s women’s high performance director.

Dignard doesn’t believe Canada has ever had a six-foot-eight women’s player. She also moves with remarkable athleticism and fluidity for her size.

Kyei, whose teammates call her “Philly,” became a Canadian citizen via Zoom on Monday, seated in front of a laptop in the team hotel ballroom, a Canadian flag draped around her shoulders. She had to recite the Oath of Canadian Citizenship, and sing “O Canada.” Her coaches sang along.

“They were there to help me in case I messed up,” Kyei said with a laugh.

Her teammates and coaches presented her with balloons and flowers, and after living in limbo without a national team to play for, she said the traditional team jersey ceremonial handout was special.

“I remember crying when I couldn’t make the team (because of her citizenship status),” she said. “I was really sad. I used to watch the game, they would post stories about it. I was like, wow, I wish that was me.

“This year, finally, after all the years I’ve been playing … I got my citizenship. And I made the team.”

Kyei is one year into her college career at the University of Oregon — she’s the tallest female player in Ducks history. She averaged 3.7 points and 3.3 rebounds in 8.6 minutes off the bench, shooting 51.9 per cent from the field and blocking 15 shots.

Canada, meanwhile, trailed Belgium 20-13 after the first quarter at Mattamy Athletic Centre, but took a 32-29 advantage into halftime. The Canadians led 48-44 with one quarter left.

The men’s team tipped off their tournament against Brazil in Tuesday’s late game.

The new FIBA-sanctioned tournament is intended to help bridge the gap between international U19 action and the senior programs.

This report by The Canadian Press was first published July 5, 2022.