It looks like Peel Regional Chair Nando Iannicca will get off scot free after all.

A report from the region's Integrity Commissioner found that Iannicca did not violate the code of conduct during the recent brouhaha over the province's regional government review.

The ruling was in response to an official complaint filed by Mississauga Councillor Carolyn Parrish towards Iannicca on May 22. 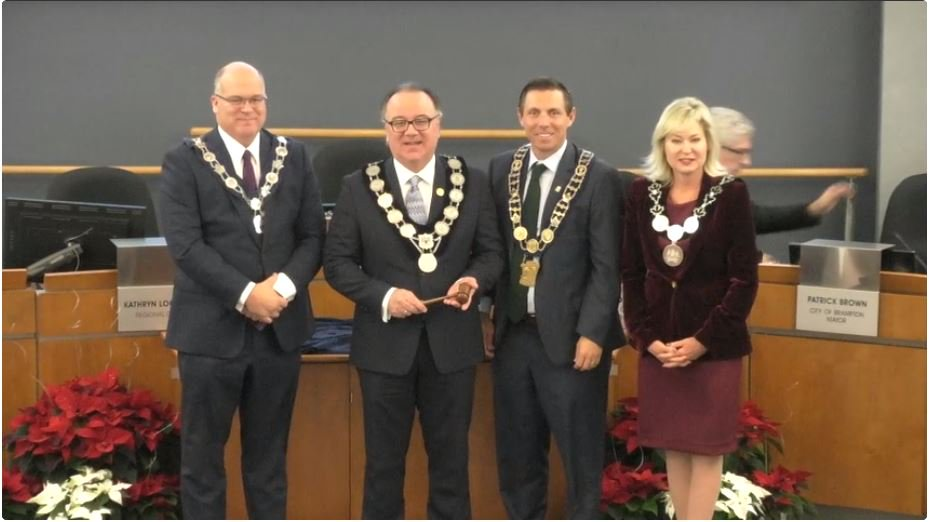 The Ford government launched the review last year for a number of regional governments in order to find 'efficiencies'. Mississauga's councillors were hopeful that Ford would conclude that granting the city independence from Peel Region would be a reasonable way to go.

During the review, various stakeholders from the public to elected officials offered their opinions. Two reports were issued: one from Deloitte and the other from Ernst and Young, totalling close to $1 million but offering what were deemed contradictory positions on the region's future.

Parrish's complaint stems from the following:

After much contention, Regional Council approved the second Ernst and Young report at a cost of $660,000, which found results much more favourable to Mississauga's position that leaving the region would save them money.

But in the end, the province ended up doing nothing, deciding to keep the status quo and the region's Integrity Commissioner ruled that Iannicca did not violate the code of conduct.

According to the IC report, because Regional Council technically did not have a position on the review, Iannicca could not have 'communicated a position that was contrary to Regional Council’s decision,' because there was no position to contradict. They also concluded that staff had initiated the Deloitte report, not Iannicca, who was only told about it after the process had been started by staff.

Not that he tried to absolve himself of responsibility.

"I am the Chair and CEO (of Peel Region) and I am fully responsible and accountable for the decision and happy to be judged accordingly. We're not going to throw staff under the bus. They did their job, they spoke with me and I made the decision and I alone," Iannicca told council on April 25.

But the report also noted some 'misleading characterizations', such as the report being submitted 'on behalf of the Region of Peel,' which is a contradiction as Parrish's assertion that it was not a position approved by council, and how Iannicca kept all these details from councillors up until the last minute.

"It is clear from the confidentiality provisions in the procurement documents, and from emails among staff, that great care was taken to ensure the work being undertaken was kept under wraps. The Chair's participation in that secrecy, his collaboration with senior staff in keeping Council from knowing right up until the March 28 meeting, reflects poorly on the Chair."

The report added that providing Brown with the report and to no one else reflected poorly on Iannicca as well.

“I disagree strongly with their ultimate conclusion that 'the Chair did not breach the CoC, but I do agree with 'the behaviour engaged in by the Chair raises concerns about his handling of the situation and fails to meet the standards of transparency, accountability and ethical conduct expected by the community and by his fellow members of Council who have appointed him to the role,” Parrish said in an email to insauga.com.

“You may clear him (Iannicca) through a technicality. Nonetheless, I find the behaviour was lacking and you yourself point out to a lack of transparency, accountability and a lack of ethical conduct that occurred,” Mississauga Mayor Bonnie Crombie said to the IC during the regional council meeting on November 14, saying that Iannicca should have been aware of the procedural bylaw during the last two times it came up in the last 22 years..since he was on council during that time.

We've already explored how badly Mayor Crombie and Coun. Parrish, and frankly the other Mississauga councillors, have handled their campaign to get the city out of Peel Region. But it appears that Iannicca has demonstrated a blatant level of hypocrisy, even for those most cynical of political operators.

For decades Iannicca, who served as Ward 7 councillor, sat right beside Hazel McCallion, Parrish and Crombie and joined in the calls against the regional government and how the framework unfairly disadvantages Mississauga.

Iannicca would often quip about how his entire ward, with some 100,000 plus residents, had more population than all of Caledon. But as soon as he took a new lofty perch as Peel Regional Chair, along with the six-figure salary and additional benefits, the man very quickly changed his tune.

Suddenly it seemed like the Region of Peel was a good thing to keep around after all.

How surprised must Iannicca have been when a video of his past performances around Mississauga council chambers supporting separation was played at a recent meeting, on the projector screen just over his head as he was forced to watch his past self in action.

It's almost like he didn't realize that all these years he was being recorded on video!

Taking advantage of the financial perks is nothing new to the Chair. When he was a Mississauga city councillor, Iannicca took a number of trips to places as far as Miami, Hawaii, Rome and Venice. A few years ago, he claimed almost $10,000 in expenses for these trips, for obscure conferences such as the International Institute of Social and Economic Sciences (IISES) in Miami and the World Conservation Conference.

To this day, not many people can rationally explain why he went there. But as far as I know, everyone can agree that those destinations are ideal vacation spots any time of the year.

Moreover, with Mississauga leaving Peel and essentially dissolving the region, Iannicca himself would be out of a job and all those lovely perks would be gone—if he didn't do everything within his power to maintain the status quo.

For now, his plan has worked. But with Mississauga councillors recently announcing they were going to be more aggressive in scrutinizing the region's activities, expect more fireworks on the way.

Who would have thought Peel Regional Council meetings could be that fun to watch?