Peel not in second wave but situation can change “at any moment”: Mayor Crombie 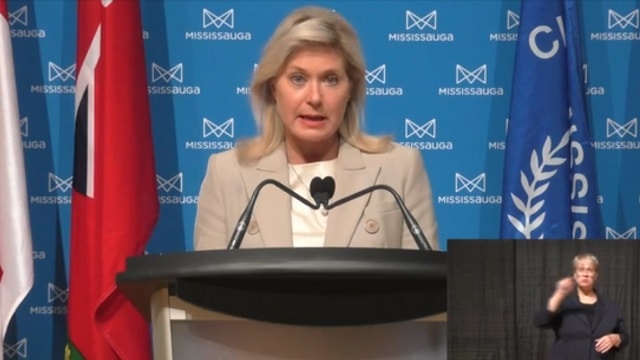 It’s been a bad start to the week for the province, Mayor Bonnie Crombie said today in the city’s weekly COVID-19 update.

In addition to reporting 625 new cases today, the province released its latest modelling numbers, projecting that Ontario could see more than 1,000 new cases per day by the first half of October.

The mayor says the GTA continues to be the most impacted, accounting for roughly three quarters of all cases.

“This is concerning,” Crombie said. “We’re keeping an eye on what is happening in our neighbouring cities like Toronto, and we’re acutely aware of our proximity and the impact that any changes in Toronto or Brampton might have here in Mississauga.”

Peel Region is averaging 75 to 100 cases a day, with an average of 28 a day in Mississauga over the last week — numbers considerably higher than what we saw in the summer, but averages holding relatively steady over the past month.

“We’re not seeing a massive surge in cases right now. This means we are not yet experiencing a second wave here in Peel,” said Crombie. “But we know this can change at any moment.”

The mayor continued to appeal to residents and businesses to do what they can to reduce a second wave of COVID-19, including avoiding unnecessary social gatherings and shrinking social circles to only the most necessary people in one’s life.

In contrast to last week where bylaw officers issued more than a dozen tickets over the weekend to restaurants, bars, lounges and individuals who reportedly ignored the provincial and municipal limits for social gatherings, only one ticket was issued this past weekend to the promoters of a drive-in concert, with a total of seven over the past week.

Peel’s Medical Officer of Health Dr. Lawrence Loh echoed the sentiment that, while we’re not yet seeing a second wave, it could still happen here if we aren’t vigilant.

“Since Labour Day, we have kept our new daily cases on a slow linear burn in Peel, and we are able through our investigations to determine the exposure source in 85 to 90 per cent of the transmissions in our community,” said Loh.

“This means we’re not quite seeing a second wave picture here in Peel yet — but the operative word is ‘yet,'” he added, noting that the overall provincial picture is trending towards a resurgence.

Loh reports that as of this afternoon, Peel Public Health has investigated 3,707 cases of COVID-19 in Mississauga. Of these, 287 are active, 3,189 have recovered, and 231 residents have passed away.

In the past week, Mayor Crombie says the city has seen cases linked to weddings and social functions at banquet halls, small get-togethers with family and friends, and at places of worship.

Crombie says she spoke with Premier Doug Ford this morning regarding further measures that can be taken regarding social gatherings, particularly at banquet halls, and is also urging the province to expand the number of pharmacies offering testing and ensure they have the capacity to conduct more testing.

Each location is processing roughly 50 tests a day by appointment.

The mayor reminded residents returning from travel abroad to adhere to the mandatory quarantine order of 14 days, and said failure to do so could result in major penalties — fines of up to $750,000 or potential jail time.