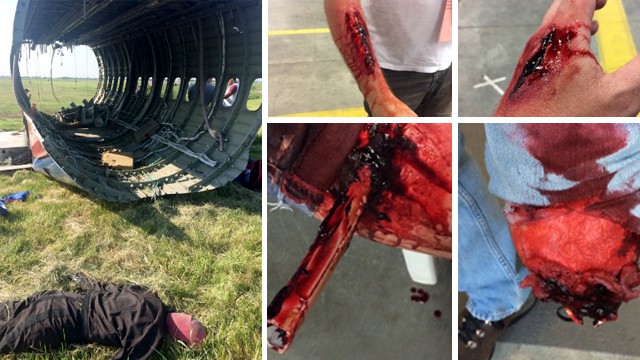 A devastating plane crash with many wounded victims calling for help… It’d make for quite a horrific story, if it weren’t all fake.

Pearson International Airport executed a fake plane crash on Saturday morning as a training exercise to test the skills of 500 emergency responders.

The exercise, which ran from 9 a.m. to 6 p.m., has been planned for about a year, according to Greater Toronto Airports Authority (GTAA) spokesperson Shabeen Hanifa.

“We’re Canada’s largest airport and we want to make sure the people who work here, whether it’s in the GTAA or all of our external stakeholders, are well prepared for any scenario at any given moment,” Hanifa said.

With about 400 people from the general public volunteering to act as crash victims and concerned family members of the passengers, a total of almost 1,000 people took part in an extensively organized simulation meant to prepare emergency responders for the event of an actual plane crash.

“Every person that’s playing is playing as if this is a real-life situation,” said Hanifa, hinting at how much effort and planning went into the exercise. “This will actually be our biggest one so far.”

The exercise’s scenario depicted a plane-destroying crash short of the Pearson runway, injuring many of the passengers on the fictional flight European Airlines 000.

Make up artists were on hand to turn the civilian volunteers into distressed victims suffering from a variety of realistic-looking injuries – everything from bloody leg wounds to extreme head trauma.

One such volunteer was Troy Matthews, who arrived at the airport at 4 a.m. for his make up. The artists spent the better part of the morning affixing a large piece of glass to the side of his skull.

“There are a lot of people here with things protruding from their head,” he said.

Hanifa explained that the wounds are important to reflect the grim reality of a plane crash and help emergency workers make the right calls when they encounter these situations in real life.

“If you make a mistake today, you can make it in safe environment,” she said. “And then when something like this happens in real life, you can be ready for it.”

Other special effects included smoke from the crash and large, scattered pieces of the destroyed plane.

The exercise seems to have been a success overall, although ironically not as harmless as it was supposed to be – paramedics had to take a break halfway through to treat volunteers who were suffering from the hot (30 degrees Celsius) weather. Four had to be taken to the hospital for heat-related ailments.

Thank you to all of the volunteers participating in our Emergency Exercise today. #YYZEmergEx #SafetyFirst pic.twitter.com/E1aTMNv3Rv

THIS IS AN EXERCISE. The view from the airfield this morning as our Emergency Exercise gets underway. #YYZEmergEx pic.twitter.com/WsihX3l5cR