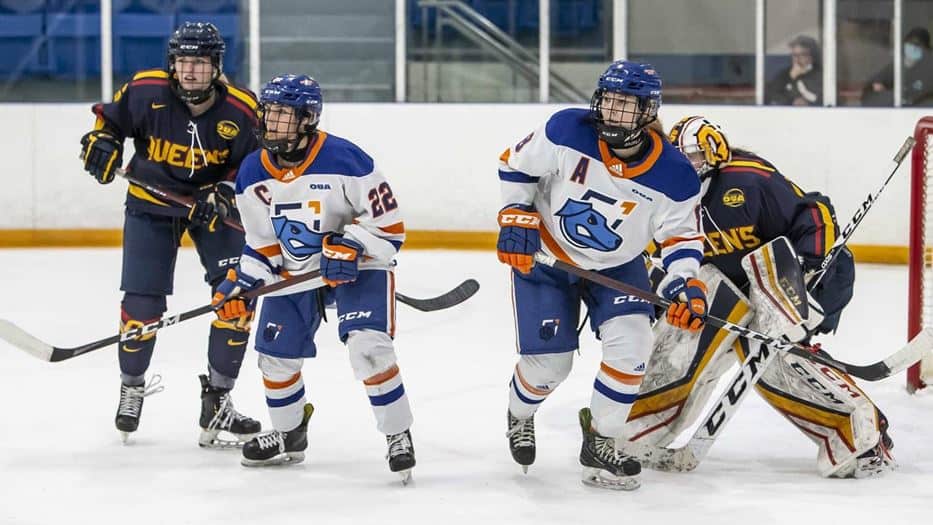 It was a mixed bag of results for Ontario Tech varsity squads in hockey and basketball last week, with the two hockey teams splitting a quartet of games and the basketball sides continuing to learn some hard lessons from top ranked schools.

The men’s hockey team dropped a 5-1 decision to Queens University Saturday, thanks to a hattrick from Joshua Curtis of the Gaels, but won the previous night against the Nipissing Lakers, 3-0, with Leif Hertz earning his first OUA shutout.

The women’s team also split their games, with both games against Queens. It was double shutout Friday when Zoe McGee turned aside 23 shots to give the Ridgebacks a 1-0 win – the first time OTU goaltenders recorded two zeros on the same day.

Queens won the rematch the following day, 3-1. Erin Ross took care of the scoring for the Ridgebacks in both games.

Hertz and McGee were named as Ontario Tech Athletes of the Week for their efforts.

On the court the two basketball sides didn’t fare as well, with the women’s team losing 61-49 to the nationally ranked Ryerson Rams Saturday, following a 78-38 thrashing the night before to fall to 1-10 on the season.

The teams will resume the second half of the schedule in January.