'Over Scrutinized,' says Mississauga Candidate on How She Got Kicked Off Ballot for Municipal Election

We might have an exciting mayor's race in Brampton and two Mississauga wards with no incumbents, but that doesn't mean some other parts of Mississauga aren't seeing some political intrigue leading up to the October municipal election.

Carolyn Parrish, the Ward 5 incumbent councillor who was recently disciplined after making a racially-insensitive comment about how a police officer at Peel Region was promoted for being 'black and female', is running for re-election in the October municipal election. The deadline to register as a candidate was Friday, July 27 at 2 pm. 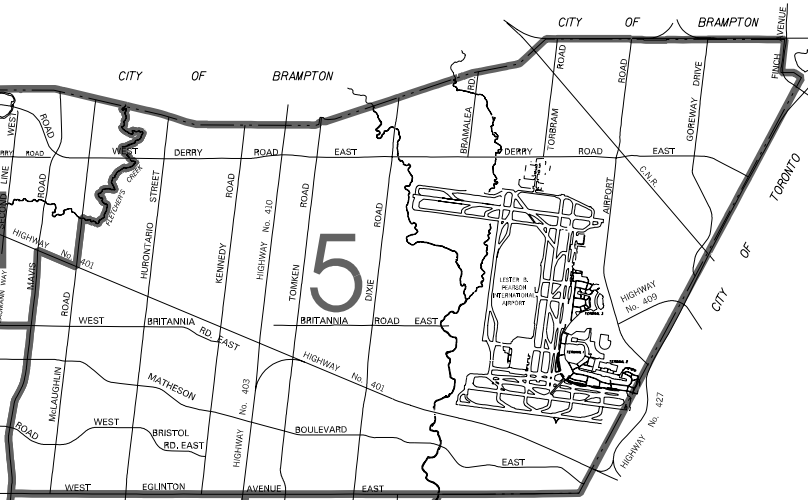 It looked as though a significant challenger emerged last week, as a prospective candidate named Nikki Clarke registered to run for councillor in Ward 5 as well. Clarke, a media personality and self described Malton activist, was the NDP candidate in Mississauga Malton during the provincial election, coming in a strong second to the eventual PC winner, Deepak Anand.

Clarke registered last week and her name appeared as a candidate for Ward 5 councillor. But on Monday July 30, Clarke received an email from Diana Rusnov, Mississauga's city clerk, advising her that she was being removed from the ballot because of certain irregularities in the signatures on her nomination forms.

As seen on the email's time stamp, Clarke was given about three hours to go find the eight people who apparently miswrote their addresses and postal codes, have them verify their identities in writing, and return them by 4:00 pm.

It would have been a good idea to get more than 25 signatures as a backup in case this happened, but when insauga.com got a call back from Clarke, she said she only decided to run in the last few days when people came to her asking her to run. She said the signatures she got were all valid Malton addresses, such as members of her church, so she ended up getting only 25.

What makes this story rather interesting is some suggested involvement by Parrish to get Clarke, who was only a first time political candidate a few months ago, off the ballot. The issue was first brought to light by freelance writer Andray Domise, who provided this Twitter thread outlining Clarke's version of events (Clarke later verified his version of events on the call).

One of the signatories to Clarke's nomination papers was Catherine Soplet, who is also a candidate for school trustee in Wards 1 and 7. She posted a series of messages Parrish sent her last Saturday, one day after Clarke registered, asking her to clarify her maiden name. 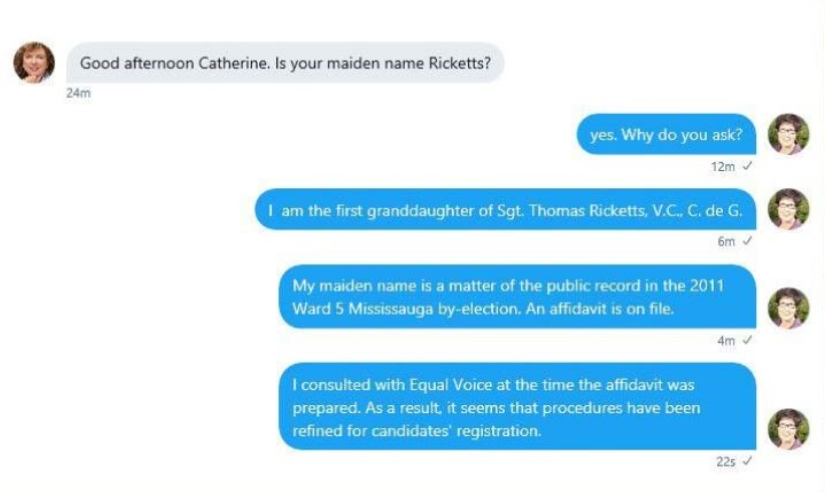 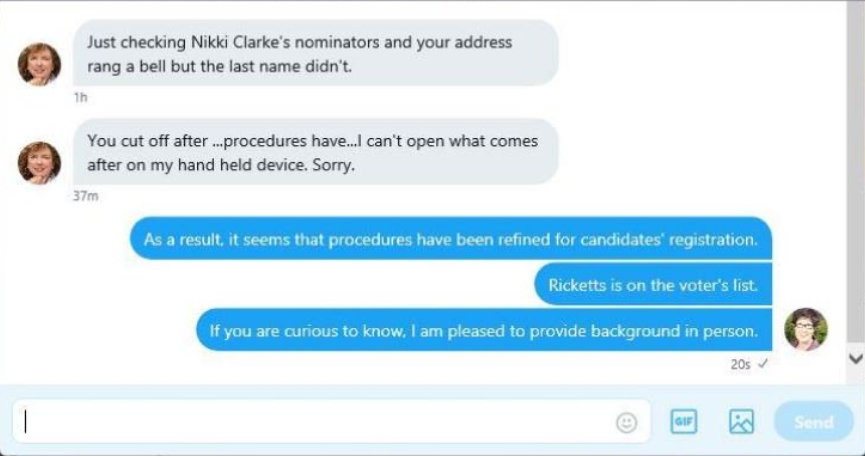 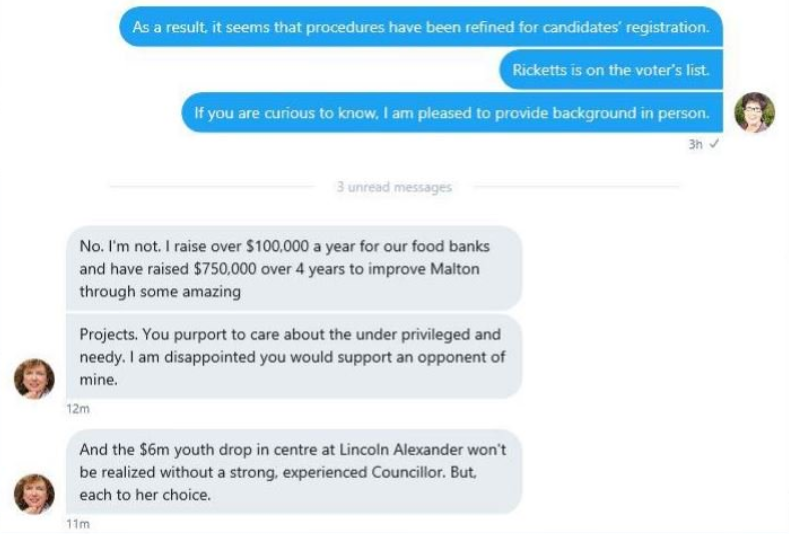 In the thread, Domise alleges that Parrish may have been scrutinizing the nomination forms of an opponent running against her. In addition, the discrepancies the city clerk found were things like incorrect postal codes, and a few street names where the addresses were written down incorrectly.

But spelling your street name wrong is a common error that can easily be rectified, by even a Google search or calling that person. Clarke said some of the people who signed her papers had disabilities, such as dyslexia, and couldn't spell properly.

Soplet managed to get down to the city clerk's office to prove her identity by showing them her driver's license and verifying her surname. But the other people with discrepancies were not able to do so.

Clarke then said she asked the city if she could have 24 hours to approach each individual that couldn't be reached to personally collect affidavits to rectify the situation. She received no response from anyone at the city. The city then removed Clarke's name as a candidate: 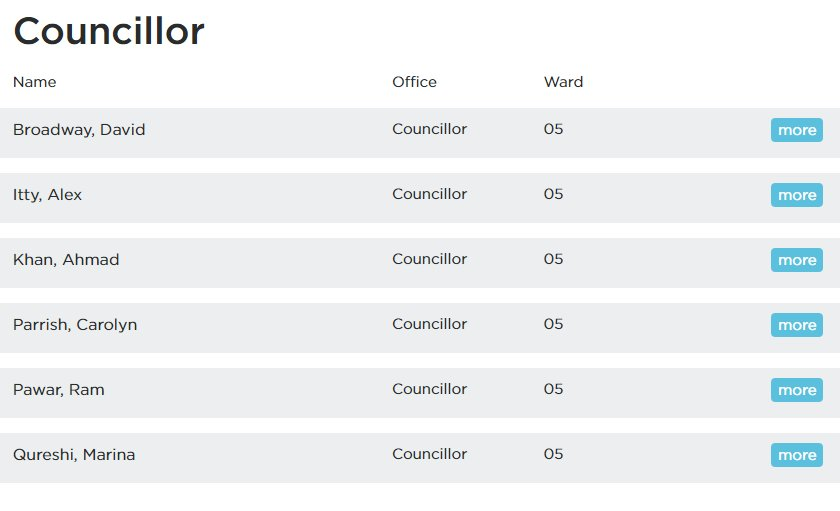 Clarke ended our phone conversation saying she would be looking into this matter to see if there were alternative solutions. But she has alleged that the city "overscruitinized" her nomination forms on behalf of a sitting councillor.

Rusnov also left this voicemail, but the clerk forgot to hang up and she could be heard saying, "oh fun times; this has never happened before." In an email to insauga.com, city staff responded that this was the first election that required the submission of endorsements in a nomination form, hence the comment that this had never happened before.

"The Municipal Elections Act states that ther clerk must be satisfied that any candidate is eligible to run in order to certify their nomination, while using discretion to review any and all parts of a nomination package submitted by a candidate. The city does not maintain a record of the number of complaints received or by whom during the campaign period," concludes the city's email.

While Clarke and Domise allege that there were racial motivations within the machinations that unfolded, Parrish had a different take that focused more on following the rules and being prepared.

In an email to insauga.com, the councillor said while it was standard practice of councillors' staff to check out the city clerk's office on the last day of registration, it was not standard of a candidate to come in on the last day and ask to get additional information last minute.

"(Clarke) came running out of the office smack into my executive assistant, Danny (Singh), and she asked him to sign her papers because she was short on two nominators, of which he said no."

Singh was indeed down around the clerk's office, as I was there all day covering the day's events. Clarke did also ask other staff to sign them, not knowing city staff are not allowed to sign nomination forms for candidates for council.

Parrish also touted her experience versus what she called Clarke's "rookie mistake."

"An experienced candidate knows this and exercises the privilege when a chaotic last minute candidate announces a need for two nominators five minutes before the door closes and magically ‘finds’ them in City Hall where no staff is allowed to sign such documents."

"This process is open to all candidates, incumbents and challengers. The nominating documents are legal affidavits and the process is there so all candidates apply honestly and accurately. The job of Councillor is a significant one and the onus is on all candidates to start with clean, carefully prepared nomination papers. Most, including myself, put an extra 10 in case there are any inadvertent errors."

We then asked Parrish, in light of the recent controversy she was involved in with Deputy Chief Ingrid Berkeley-Brown, how she felt about the optics of what some were suggesting was the targeted removal of a challenger who, yes, is black and female, and whether her actions were racially motivated.

"Any implication that I targeted Ms. Clarke's nomination because she is black is entirely incorrect. There was no other reason other than the disorganized, almost chaotic behaviour of the candidate in the eleventh hour and the random approach of my assistant were the reasons for my inquiry," Parrish added in another email.

We then asked Parrish if she actually saw Clarke as a significant threat to her reelection. The councillor responded with a list touting her accomplishments while in office, such as raising $720,000 from the private sector for Malton projects and stopping the widening of McLaughlin Road, and said she was confident she would be re-elected to continue her work making Britannia Farms an education centre / community park, and the Malton Youth Hub.

"I stand on a 33-year career. My record speaks for itself, and my constituents know the attempt by a colleague to label me a racist was rejected by the rest of my colleagues. My passionate defense of Malton’s police station resulted in an unfortunate comment for which I've profusely apologized for."

Parrish is right: the job of councillor is a significant one. In a city of almost 800,000 people, only 12 individuals are elected to serve in city council in Mississauga.

But this has come down to a strict adherence to the rules on the books versus real life circumstances. If what Clarke said is true, some people who may have spelled their street name incorrectly shouldn't be faulted for doing so, if the error is a minor one such as spelling "Morning Star" as one word instead of separate words.

It seems a bit of a reach to argue that no resident could ever make such a mistake. Do even newly arrived residents of Malton need to know immediately that 'Morning Star' is one not word once they move into the neighbourhood?

However, there are certain cases that merit what Parrish said about ‘true Malton residents.’ She referred to one nominator on Clarke’s forms, a Crystal Mark who supposedly lived in Malton. Parrish says she later found out Mark has been living in Hamilton for the past two years. The councillor checked Mark’s Twitter feed as she was tweeting criticism of the clerk’s decision and discovered that fact.

The accusations of racism on Parrish's part aside, the optics still aren’t great—especially since the candidate who was disqualified is an up and coming one who isn’t quite as seasoned. True, the rules should be followed for those who seek public office, but perhaps more ample time should be given for candidates who need to rectify the mistakes they have made. Giving someone three hours in the middle of a work day does not seem reasonable.

Perhaps nomination forms should be carefully reviewed immediately rather than right before deadline? Should city staff look over the procedures and decide whether some leniency could be applied in certain cases? Instances like this might prompt some voters to question whether or not Mississauga City Hall is something of an Old Boys/Girls Club.

My one suggestion for now is that in the future, the candidates package should specify that while the 25 signatories are the minimum required, that they should be encouraged to find more than 25 in order to avoid something like this from happening again.

New Jamaican patties take-out spot is now open in Square One in Mississauga
There’s nothing like getting a whiff of fresh Jamaican patties while window shopping at the mall.
END_OF_DOCUMENT_TOKEN_TO_BE_REPLACED