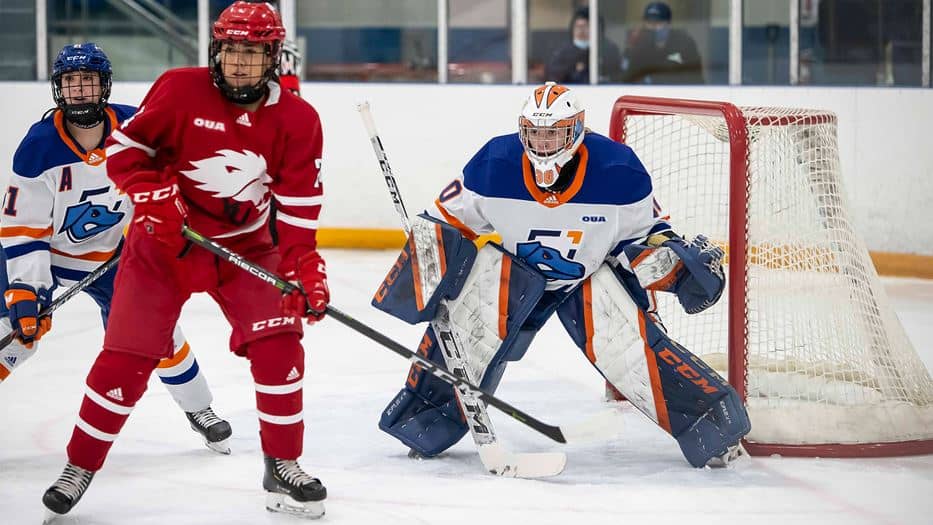 RIDGEBACK ROUNDUP – The hockey Ridgebacks enjoyed a near-perfect weekend, with the mens’ squad handing the Queen’s Golden Gaels their first loss of the season and the women’s team splitting a pair against the always tough York Lions.

The basketball squads’ weekend was not as rosy, but the teams earned some respect for hanging in against the powerhouse and many times-multiple champion Carleton Ravens.

In men’s hockey, the team ran up a 3-0 lead against Queens Friday night in Kingston before the Gaels clawed their way back to send the game to a shootout. The Ridegebacks got the upper hand in the penalty-shot contest and the Oshawa squad took home a 4-3 victory.

Cullen McLean, Matthieu Gomeric and Cameron Hough had the goals in regulation for the winners. Captain Jack Patterson scored the winner in the shootout.

The women’s team beat York Friday night 4-2 for their first win of the season before falling to the Lions in the re-match the next night, 2-0. Megan Johnston scored twice Friday with singles to Lauren Beaulieu and Mackenzie Krasowski.

The highlight for the mens’ basketball team on the weekend was Friday night when the team used a big second quarter to pull within one at the half against the defending national champion Ravens. Carleton eventually pulled away to win 95-72.

With several starters not available the Ridgebacks were no match for Carlton the next night, dropping Saturday’s encounter 110-57.

The women were also swept by Carleton, 82-50 and 83-59. Three players had eight apiece in Friday’s game while Jolesha Allen-Brown had a dozen Saturday.