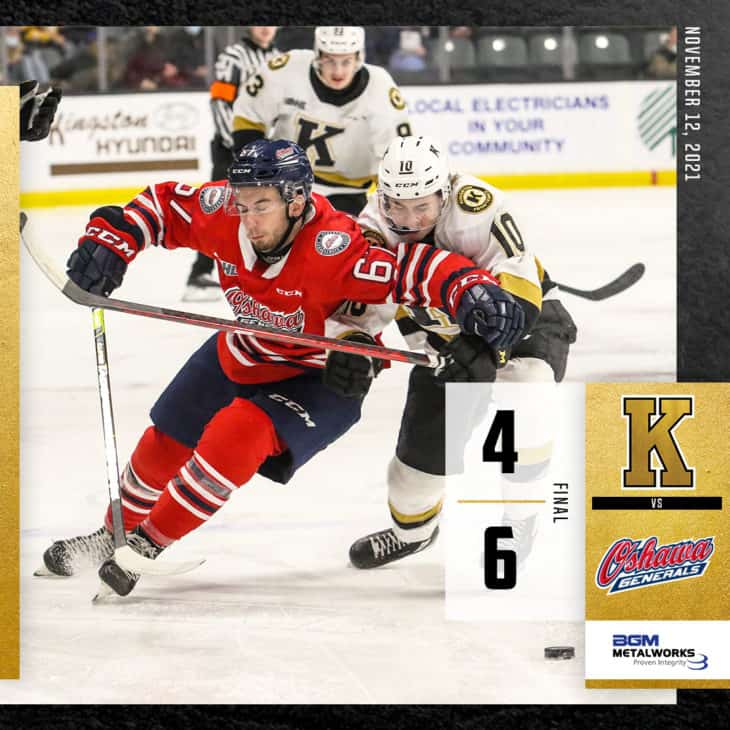 The Oshawa Generals went 1-2 in their first back-to-back-to-back weekend of the season to fall to fourth in the east.

The good news is the Generals are only four points behind first place Ottawa, who put the damper on the weekend with a 7-5 win at the Tribute Communities Centre Sunday night.

Vsevolod Gaidamak and Adam Varga each scored twice for the 67s.

Oshawa kicked off the weekend with a 6-4 road win against Kingston. Luke Torrance, Daniel Michaud, Matthew Buckley and Harrison gave the Generals a 4-0 early lead before the Frontenacs clawed back at the lead to pull within one by the end of the second. Dawson McKinney and Cooper Way – with his first OHL goal – rounded out the Oshawa scoring.

Saturday night in St. Catharines Oshawa took a 2-1 lead into the second period but couldn’t hold it, falling 3-2 to the Niagara Ice Dogs on Anthony Agostinelli’s game-winner. Calum Ritchie and Tullio had the Oshawa goals with homeboy Carter Bickle (Brooklin) earning his first OHL start.