Mississauga usually goes all the way for one political party during an election, and June 7 was no exception.

The Ontario Progressive Conservatives swept all six of the city's ridings in dramatic fashion, as Ontario elected a PC majority government with Doug Ford as the incoming premier.

It is the first time since 1999 that the PCs have elected any MPPs in Mississauga. Here is the breakdown of those six ridings: A reconstituted riding (which existed between 1999 to 2007) that saw a slew of new candidates vying to be its first MPP, Mississauga Centre saw PC candidate Natalia Kusendova prevailing over her rivals, the NDP's Laura Kaminker and Liberal Bobbie Daid.

Kusendova was elected with almost 41 per cent, outpacing Kaminker who came in second by a 6,000 vote margin, as Daid trailed in third place. A registered nurse, Kusendova will have an opportunity to bring her experiences as a front line health care worker to the Ontario Legislature.

While losing candidates are usually somewhat gracious in defeat, Kaminker, who already drew controversy in previous blog posts where she said she refused to wear a poppy and was critical of Remembrance Day, took to Twitter and essentially blamed the public for 'voting the wrong way.’ At least it’s refreshing to see someone being honest. 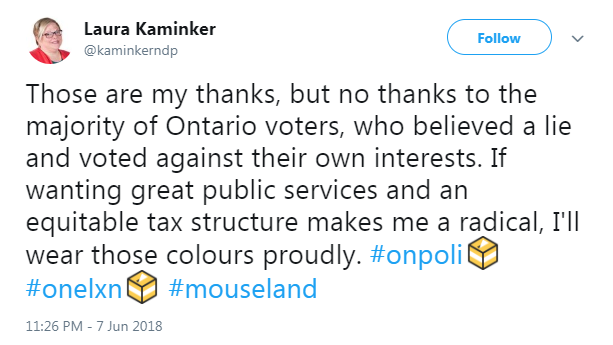 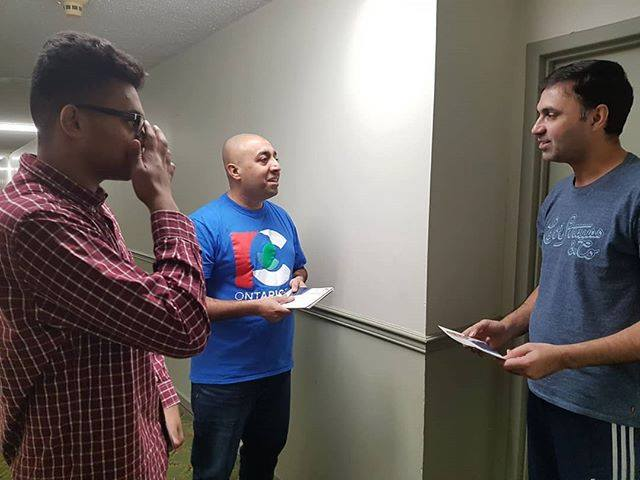 First time PC candidate Kaleed Rasheed, a Blackberry account manager, ousted Dipika Damerla, the two-term MPP running for reelection. Rasheed won with around 41 per cent of the vote, outpacing Damerla who ended up in second place with 30 per cent. The vote margin between them was around 4,000 votes. NDP candidate Tom Takacs came in third with around 22 per cent.

Damerla was the outgoing government's Seniors Affairs Minister, and her stronger result showed some effect from Kathleen Wynne's "resignation" as well as the outgoing MPP's own work in the riding on issues such as rental control, reforming the Condominium Act and informing residents about the Cooksville GO station reconstruction. In another riding without an outgoing MPP running, PC candidate Sheref Sabawy won easily with a 6,700 vote margin, ahead of NDP candidate Farina Hassan who came in second. Liberal candidate Imran Mian came in third place with around 25 per cent.

Another way of looking at this is that this riding was going to elect a “liberal” regardless; Sabawy previously ran for a federal Liberal nomination in the same riding, while local Liberals said that Hassan volunteered for federal Liberal MP Iqra Khalid and worked in her constituency office for a time.

Nevertheless, blue is blue and Erin Mills went along with the Tory tide, no matter whose name was on the ballot. 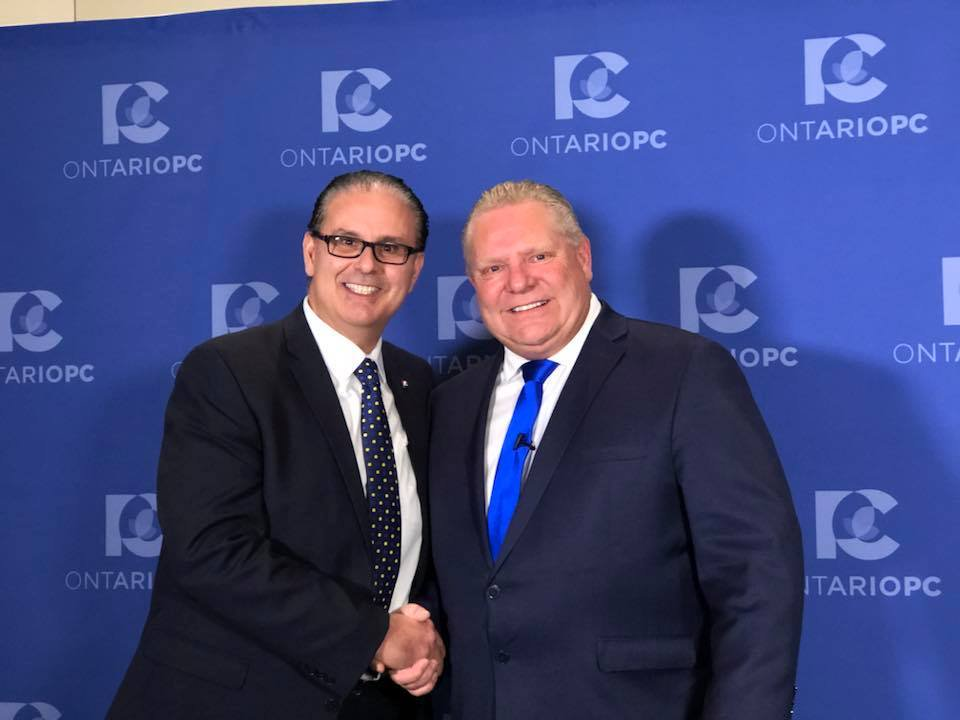 In a stunning upset, first time PC candidate Rudy Cuzzetto defeated Liberal Charles Sousa, the previous sitting MPP for this riding, finance minister and former 2013 leadership candidate. Sousa was the only other Liberal in Mississauga that came in second in his riding. NDP candidate Boris Rosolak came in third place, snagging 18 per cent of the vote. 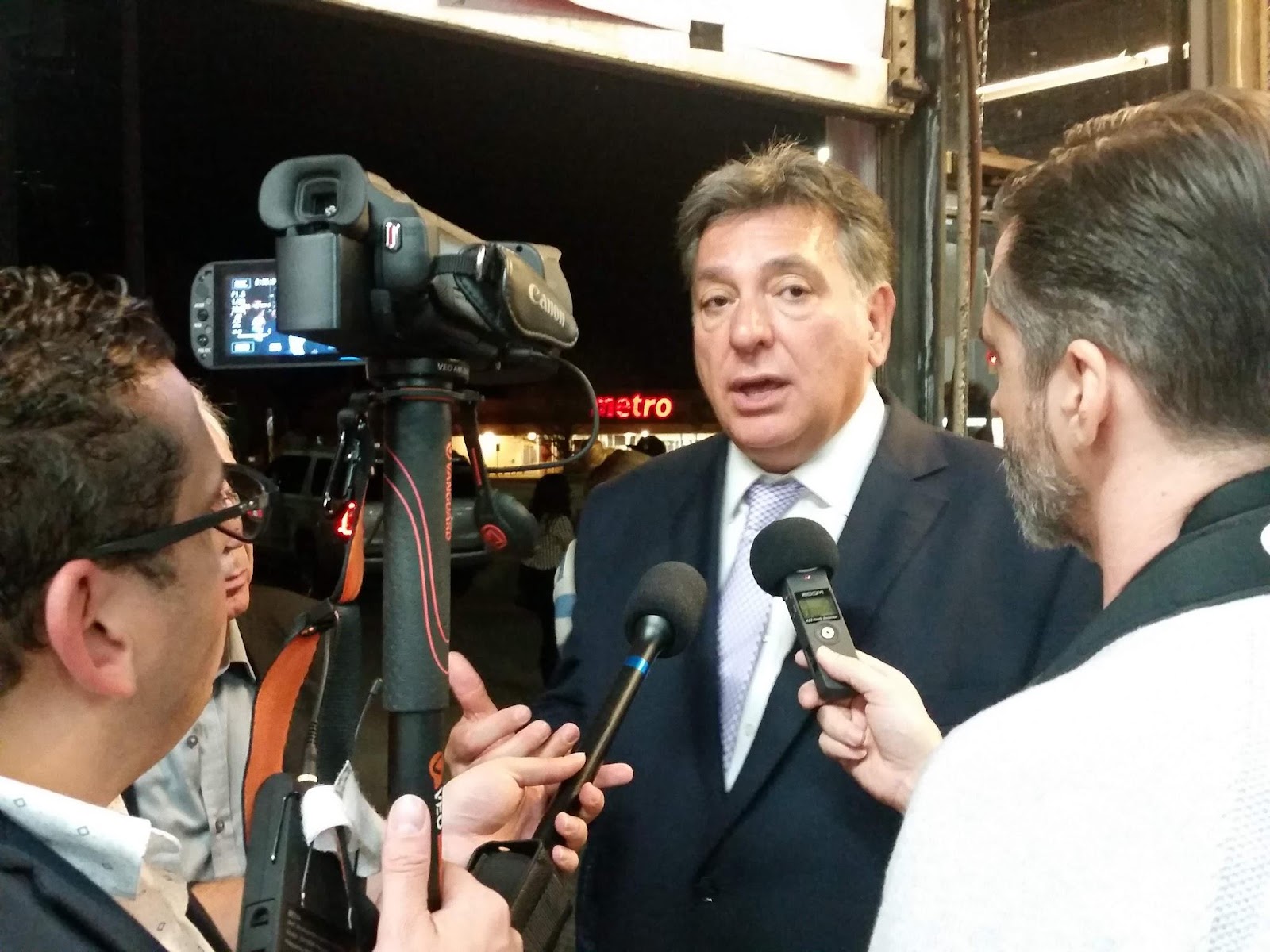 Cuzzetto is a vehicle auditor at Ford Motors Company. He was jubilant at his celebration party at the Crooked Cue in Port Credit. "I currently work for Ford, and after tonight…I'm still working for Ford!," joked Cuzzetto. 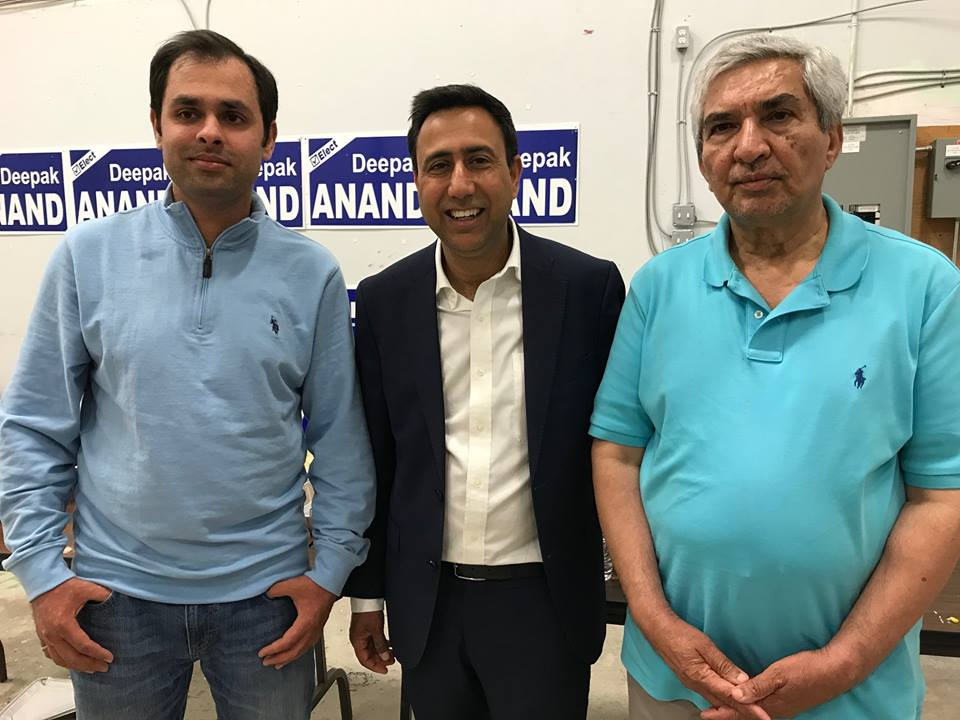 If the NDP was hoping for a breakthrough in Mississauga, it would be in this riding which was part of the former Bramalea-Gore-Malton riding that had Jagmeet Singh as MPP for a few years. Polls showed that it was a close fight between the NDP and the PC party.

In the end, PC candidate Deepak Anand edged out the NDP's Nikki Clarke by around 2,300 votes, winning with close to 40 per cent while Clark snagged around 32 per cent, the best showing for the NDP in Mississauga in this election. The Liberal candidate, previous MPP Amrit Mangat (the self described "Hazel McCallion's choice")  was neglected to a distant third place.

There was some concern in Tory circles that Caroline Roach, whose husband Clyde ran for the Tory nomination in this riding and who was running as an independent, would siphon disgruntled Tory votes from Anand, but in the end she only got around 3 per cent of the vote, so she wasn’t much of a factor. After running five times in federal and provincial elections dating back to the early 2000's, PC candidate Nina Tangri finally got elected.

She trounced Liberal MPP Bob Delaney, winning 43 per cent of the vote, compared to Delaney's 25 per cent, and it was actually NDP candidate Jacqueline Gujarati who came in second to Tangri.

Tangri previously ran against Delaney in Mississauga West in 2003, and in Mississauga Streetsville in 2007 and 2014, but all three times losing to him by a wide margin. Delaney had previously come under fire for calling the police on the mother of an autistic child who was protesting outside his office, as well as "proudly" saying he would triple the debt if it meant more 'investments' in government programs.

The outcome was not that surprising: Mississauga tends to go with whichever party forms the government, except in 1990 when the NDP took office. It would have been hard for even one Mississauga riding to buck the tide of change for the Tories going into this election.

Another thing to be said is the rise of the NDP. While they did not win any seats in this city, they became the second choice for all but two of Mississauga's ridings. Mangat and Delaney, despite being in office for over a decade, lost badly. The only exception is Sousa and Damerla, who at the very least were competent local MPPs. Liberals will have their work cut out for them in rebuilding in Peel, lest they want the NDP to become the altenrative next time around.

Overall, the Tories swept up Mississauga’s six ridings with relatively strong margins, despite all coming in under 50 per cent of the vote. But that's indicative of a first past the post that rewards 100 per cent of governing power to a winner with just 40 per cent of the vote, and that's something that has happened to all three political parties that have governed Ontario.

Until that system changes, this is what we have, and is still preferable to other countries around the world who don’t get to vote at all.

As for how things will turn out for Mississauga going forward, Mayor Bonnie Crombie said as the leader of "the Mississauga Party", she was looking forward to working with the new Ford government to ensure that the priorities outlined in the city's "Mississauga Matters" campaign would be met.

We will see if the incoming new PC government could deliver on their promises to Mississauga and the rest of the province.

For the local results in Mississauga and across Ontario, you can check the Elections Ontario website for those numbers.