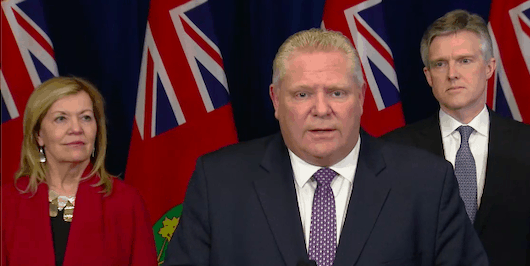 The Ontario government passed emergency legislation Thursday aimed at protecting workers who are forced to stay home due to the COVID-19 pandemic.

Premier Doug Ford promised the bill earlier this week and said it will apply to employees under investigation, supervision or treatment for the disease caused by the novel coronavirus.

Workers in isolation or in quarantine and those who need to provide care to a person for a reason related to COVID-19, including for a school or daycare closure, will be protected by the bill–which passed with unanimous consent from all parties to get it through quickly.

Ontario Premier Doug Ford says a suspension has also been placed on the renewal of drivers licences, plate stickers, and health cards.

Landlords were also told to suspend all eviction orders until further notice.

Ford said there would not be any penalties or legal ramifications for those who do not follow quarantine and isolation instructions, as there aren’t enough resources available to police such matters. Ford, instead, pleaded with the public to police themselves and follow instructions laid out by healthcare professionals; calling those who put others at risk “selfish”.

The Ontario government also addressed concerns regarding the strain on the health care system during the pandemic.

“We do know that the pressures on our health care system will increase,” said Minister of Health, Christine Elliot. “We are taking measures to increase the number of beds while looking at alternative measures that could see patients being move to other facilities.”

The province says it has increased the number of ventilators by 300 in an effort to treat the respiratory virus–even calling on auto and other manufacturers to assist in the manufacturing of ventilator devices.

An additional 43 cases of COVID-19 were confirmed in Ontario on Thursday, bringing the provincial total to 257 including one death and five resolved cases.

The number of cases under investigation stands at 3,972.

There are 772 confirmed COVID-19 cases across the country, according to Dr. Theresa Tam, Canada’s chief public health officer.

In the name of social distancing, there were only 24 members in the house during the emergency legislation: 12 governing Progressive Conservatives, eight New Democrats, two Liberals, one Green and the Speaker.

They were allowed to sit anywhere to ensure there is enough space between them.

The legislature is now expected to be suspended until March 25, two days later than it was previously set to return after March break.

Government house leader Paul Calandra acknowledged the unusual nature of the one-day sitting but conceded there could be more like it on the horizon as the Progressive Conservative government responds to the evolving situation.

“Like everybody else, I hope that this is resolved very quickly,” he said. “But until the medical officer of health tells us otherwise, this could be the new norm for the Ontario legislature for the foreseeable future.”

Calandra said the government has been in discussions with the opposition parties represented in the legislature and praised them for their co-operation in the face of the turmoil.

He said the government has taken the unusual step of giving the opposition in-depth briefings and taken some suggestions to amend the legislation.

“Look, it’s not going to be everything that the opposition has asked for, but we did make some changes,” he said. “But ultimately, they did agree that there would be very reduced numbers in the house, that we would speed up the passage. Debate will still occur, it will be quick.”

Calandra said the government will also introduce and expects to pass a second bill to enable municipal councils to met by teleconference during the pandemic.

He said the legislature is expected to sit for approximately 90 minutes this afternoon to pass both pieces of legislation.

NDP Leader Andrea Horwath said her party will support the expedited passage of the bill but is disappointed it will not contain more protections for workers.

“Ultimately, the measures being agreed to can only be seen as a small first step,” she said in a statement.

Green party Leader Mike Schreiner said he, too, will support the bill.

“In times like this, politicians must put partisanship aside to unlock support and assistance for people,” he said.