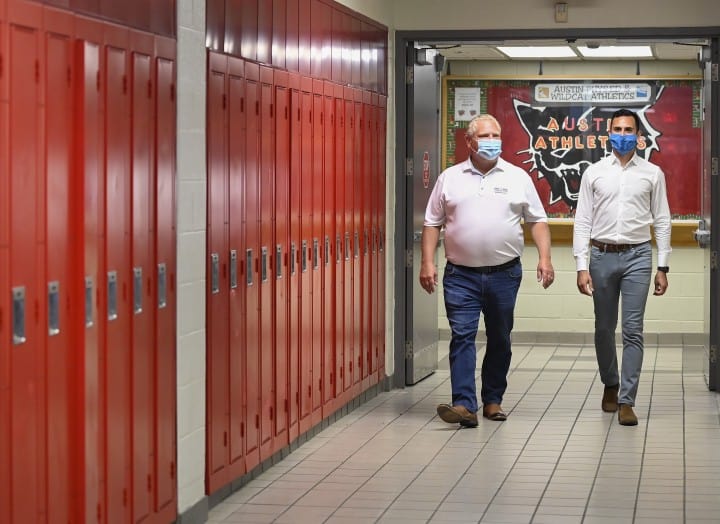 The Ontario and federal governments are announcing new funding to help support child care in the province.

The money comes as part of the Safe Restart agreement, a deal struck between Ottawa and the provinces that will see Ontario receive $7 billion in additional funding.

Ford says the child-care money will be used to enhance cleaning and public safety protocols for facilities including licensed daycare providers and First Nations Child and Family programs.

The government says it will be providing face coverings to all those settings, but did not immediately offer details of other measures the money would help fund.

Ontario’s daycare centres, which have been operating in a limited capacity since mid-March, are allowed to fully reopen as of September 1.

Meanwhile, Toronto Public Health is calling on the city’s public school board to implement smaller class sizes in its reopening plan.

In a letter to the Toronto District School Board, the public health body says it’s concerned about the risk of COVID-19 spreading if class sizes aren’t reduced.

It also says smaller class sizes are particularly important from kindergarten to Grade 3, where masks aren’t mandatory and physical distancing will be vital.

The health authority says teachers would be able to better control classes and prevent crowding in hallways if class sizes are reduced.

Ontario’s school re-opening plan does not include the reduction of class sizes for students from kindergarten to Grade 8.

Premier Doug Ford has faced criticism over the government’s plan, which opponents have described as underfunded and unsafe.