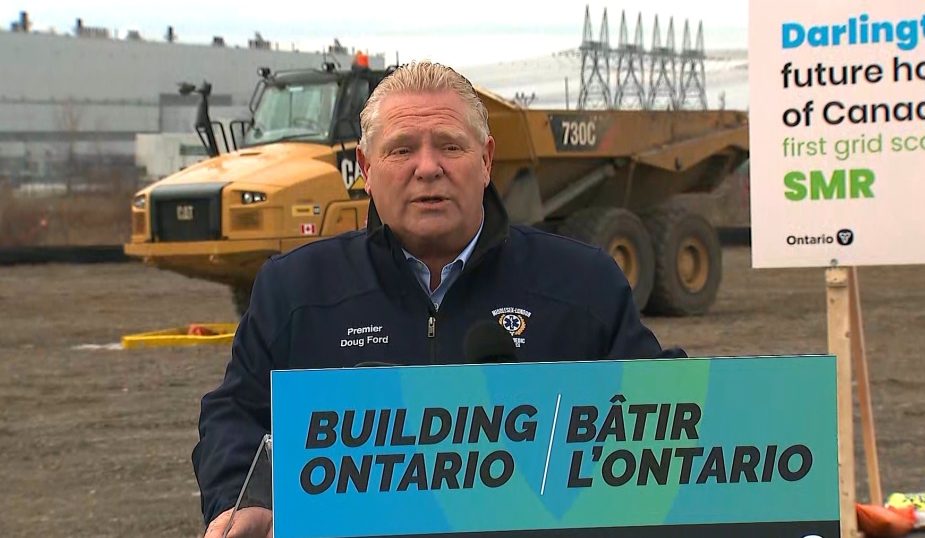 No shovels were harmed in Friday’s press conference at the Darlington Nuclear Generating Station but the proverbial ground is now broken for Ontario’s first grid-scale small modular reactor.

Premier Doug Ford, Energy Minister Todd Smith and a host of local politicos were at the Clarington nuclear plant Friday, one year to the day from when the BWRX-300 model was formally announced as the SMR of choice.

Ford said Friday’s announcement was another milestone in the province’s plan to build the reliable, affordable and clean electricity grid needed to enable electrification and attract more investment in the province’s economy.

“We need to find a way to meet the increasing demand for power in Ontario … (and) with global businesses looking to expand in jurisdictions with clean and cost-effective electricity, small modular reactors will help compete for and attract more game-changing investments in Ontario’s economy,” he said. “They are setting the stage for the next generation of clean, Ontario-produced nuclear energy.”

“It’s an opportunity for Ontario to show the world where the future of clean energy lies. It’s a made in Ontario solution.”

In March of 2022, Niagara-based E.S. Fox was awarded the contract to deliver early site preparation work, including water supply, electrical power, information technology and road services, paving the way for the SMR to be constructed by 2028. This work, valued at $32 million, will support more than 100 new jobs in Durham.

In December 2021, GE Hitachi Nuclear Energy was named as OPG technology development partner to deploy a BWRX-300 SMR at the Darlington nuclear site.

“Ontario is clearly leading the world when it comes to new nuclear technologies,” said Smith. “The Darlington SMR, part of our larger plan to ensure a reliable, affordable and clean electricity system, will ensure that we have the electricity we need to support our success in driving electrification and attracting new jobs to the province including unprecedented investments, from electric vehicles and battery manufacturing to clean steelmaking.”

The new SMR at Darlington will be Ontario’s first nuclear reactor build in a generation. The new project will deliver 300 MW of electricity, which is enough to power 300,000 homes. Darlington currently supplies 20 per cent of Ontario’s energy needs

“This project leverages OPG’s decades of experience in providing reliable, safe and affordable electricity as well as Ontario’s strong nuclear supply chain to develop the next generation of nuclear power,” said OPG President and CEO, Ken Hartwick. “The electricity produced by the SMR at Darlington will help ensure we meet Ontario’s growing energy needs, as electrification drives demand.”

Canada’s first grid-scale SMR at Darlington is part of the Ontario government’s larger plan to meet emerging energy needs and ensure a reliable, affordable and clean electricity supply including: