Oakville teen recipient of $8,000 bursary for efforts on the ice and in school 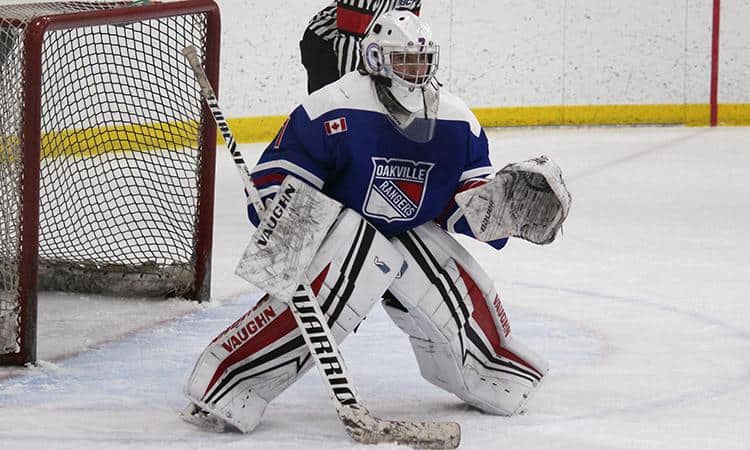 Oakville native Alex Pedersen is one of five recipients receive an $8,000 post-secondary bursary from Dairy Farmers of Ontario. OMHA PHOTO

On the ice or off it, Oakville’s Alex Pedersen works to be a leader and set a good example.

As a goaltender with the Oakville Rangers, his work ethic on the ice during practices has certainly rubbed off on his teammates.

Rangers coach Mark Moro recalls how Pedersen wouldn’t allow a puck to get past him.

“The team saw how hard he worked in practices and it forced them to work hard if they wanted to get a goal,” Moro said of Pedersen, who is one of five high school students this year to receive an $8,000 post-secondary bursary from Dairy Farmers of Ontario.

In addition to the his efforts with his team in the Ontario Minor Hockey Association (OMHA), Pedersen is also being recognized for the impact he’s have made in his school and community.

Like how he has helped mentor his peers at St. Thomas of Aquinas Catholic Secondary School.

The Grade 12 student served in his school’s RAM Mentorship Program in which senior students act as mentors and role models for Grade 10 students.

Pedersen participated in the program when he first began at the school and is now paying it forward.

“When I first started grade nine at STA, I moved to a new school and didn’t have many friends, and one of my best friends was my mentor from Grade 9,” said Pedersen.
“So, when I had that opportunity to become that mentor for someone else, I took the chance.”

As well as being part of his school’s Senior Fest planning committee, Pedersen spent time volunteering at a goalie school helping fellow goaltenders in the area.

The Oakville teenager also volunteered as an assistant coach with an U-15 team and even officiated games.

As for what’s next, Pedersen will be attending Western University’s Ivey School of Business next year.

“I’m interested in the relationship side of business. I really enjoy working with people and making relationships and going from there,” said Pedersen.
Other winners of an $8,000 post-secondary bursary from Dairy Farmers of Ontario this year include Dani Karn (Embro), Owen Oelschlagel (Centre Wellington), Tristin Tsokos (Brighton) and Rory Walinga (Guelph).

Applications for 2023 Bursary Program will be announced early next season.

“It’s impressive to see the things our players are doing as leaders both on and off the ice, especially the five who have been chosen this year for the OMHA-Dairy Farmers of Ontario Bursary,” said Ian Taylor, Executive Director of the OMHA.

“The OMHA and Dairy Farmers share a goal of developing great people who will become leaders in their communities. I have no doubt our five recipients will be among them.”