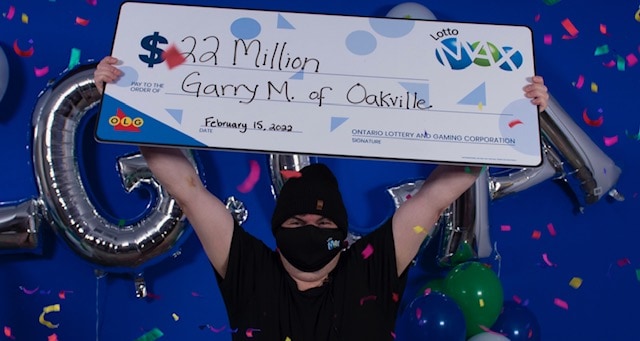 The 56-year-old IT employee and his wife are $22 million richer after winning Lotto Max’s top prize in the January 18 draw.

“It was a surreal moment,” said Myles, who was numb with shock after realizing they had won $22 million. “Everyone dreams about winning the lottery but I’m pretty sure no one expects it.

“It’s unbelievable to think I am the guy whose dreams will come true.”

Oakville’s newest multi-millionaire says he purchased his Lotto Max ticket on OLG.ca. He signed up for the lottery subscription to ensure he would never miss a draw.

“I have been buying lottery tickets occasionally for about 20 years, but I had a tendency to forget to purchase tickets ahead of the draws, so I signed up for the lottery subscription on OLG.ca two years ago,” he shared while at the OLG Prize Centre in Toronto to pick up his winnings.

Myles said when he received an email that morning it looked different than one’s he’s received in the past.

“At first, I thought I won $22 and a Free Play, which I thought was an odd amount to win,” he recalled. “Then I looked again, and I thought I saw $22,000. I kept looking at it and counted all the digits – that’s when I realized I won the jackpot!”

The early morning win also came on the same day of his wife’s 50 birthday.

“She was wondering why I screamed, so I called her over, showed her the screen and said, ‘Happy Birthday!’ and in the blink of an eye our lives changed for the better,” Myles said.

Myles and his wife shared the news with their kids by bringing them to the computer and getting them to click on the lottery winning link.

“They were astonished – I won’t repeat some of the words that they used,” he laughed.

Myles already has already made a to-do list for things to purchase with the winnings, with paying off his mortgage, traveling and sharing the winnings with his family right at the top.

“I’d love to start with a relaxing trip to the beach then I will explore Europe and re-discover music in Vienna, spend some time in Prague, and experience a musical Scottish tattoo,” he shared.

“Thinking about receiving a cheque for $22 million makes me giggle. I don’t know if being a multimillionaire will fully sink in until I’ve done something big, like pay off my mortgage,” he added.